Will The Cal Bureaucracy Keep Athletics From Making The Most Money Possible Off Of New Memorial Stadium?

The Haas School Of Business Report on paying off the California Memorial Stadium upgrade has major concerns regarding rental revenues from the stadium. Let's find out more in the second part of our look at the report.

Share All sharing options for: Will The Cal Bureaucracy Keep Athletics From Making The Most Money Possible Off Of New Memorial Stadium?

In 2012, Cal unveiled the gorgeous new Memorial Stadium facility, including an upgraded stadium and High Performance Center. This sparkling beauty on the hill cost a pretty penny (over $400 million!!!). The larger question was "How will Cal afford all this debt?" In the short term, Cal doesn't have to pay the principal of the debt and only has to make interest payments. However, starting in the 2030s, the principal of the debt comes due and it could become financially crushing to Athletics, Berkeley, and even the UC system.

1. Event marketing revenue for the University Club and the Field Club. This area is the two skybox areas that hold events.

2. Third party stadium leases and rental of plaza level of the stadium. This is the ground level, including the stadium itself and the Goldman plaza.

According to the report, 6% of all income from 2013 and 2053 is projected to come from rental sources. Regarding the first section (rental revenue from the University and Field Clubs), per the report, it is projected that in 2013, the event marketing income will be $162,500 and by 2053, it will be $2,743,516. These numbers are based on a series of assumptions about future bookings and it is unclear how accurate they will end up being.

In regards to the second section (third party leases for the ground level), the report is somewhat confusing to me. The report states that there are two Memoranda Of Understanding with two prospective tenants for leases. However, the two tenants are Cal - Recreational Sports and the Haas School Of Business. I am sure that it is prudent to keep separate things separate and I am sure that each of these entities are run independently of each other. Nonetheless, money that flows one part of Cal to another part of Cal doesn't seem as helpful as outside funds coming into Athletics. It doesn't seem to me like a net boon to Cal as an overall entity. On the ledger line, it may look like Athletics is benefiting (and it is), but another area of Cal is losing money, then. A better situation is when all parts of Cal are making money!!

The report notes that much of the plaza level is not 100% finished. Apparently, they have not yet decided how to pay for these improvements, whether it will come all from Athletics, all from the tenants, or some combination thereof. So, there are additional costs lurking out there.

The report then discusses speedbumps to really taking full advantage of the leasing opportunities here. For example, ground level space that could be used for retail is currently being used as Athletics offices. Additionally, the kitchen amenities are limited at the stadium. Not only are they apparently small, but they are far from the University Club, making it difficult to provide catering for events. The stadium is set up more to be a "gameday" facility as compared to a year round facility. As such, it doesn't look like Athletics will be able to take the fullest advantage of its rental opportunities.

The next problem that Athletics faces in fully realizing the rental potential is, well, the Cal bureaucracy. It's knotty and ugly and it might be the largest impediment here. The report notes that another agency (the UC Berkelely Foundation Real Estate Task Force) provided a report stating that Cal could potentially get $2.9 mil a year in rental revenue, which is well above what Athletics itself forecasts. The report forsees a series of rental opportunities (such as a year round Field Club Cafe, University Club as a year round restaurant, and a yet to be built parking structure at Maxwell nee Kleeburger).

Table 8, outlined below, shows what Cal could potentially do with the space: 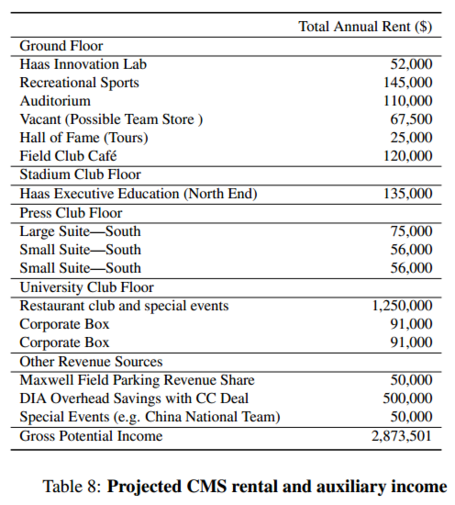 That is how the report reaches the $3 mil a year in potential rental income. The problem with producing all of these great ideas is how decentralized Cal is when it comes to management of its real estate. The report produces figure 7 showing the Cal bureaucracy for managing real estate: 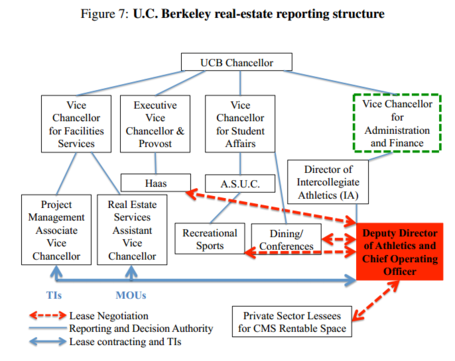 OUCH! Look at this thing. I can't figure it out myself. You'd need a Boy Scout to untangle these knots. You have a bunch of people responsible for Lease Negotiation. Those people are separate from Lease Contracting and Tenant Improvements. And everybody reports to somebody else! So, you negotiate with one Vice Chancellor, you get final approval from another Vice Chancellor and you have to keep 5 different groups in the loop the entire way. This may be why Birgy brought in Bain Capital to try to re-org the entire school bureaucracy and make some sense out of all of this.

To negotiate, finalize, and execute contracts requires discussions with many different Vice Chancellors and their teams, plus the ASUC. Getting all these approvals unnecessarily takes time and resources that could be better focused elsewise. Just trying to make sense of the paragraph(s) in the report explaining this process is confusing my weak brain. TWIST BRAIN HURT!! You can easily imagine how complicated it is.

Let's get more specific. The real problem here is that the Vice Chancellor for Administration and Finance is technically Athletics reporting agency. That is Sandy's boss. But they do not have direct authority over the leasing strategy. Athletics' COO (Solly Fulp) is the go between between that Vice Chancellor and the other entities here (each of which has "absolute veto power"). I do not envy Fulp for his job juggling all the plates here.

The report is clear: only by realigning the Cal bureaucracy for maximize efficiency in decision making can Athletics potentially gain the millions in rental revenue to help pay for the stadium upgrade.

The next section is brief and it talks about philanthropy. There isn't much here. Just one paragraph. A discussion on donations to the school could easily be its own report. The only thing it really notes is that the gift from Lisa and Douglas Goldman (for which they got a plaza name in return!) has some strings attached. One of the strings is that Cal has to turn the Goldman plaza into a vibrant, year round community space. As outlined above, there are some challenges here due to the Cal bureaucracy. So, not only does this bureaucracy threaten the rental revenue, but it also threatens potential (and apparently actual donations) to the school. Not good!

The report doesn't provide a lot of information here. New media revenue (like Pac-12 network money) is its own topic, which is complex. We've written much on it. The report notes that forecasts place 19% of revenue as coming from new media.

The report puts about 2 sentences into this. Basically, the new ticket sales team is more aggressive and it appears to be working well. Fin.

In regards to financing the stadium, the Report has mostly looked at how Athletics will raise money. They've looked at ESP seats, rental revenue, and other revenue sources. There is a section here in the Report on potential risks to that revenue. For example, what if an earthquake ACTUALLY happens! That is what all the work was done for. I mean the chance of an earthquake happening between now and the 2050s (when the debt is supposed to be paid off) is moderately high. This could force Cal to play football elsewhere and limits the usage of the stadium as a rental facility, severely limiting revenue sources.

Another ever present concern is football team failure. A large chunk of revenue for the funding plan is predicated on ESP seat purchases. If people don't buy seats, Cal doesn't get money. As simple as that. With a 3-9 record in 2013, Cal did not start off on the right foot at New Memorial. Of course, that is its own story and many posts have been and will be written about the success and/or failure of the football team.

Under Cal's projections, they will pay off all of the stadium debt by 2053 and have hundreds of millions left over to spend elsewise. We'll see how likely these projections are. In the previous post, we discussed some of the problems that underlie Athletics' ESP seat sale projections. Here, we mostly discussed income derived from rental of various parts of the upgraded stadium facility. In regards to these rental projections, they seem moderately unlikely due to massive problems with the UC Berkeley bureaucracy. With a overhaul of Berkeley itself, perhaps the projections could be achieved or even surpassed.

By looking at the report as a whole, I feel confident that Cal can accomplish its goal of paying off the debt on time. Even though there are major concerns regarding the rental revenue, it is only projected to be 6% of all revenue here. The lion's share stems from the ESP seat sales and investment of those sales proceeds. To accomplish the debt payoff on Cal's preferred timeline, they pretty much just need to stay the course, sell all ESP tickets and prudently invest the resulting millions.

So, the bottom line is "Just Win, Baby!" That's the solution to and cause of all the world's problems. GO BEARS!