The results from our first round of 2013 season have plenty of uncertainty, but suggest the Bears should attain bowl eligibility.

Share All sharing options for: 2013 Cal Football Season Predictions: Bears on the Precipice of Bowl Eligibility

Last month I asked you all to predict the Bears' chances of defeating each opponent this season. With one of the toughest schedules in football, Cal faces a tough climb from a 3-9 season. But you were undaunted in placing your predictions. We received 400+ responses and I thank each of you who participated. Now let's take a look at the fruits of your labor.

In the following table we have the chance that Cal defeats each opponent, taken from the average of everyone's predictions.

What immediately stands out is that Cal is heavily favored in only three games: Portland State, Washington State, and @Colorado. While I am rather confident in our ability to take down the Vikings and the Cougs, I am less enthusiastic about the trip to Boulder. Cal should win, but Boulder can have an unpredictable environment in November.

Also notable is that Cal is a heavy underdog in only two games. The trip to Eugene is always daunting, although the Ducks should not expect a perfect transition from Kelly to Helfrich. Cal certainly has its work cut out against the Ducks, but Oregon may not be the well oiled machine we are used to seeing. Cal's other tough match is against Ohio State, a team we should have beaten last September. A steady dose of Bigelow should be enough to rustle the Buckeyes' jimmies.

After those matches is a bunch of toss-ups. Seven games' outcomes are between 40% and 60%. Four toss-ups are at home and three on the road. Three wins should earn Cal a bowl berth (assuming we defeat Portland State, Washington State, and Colorado). Four wins will definitely get the Bears a bowl berth. Anything beyond that is just gravy.

With toss-ups occurring against Oregon State, Washington, and Stanford, these games will play a big role in determining where Cal finishes in the Pac-12 North Standings. In fact, other than the game against Oregon, all conference games are up for grabs.

While the schedule is front-loaded, Cal doesn't begin facing its toss-up matches in conference play until mid-October, by which time the team should have a basic grasp on the Bear Raid. If Klinedergoff quickly becomes proficient in the Bear Raid, Cal could build some late-season momentum heading into a potential bowl berth.

While the schedule is merciless, Cal has a chance to be competitive in each game except possibly at Oregon. The Bears will be underdogs more often than not, but they have a solid chance to upset several teams.

Here is a look at the prediction spreads for home games: 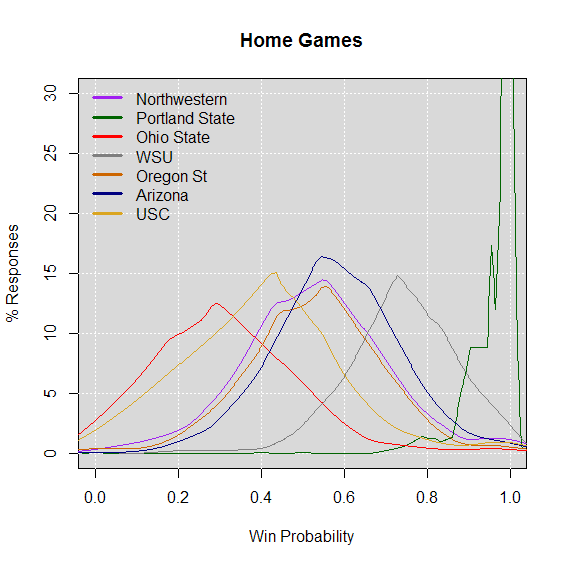 Portland State is obviously the likeliest win, followed by Washington State then Arizona. Interestingly, Northwestern and Oregon State's distributions are nearly identical. While an additional conference win would be nice, I'd rather see the Bears defeat Northwestern.

Despite ineptitude on the sidelines and questions at quarterback, USC appears to be our second-toughest home opponent. On paper, the Trojans should be one of our easier home games, but that nine-year losing streak looms large in our minds. Not surprisingly, Ohio State will be the toughest home game.

Cal will have to win at least four home games in order to get a bowl berth.

Now let's take a look at those road games. 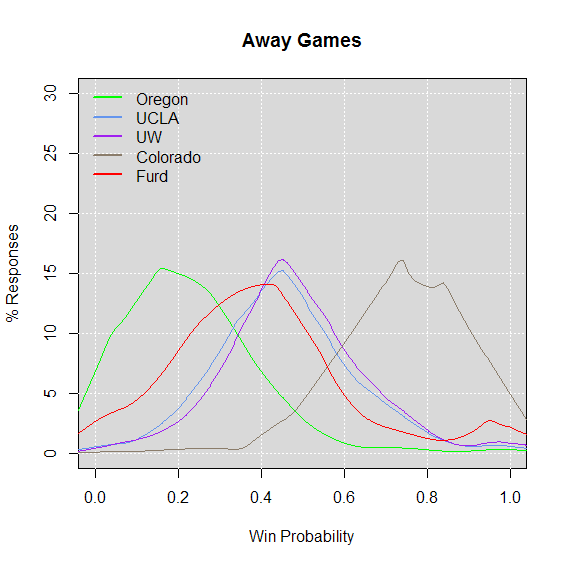 Colorado is clearly the easiest road game, followed by a tie between UCLA and UW, then Stanford, and then our feathered friends up north. Cal must win at least two of these games to have a solid chance at bowl eligibility--so who is getting upset on the road? UCLA? UW? Furd? I'd be happy with a win over any of them, and thrilled with a win over all of them.

Kudos to those of you who contributed to that little spike around 100% in the Stanford win probabilities.

I took the pool of submissions and used them to simulate the entire season one million times. Below I've plotted the results, with the y-axis indicating how likely it is that we win that number of games. 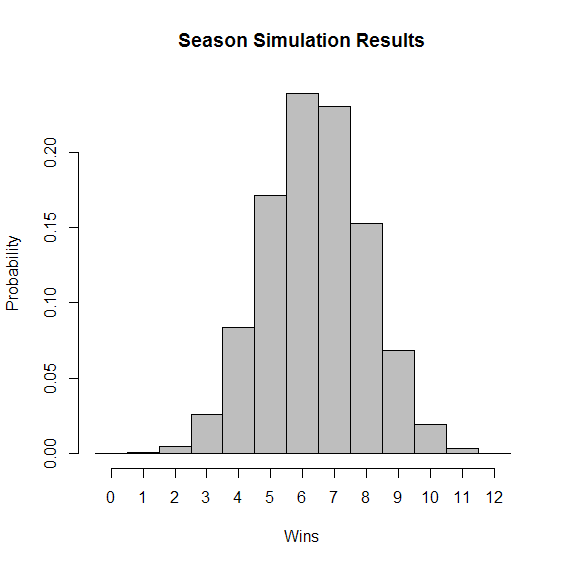 Winning six games is most likely, followed closely by winning seven. The exact probabilities are in the table below:

We have a 28.66% chance of sitting out another bowl season. At the other end of the spectrum, we have almost a 10% chance of winning 9 or more games. I could accept that outcome. Of course, the meat of the outcome is right in the middle around that delicate precipice of bowl eligibility.

Finally, this post would not be complete without handing out our usual slate of awards. We have made some changes, however, to reflect the new era of Cal football. Our two regular awards, Tedford's Sunshine Pumpers and the Old Blues, have been officially retired and assigned names more appropriate for the Sonny Dykes era.

First we have Sonny Delight, given to those with the most optimistic predictions.

Look at that: two predictions of 12-win seasons! Keep on pumping that sunshine! I hope you all deal well with disappointment.

Next we have the Sonny Yikes! award for the least optimistic among us. 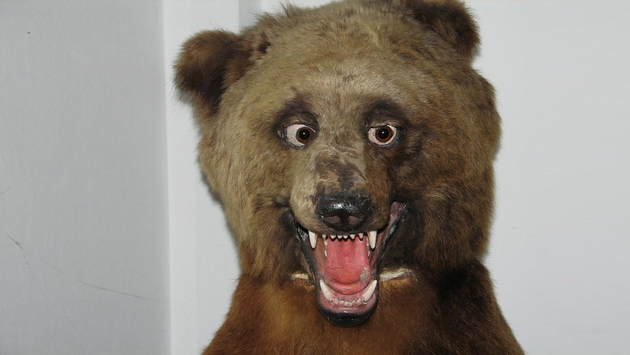 And of course, a list of pessimists would not be complete without puresilence.

Here's a fun fact for the extra pessimistic among you: last season only two of us expected the Bears to win 3 games or fewer. If the same rule holds, we're winning only two games this season. PUMP PUMP PUMP.

Finally we have The Voice of Reason, given to those whose predictions for each game were closest to the community's average predictions.

You all are just so reasonable, aren't you?

Thanks for participating! We will see you again for the next round of predictions just before the start of the season.