Thanks to TheScientist019 for transcribing!

Bryce Treggs (BT): You wanna get on the good side?

Lindsay Brauner (LB): I'm just gonna say Bryce and I have the same good side, so I'll be the bigger person and let him have it tonight.

BT: I appreciate it.

LB: Hi, it's Lindsay Brauner here with Bryce Treggs. Bryce, thanks for joining us. It's after the first day of spring practice, how do you think it went?

BT: I think it went pretty good for the first day. We're still trying to pick up the new offense a little bit, but for the most part, it was a great day.

LB: What was your favorite part of practice?

BT: Stef McClure did pretty good, so I gotta give him his credit, but he wasn't on my side, so I didn't get a chance to go against him. The best part of practice was going deep. That's what I like to do-I like to go deep and catch 40-yard passes, 30-yard passes, stuff like that, so that's like the highlight for me.

LB: What's the look you would give Stanfurd?

BT: I smile at Stanfurd.

BT: Because we're gonna get that win this year, so I'll be happy.

LB: How do you like your coach? It's your first day with him.

BT: I love my coaches, all of them. [Outside Receivers] Coach [Rob] Likens, [Head] Coach [Sonny] Dykes, the Inside Receivers Coach [Mark Tommerdahl]. Everyone on the staff I really have a good relationship with and I like a lot.

LB: Can you give me your best mean mug? 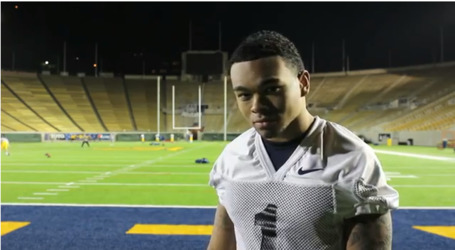 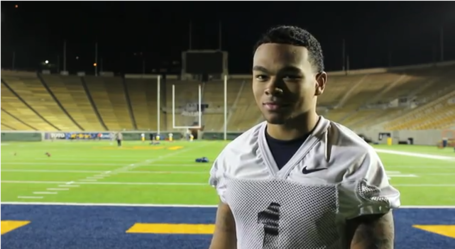 LB: It's getting a little closer... 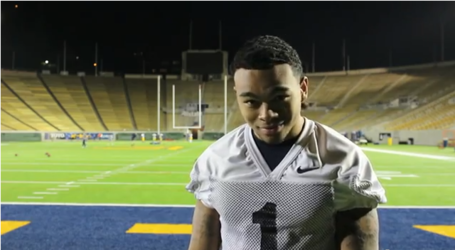 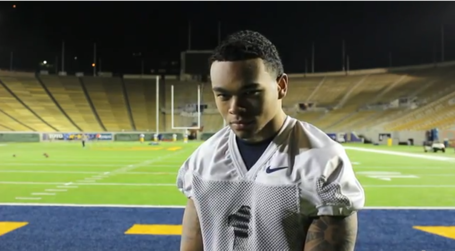 LB: Ah! That was pretty mean!

Bryce Treggs talks about his dad, the Heem Team, and more (via Lindsay Brauner)