Football: How long will it take for the Dykes/Franklin system to become effective?

Marching down the list of preseason questions for the football team, we're at #6: how long will it take for the Bear Raid to be effective?

Share All sharing options for: Football: How long will it take for the Dykes/Franklin system to become effective?

LeonPowe: The question becomes really— what do you mean by effective? Does it mean scoring points or does it mean winning games? I think we'll be putting up points right away right out of the gate, but at least 35+. But I am not sure how that will translate into wins and losses - does the fact that our league is used to playing Oregon mean they're better prepared for ultra-high-tempo offenses? Or does Oregon's success mean that the Pac is susceptible to the speed (or is it because Oregon has better athletes like LaMichael and Kejon Barner).

Nam Le: If we want to define it by wins, I don't think those will really start coming until next season as it is. If we want to define it as resembling the warp-speed, point piling attack found at Louisiana Tech last season, then my answer would be the same—I personally think that the offense won't fully click into place until next year. Of course, I expect that simply by implementing the Bear Raid, that we'll do a lot better across the board—yardage, points, etc.—than we did in 2012, but we won't full tap into that scoreboard exploding potential of Franklin's offense until 2014. Put another way, what you see this season will reach full effectiveness another year from now, once there aren't so many parts to be replaced.

Leland Wong: I'm hardly an expert at WAC football, but according to the all-knowing Wikipedia, La Tech ran a multiple/pro-style offense in 2009, the year before Dykes and Franklin took the reins of the Bulldogs. Gee golly, that sounds familiar! Tedford was known for being a master of the pro-style offense, so it sounds like getting the last pro-style players of the Tedford era to adapt to the Bear Raid is not an entirely new task for Dykes and Franklin. With that in mind, I think it might be interesting to see how long it took for the two to install their system down at Ruston.

From the La Tech website, we can find all the offensive statistics from 2009–2012, listed below. 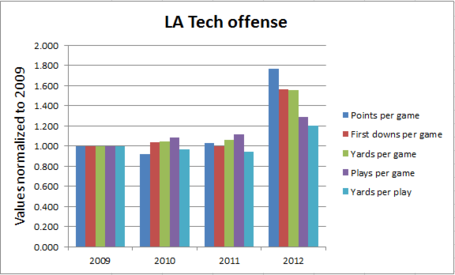 The graph shows the data with each statistic normalized to the 2009 measurement. This way, we can see how much the Dykes system improved in each category (or regressed). Despite the famed easy installation of their offense, the Bulldogs did not show any mind-melting improvements in 2010 or 2011. While both years showed a decrease in yards per play, that's a slightly misleading statistic; ultimately, both years had more plays per game and more yards per game. 2010 had a slight drop in points per game, so perhaps Dykes/Franklin had a little trouble in getting the offense to finish the job.

Disclaimer: there is a poopload of variables when it comes to football offense and the WAC is not quite the Pac-12, so this is hardly a prophecy for what to expect of our Golden Bears. But, with all the struggles of the Tedford offense, it's possible that an incomplete Dykes offense would still be a big improvement. In fact, Dykes's low of 26.8 points per game in 2010 is still better than our 23.0 in 2012. Based on their history at LA Tech, Dykes and Franklin might be effective in 2013, but the Bears might need a few years for the Bear Raid to reach its potential and live up to the hype. Let's give them a few years before we start making "FIRE DYKES" signs.

Sam Fielder: Great stuff there Leland. I think that the Bear Raid system will be effective this year, but I still think that Years 2 and 3 (2014 & 2015) will see the biggest jump. However, I am interested to see if the higher caliber of athletes that Cal has makes the transition quicker. Surely there will be some influx of system type guys, but it seems like the team has bought in and I think that improvement will be less about teams not being able to keep up and more about Cal executing well and better play-calling.

Scott Chong: I think that the Bear Raid will be effective immediately with regards to offensive production. I look at what Sonny Dykes did with the Arizona Wildcats. In 2006, they were one of the worst offensive teams in the nation.(116-117th) When Dykes became coordinator in 2007, they set all sorts of school records and were 2nd in the Pac-10 in total offense at 300+ yards per game. I think the Wildcats' situation is similar to what we have now; a talented roster that wasn't used to its full potential the past few years. Also, tremendous improvement on both sides of the ball was overlooked due to the hardest schedule in school history. Wins and losses may not be the best metric for us this coming year.

I agree that we should be better in 2014 once we have a more seasoned QB and Oline. For this upcoming season, I think that we'll be inconsistent. There will be flashes of a dynamic, up-tempo attack mixed in with growing pains. However, I think that our best players will be highlighted and given a chance to make plays. (Cough. Free Bigelow. Cough.) If nothing else, I doubt that we'll see kneel-downs, or draw plays on 3rd and long.