Suffice to say, Cal fans may very well have forgotten what effective offensive line play looks like. Despite repeated evidence to the contrary, most teams don't let edge rushers run untouched to blindside the quarterback. Or bullrush their way over and through an interior blocker. Or create confusion with a stunt that lets an unblocked blitzer plant the QB like a camellia bush. Or...I'll just stop there. Good footwork is just as if not more important than hand fighting and brute strength for solid offensive line play. Classic pass protection techniques call for power steps(inside foot) to check interior rushes and kick steps(outside foot) to stop outside rushes. In both cases, these initial steps are followed by a slide step to regain balance.

As a continuation of our Bear Raid preview (Part One is here), our focus today is on the new offensive line pass blocking scheme.

1. Set in place. Drive the post knee(inside) to the ground (prevents standing up).
2. Move the set foot(outside) to establish stagger and to cover the man.
3. Time the punch.
4. If defender rushes outside, kick step and stretch the defender. Keep the heel of the set foot on the ground (prevents leaning)
1st step - Kick(outside foot)
2nd step - Slide(inside foot)
3rd step - Kick
4th step - Slide

Vertical Set Pass Protection is a different blocking technique that has gained popularity amongst spread teams over the past several years.

Instead of setting and punching immediately at the snap, the Cal linemen will first retreat a set distance before taking an anchor step to form themselves into a unified wall.

1) By setting up several feet behind the line of scrimmage and then retreating, it forces the pass rushers to cover more ground in order to get to the quarterback.

2) Increasing the distance takes away the defenders' leverage. They can't explode from a low-pad level because they first have to get upright and run forward before they can even make contact with a blocker.

3) Standard twists, stunts, and blitzes are easier to read because retreating buys more time for the offensive lineman to see where the defensive players are coming from.

In theory, if you combine Vertical Set Pass Protection with a quick passing game, the pass rush should have a lot of trouble getting to a good quarterback. How frustrating can that be? Re-watch the 2004 Holiday Bowl and watch how little pressure the Cal defenders where able to apply to the Texas Tech QB. 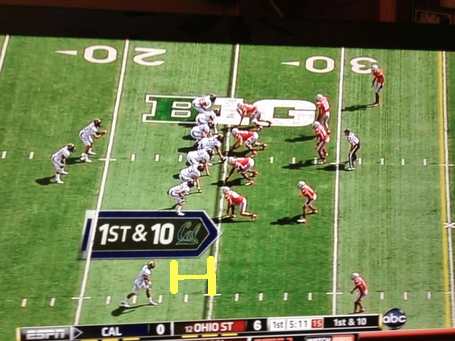 Now here's how LaTech lined up last year. Notice that both guards and tackles are about two yards back from the line of scrimmage in a straight line instead of in a slight arc. It's 3rd and 4. LaTech goes with four wides and one lone back. Texas A&M is in a Cover 2. 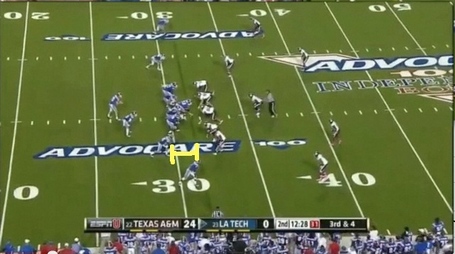 A second after the snap, the entire line has retreated two yards behind their original position. Notice that the Dline has yet to make contact. 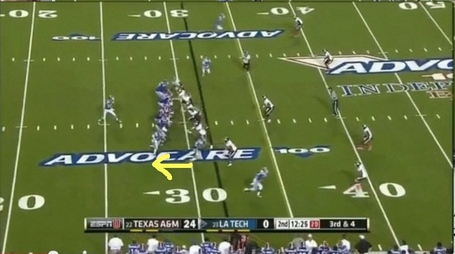 Two seconds after the snap, the line has "anchored" itself four yards deep from its original set. The slot receiver from the top of the screen has run a slant in between the two linebackers playing underneath zones. 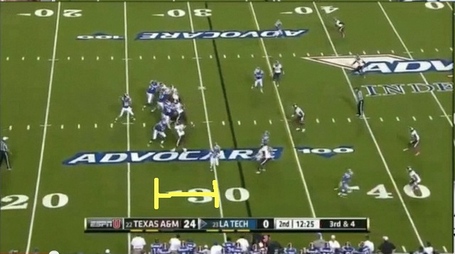 By the three second mark, a pocket has formed around the quarterback. He quickly zips the ball to his open slot receiver and moves the chains. None of the hard-rushing defensive linemen are able to get to him in time. 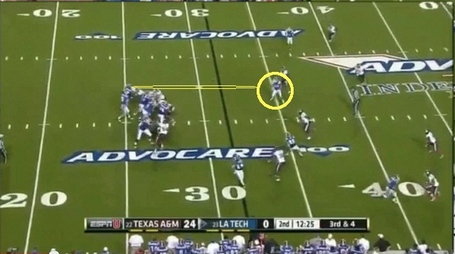 You can read more about it here from a local coach who has attended several of Cal's practices.

And for those who are interested, here's an informative read on how to attack the Vertical Set.

So, does this new technique actually work? There are questions about whether backpedaling makes you vulnerable bullrushes and whether you can run effectively out of such a deep set.

Looking at LaTech during their Dykes era:

For comparison's sake, here are Cal's sack #'s: (Avert your eyes if you have a delicate constitution.)

I don't have any insight why 2011 was a down year. But the numbers from '10 and '12 look great, especially if you factor in an explosive passing offense.

Like any technique, it'll take commitment and practice. What's promising is that the first year of Dykes/Franklin produced a solid Oline despite relying on several young players. It was certainly more competent than anything we've seen lately. By the time this line grew up in 2012, it featured three seniors and two juniors who worked together very well. Despite being a top-ranked unit, only one player was drafted (Jordan Mills, OT, 5th round, Chicago Bears), and another signed as a free agent. (Oscar Johnson, G, UFA, Tennessee Titans) Clearly, the whole was more than the sum of its parts.

How quickly Cal's young offensive linemen learn on the job may be a bigger story than the QB competition.