Golden Nuggets: Cal Is Among the Nation's Best Schools at Turning Elite Recruits into NBA or NFL Draft Picks

A couple professors at Emory University examine how well universities turn elite recruits into NBA or NFL Draft picks. Cal is one of two teams in the nation's top-ten for both leagues.

Share All sharing options for: Golden Nuggets: Cal Is Among the Nation's Best Schools at Turning Elite Recruits into NBA or NFL Draft Picks

Michael Lewis and Manish Tripathi, professors at Emory University's Goizueta Business School, have been doing some interesting work on how well schools turn elite recruits into draft picks. Cal rates among the best in the nation for football and basketball. First, let's look at their football rankings. 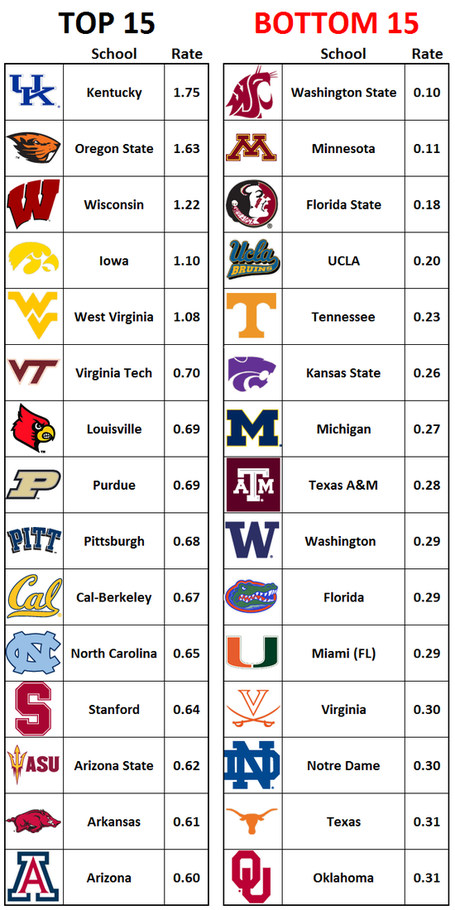 What do these numbers mean, though? Lewis and Tripathi explain.

As a follow-up to our previous post, we would like to provide a more complete view of the best and worst colleges based on converting elite recruits into NFL Draft picks (number of draft picks divided by the number of four and five star recruits). This study considers the last six NFL drafts, and examines the top sixty schools in terms of relevant recruiting cycles over the past twelve years. We exclude schools that have not produced a single draft pick in the 2007-2012 period or that have less than four elite recruits over the relevant recruiting cycles.

Since there have been a considerable number of inquiries, it should be noted that the University of Alabama finished in the middle of the pack. While the table above is produced from a rather straight-forward statistical analysis (descriptive statistics for each school), we would like to stress that our main results are derived from multiple linear regression models. The key result is the significant negative relationship between the number of four-star prospects and the draft conversion rate of high ranked prospect. It is also worth noting that while we focused on the ratio of draft picks to elite recruits we also conducted a number of other analyses that focused on alternative measures of draft success such as the number of Day 1 or First round picks per elite recruit. Our key finding was replicated across the various models.

Lewis and Tripathi also computed these rankings for basketball and Cal again finished near the top of the Pac-12. While they have only computed scores for a handful of conferences (ACC, Big 12, Big Ten, SEC, Pac-12), Cal currently sits at 6th in the nation and 3rd in the Pac-12.

Our series continues with an examination of recruiting classes from 2002-2011 in the PAC-12. The chart below lists our efficiency rankings for the PAC-12 (for more details on our methodology, please click here). The University of Washington was the clear leader in the PAC-12 in converting talent into NBA draft picks. The Huskies were followed by USC and Cal. Traditional power UCLA finished 5th. 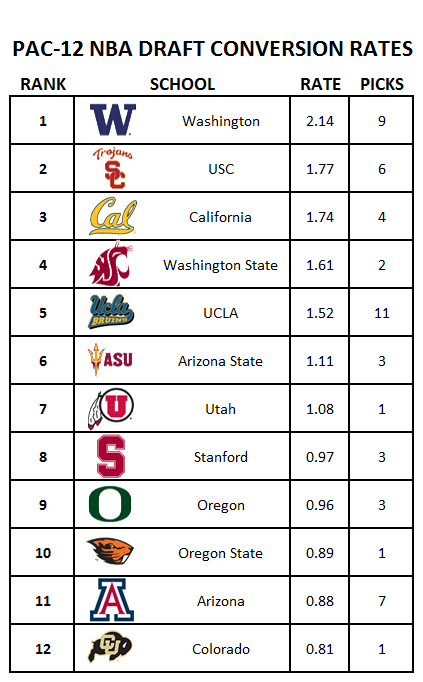 Cal and Purdue are the only two schools in the national top-10 in both categories.