What do you do if you're a tiny Asian guy with no chance of ever playing competitive football? Play video games, duh! With EA Sport's NCAA Football 14 (for the 2013 season, because that makes sense) coming out in early July, the top ten players for each FBS school was released. The CGB staff got together to play with our joysticks and analyze the list.

Share All sharing options for: The top ten players for 2013 Cal football according to EA Sports 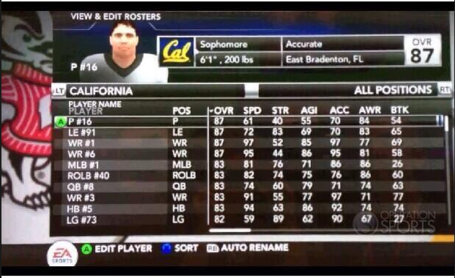 atomsareenough: I see Zach Kline seems to have won the starting job in the video game, at least.

Nam Le: I don't think Bigelow is going to like what they did to his speed.

atomsareenough: Oh, he's DEFINITELY not going to like that Treggs and Harper are faster than him.

...and wait, Cole Leininger is the best player on the team!?

Sam Fielder: Beat me to it!

norcalnick: "Top 10 Cal athletes who should be getting paid by EA sports for use of their likenesses!"

Leland Wong: I'm surprised we only have three defensive players, one of whom isn't even with the team right now. I'd expect Stefan McClure to get some recognition, but that's probably because he was injured last year. Mayhaps EA Sports is buying into the hype of our new offensive mastermind.

Sam Fielder: Bigelow only has a 74 for Break Tackle? I think tOSU would rate him higher than that...

JahvidKnowsBest: The EA-specified rankings are notoriously off. It's almost not worth playing with. People who really play this game a lot (like myself) will almost always download rosters online. Really good ones tend to come out a few days after the game is released. pretty sure they gave LaMichael James dreads last year, and Bigelow wasn't even put on the team.

Golden Bear faithful—Who do you have in your list of the top ten Cal players for 2013? Tell us in the comments section!