The 2012 Cal Athletics Financials: The Continuing Saga Of Institutional Support

Let's Take A Closer Look At The 2012 Cal Athletics Financials And See How Things Are Going!

Share All sharing options for: The 2012 Cal Athletics Financials: The Continuing Saga Of Institutional Support

Let's numbers! I know I'm not a financial wizard, but that's mostly because I flunked out of wizard college (Go Fighting Gandalfs!). I guess they meant it when they said their school motto was "YOU SHALL NOT PASS!" (I know, even I'm disturbed by that joke).

But Cal recently (ok, not so recently, but give me time on this), released its 2012 financials. These go from July to June, so these numbers are as of June, 2012, but I didn't see them until early 2013.You can see them here.

You can also see all of the financials going back to 2002 here.

I want to investigate the year over year information from 2002-2012 in a future post, but for this post, just want to delve into the 2012 numbers. They are the most recent numbers we have, so let's see what is going on.

Here, Cal's non-operating revenue is a flat 3 mil. I do not know exactly what non-operating activity would create a flat $3,000,000 in revenue. It says "Capital," so perhaps money made from renting out the property? I do not know. After you factor in non-operating revenues/expenses and look into how much Cal paid to paying back loans and servicing debts ($3,386,774), it comes out to -$411,700. That means that you have subtract that number from the $548,622 number above, which is how Cal ended up with the $136,922 of total profit. EXTRA PEPPERONI FOR ALL!

So, while that may seem great for Cal to make money, things are not quite as rosy when you dig a bit deeper. The first and foremost thing to note is two items in the Operating Revenues section Direct Institutional Support and Endowment Income (as spent). Direct Institutional Support is money received from the University. That is the crux of the issue surrounding the proposed cutting of baseball et al a few years back. The University is feeling a budget crunch due to severe cutbacks in Sacramento. Some professors are mad that any money is going to Athletics at all, although they are a lunatic fringe. Athletics becoming wholly self-sufficient would go a long way towards helping Cal itself deal with the budget crunch.

So, the University goes to Cal, the Athletics Department, and says "We want to give you as close to zero point zero zero dollars as humanly possible." Well, now, two years later, Cal gave $7,072,517, which is approximately $7,072,56.99 more than zero. Additionally, the listing for Endowment Income (as spent) states $5,884,820. I perceive this to mean money that Cal Athletics transferred from their endowment to their general account(s) to be spent on various expenses. So, while it is technically income, it is basically an expense. Money that Cal had that Cal no longer has. It just took the scenic route.

Some may disagree with me and say that the usage of endowment funds from the Athletics endowment for Athletics purpose is wholly reasonable. This viewpoint makes some sense in a general sense. The purpose of the Endowment is to be there to help supplement income and pay for costs.

However, it is unclear to me whether the money transferred was income or principal. Institutions are only supposed to spend the income they make off of their endowment. Usually, if they are spending principal is equals bad bad bad bad bad bad bad. I wouldn't be surprised if it was principal and hope dearly that it isn't.

The second aspect is that I split the operating income into outside income and inside income. Outside income is ticket sales, NCAA distributions, etc etc; it is money that Cal is making. It is true that the Endowment contains sources of outside income (donations etc), but the more Endowment you are using, the less outside revenue you are making. So, even if it is appropriate to use the Endowment in certain circumstances, it doesn't mean it's great that Cal is using the endowment, because it means that they aren't making enough revenue to cover expenses. I'm 100% certain that other schools use endowments to make up shortfalls, but other schools aren't quite facing some of the budgetary challenges that Cal is.

So, that means that although Cal made $136,922 in FY2012, it is solely because they received approximately $13 million from either the University, or their endowment to supplement their actual operating income. There is a caveat to this. The Operating Expenditures section does notes Transfers To Institution and lists $2,468,121. I don't know why Cal, the Athletics Department, is transferring money back to the Universityl, but hey, why not! So, let's take that money off the top and now the amount in supplemental revenue is only $10,588,216. So, instead of $13 mil, it's $10.5 mil. While slightly better, that means that basically Cal Athletics lost approximately $10.5 million last year, instead of making the $120,000.00 it states it made.

CANCEL ALL THE PIZZA PARTIES! ALL OF THEM!

If you break the numbers down further, certain truths become self-evident. A few more thoughts on things that popped out at me.

1. PROFITABLE PRODUCTS. Only football and basketball made money last year, approx $7 mil and $1.6 mil respectively. That is the problem with running an Athletics Department. You only have 2 profitable products and 25 loss leaders, many of which lose a significant sum of money (I intend to cover that, along with the TitleIX implications, in a future post). It is difficult for the University to say to Cal, the Athletic Department, "We want a well-rounded athletics department, but also we won't give you any money for it."

UCLA actually had roughly the same amount of coaches' salaries and administration salaries, although oddly their revenue and expenses matched down to the penny, which seems wildly unlikely.Also, to compare UC school's, UCLA University, gave apparently $60,000.00 in Direct Institutional Support compared to Cal's $7 mil. Quite the differential there.

If I am reading Oregon's financial report correctly, their coaching staff's salaries are approximately $4 mil more than their administration salaries. Side Note: Oregon claims to have lost $6 mil last year (YEAH, RIGHT, HAHAHAH), but that is after you account for -$11 mil in "Depreciation Expense." I don't have to be a financial genius to see Oregon trying to push their numbers downward with Depreciation Expense. They made $23 mil in ticket sales and had $32 mil in contributions (i.e. donations). I wonder if most of those donations come from one man? WHO COULD THAT SINGLE MAN BE?!?!? IS HIS NAME BILL KNIGHT? OR PHIL FLIGHT? IT COULD BE ANYBODY!

Thanks to valued reader BandAlum, we can look a bit deeper at the fiscal year 2012 revenues and expenses. First, let's look at the revenues. Note you should be able to make this larger by opening it in a new tab. 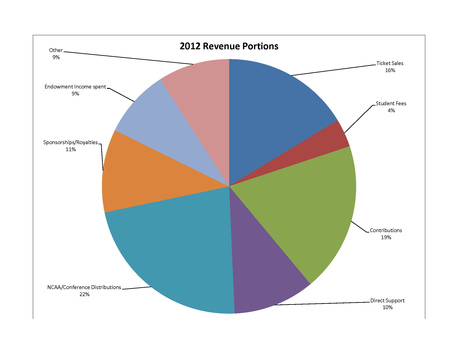 The first thing that jumps out here is that 19% stems from Endowment or Direct Support, as discussed above. So, approximately 1/5th of our revenue is not "outside" revenue. It's money taken from another Cal source to make up a shortfall. That's not great.

Secondly, ticket sales are not the #1 or even the #2 revenue source. They are actually #3 at 16% of total revenue. Contributions are #2 at 19% and NCAA/Pac-12 distributions are #1 at 22%. I think that the NCAA/Pac-12 distributions number ($15,278,708) should hopefully go up in the future. I am also hopeful that after a strong campaign and focus on donation, the Contributions will increase. Additionally, the fiscal year 2012 is a bit of a weird year to look at ticket sales. Obviously, football ticket sales are the engine for growth. Fiscal year 2012 is from July 2011 to June 2012. That includes the 2011 football season, which was held in AT+T Park, while Cal was upgrading Memorial Stadium. Not only is that stadium significantly smaller than Memorial, but Cal held only 5 games there. One game was held at Candlestick. 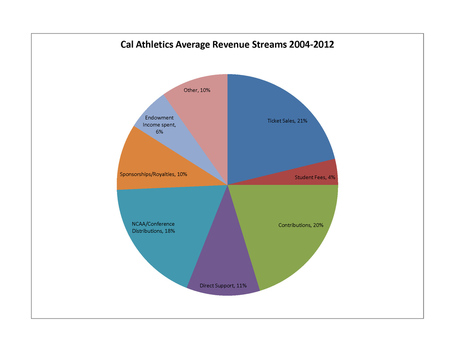 In there, ticket sales were on average 21% of revenue as compared to the 16% in 2012. So, hopefully, that is just a one year downturn due to extenuating circumstances. 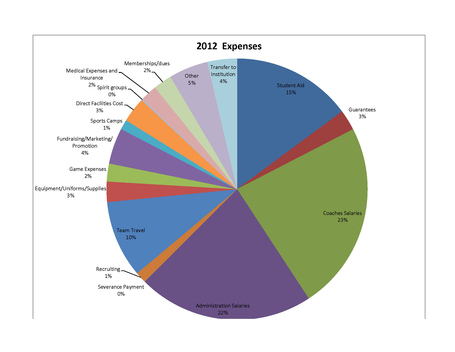 They are somewhat different from the revenue section in the sense that there are two main expenses and then a lot of everything else. Revenue seems to have a handful of moderately large chunks, while expenses has a lot of nickle and diming (in a macro sense). There are 13 separate categories that constitute 4% or less of the expenses. There are basically two main costs: coaches salaries and administrative salaries (which we discussed above in relationship to revenue). In relationship to expenses, the salaries are about 45% of the expenses. So, almost half of all of our expenses stem from one category (or two categories if you wanna look at it the way Cal does). Perhaps one way to make Cal more profitable might be to lower administrative salaries (via lay offs etc etc)? I'm sure Cal looked at that possibility already and probably took action. The reality is that sometimes it is hard to grow if you shrink your staff.

The numbers look fairly rosy for Cal, but if you dig a bit deeper, it seems more dire. The University gives as much money as ever to the Athletics Department, despite previous protestations that they wanted to stop. Cal Athletics basically lost millions of dollars in 2012. What is the end game here? Cal tried to make itself more profitable two years ago by cutting several sports and people flipped out. They helped save things in the short to medium term, but what about the long term? Starting in the 2030s, the debt costs for new Memorial will start to rise. It is doubtful that operating expensese are going to go down over time.

So, the only real way to resolve this problem is to increase revenues substantially. Increased NCAA/Pac-12 Distributions shall hopefully assist with that. Contributions and Ticket Sales are the two biggest components of Cal's revenues, so that needs to go north. Ticket sales in 2012 were down, partially due to the special one year only instance of AT+T Park. Football success is the engine for growth going forward.