Cal professors provide their own report on the financing for the Cal stadium upgrade. Let's dig in!

Previously, I wrote a post regarding Cal's update on financing for the Memorial Stadium Upgrade. That was based on an analysis provided by Cal itself. Recently, a report was issued entitled "Evaluation Of Financing For U.C. Berkeley's California Memorial Stadium and Simpson Center For Student-Athlete High Performance." It was drafted by three Haas School Of Business professors, William Fuchs, Richard Stanton, and Nancy Wallace. The Vice Chancellor for Administration and Finance, John Wilton, specifically requested they provide an objective analysis of the ESP Program etc etc. The PDF with their report is 118 pages long (although the report itself is about 34 pages, there is a lengthy appendix with many exhibits).

It appears that they reviewed a lot of documents from Cal and even interviewed key players (such as Sandy Barbour and other administrators). I read through this report, so you do not have to. It echoes many of the thoughts that we saw in the previous post about Cal's financing plan for the Memorial Stadium Upgrade. Initial projections for funding were absurdly rosy. Cal faces a massive problem in 20-ish years if recent changes don't provide improvement. But in the end, it is actually fairly optimistic about the future of the financing here. Let's dive in!

First, the report provides a background to the building of Memorial Stadium. It notes that seismic problems inherent in the location. It talks about how plans to update the stadium were delayed due to litigation (and the tree sitters) and this created a complex problem that increased the costs. They note that the combined debt to seismically upgrade the stadium and provide the other upgrades (such as the Simpson Center) will cost approximately $445 million.

They note that from 2013-2031, the annual payments (for interest only) are 18.1 million. Then, as Cal starts paying principal back in 2032, the payments jump up to $26-37 million until 2050. In 2053, there appears to be a massive balloon payment of $81.9 million, which is a staggeringly large number. However, the bonds don't technically have to be paid off until 2112, so it looks like Cal has set up a very aggressive payment schedule for itself here. This gives Cal a fairly large margin of error. However, this is a massive amount of debt, so you can't be too conservative about paying this off smartly and quickly. Then, they look at the 6 sources of obtaining money to pay off the debt. These sources are:

Revenue from ESP seat sales (i.e. long-term 40-50 year contracts for football seats) is the larger source of incomes. The report notes that if every ESP seat were sold, the total raised would be $311 million, which is well short of the over $400 million in debt. So, the other 5 sources are still important and relevant. Another aspect that is relevant is how much return Cal can get investing the money it makes from the ESP sales. We'll get into that in the next section.

The report notes that initial statements on ESP seat sales were misleading and inflated. Cal stated they sold 1,854 seats by June 30, 2010. It appears that they used a vaguer definition of "sold," that included seats that weren't quite 100% sold. Under a more concrete definition of "sold," by June 30, 2012, Cal stated they sold 1,745 seats. It is true that seats can become unsold if the buyer decides to no longer continue paying for the long-term ESP seat. However, the decrease in seat sales is based on the change in definitions and what it means is that sales have not been as robust as we had previously been led to believe. Not good. But don't worry, we have decades to get this right and Cal is already aware of the need to change.

The report notes that they tried to dig into the assumptions underlying the initial forecasts, but many of the people who set them up had moved on from Cal. So, they couldn't figure out the rationale. They note by June 2012, seat sales were at 60% of the originally forecasted levels. Total dollar sales at that time were half of what they were forecasted. Cal got sold a bill of goods by some nameless "forecasters." Who are these people?!?!?

As I outlined in my prior post, Cal has made a series of changes to its ESP sales program that should hopefully have all seats sold by 2021. Although that is a delay from earlier forecasts, hopefully it'll be accomplishable and allow Cal to meet all of its debt payments by 2053. Per the report if Cal can meet 54% or more of its currently forecasted level of seat sales, then it should be good to go by 2053. That requires the sale of 389 seats for $43 million. So, that is the goal! The report provides a series of graphs outlining futures depending on whether Cal sells 40%, 60%, 80%, or 100% of the seats. Here they are. You can make them larger by opening them in a new tab. 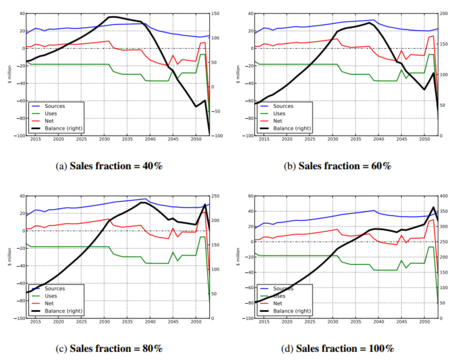 While the seat sales can provide a significant sum of money, Cal can make even more money. How? By having their money do all the work! Invest the money you make off of the ESP seat sales to make more money! So simple a caveman could do it!

The report talks generally about investing and how Cal invests etc etc. They believe that Cal can average about 6% on its investments based on historical factors etc etc. However, for Cal to remain positive heading into 2053, all they need to do is make 4.1% on their investments, which is the average rate for Cal's borrowing.

Of course, these are sliding factors. The more seats you sell, the less return you need. The fewer seats you sell, the harder you need that money to work for you. This is where the models come into play. The report provides different models that show the various levels to ensure Cal is good to go by 2053. Thanks to Berkelium97 for help with formatting.

For various realized proportions of the ESP sales forecasts in 2013–2021 shown in Table 3, this

the FFE balance in 2053 to remain positive.

So, here, if Cal sells 10% of its remaining ESP seats, they'd have to get nearly 8% return to break even by 2053. Conversely, if they sell 90%, they only need 4.46% return. Since Cal believes they can sell 100%, they'd only need 4.06%, below their standard average return. Now let's flip things around and look at how many seats Cal must sell based on a range of investment returns.

For various realized returns on the FFE, this table shows the proportion of the ESP sales forecasts

The report notes that in a worst case scenario (i.e. no more seat sales and only 2% return), Cal actually doesn't run out of money until 2034. So, even in the worst case scenario, we have 20 years of "WE HAVEN'T SOLD A SINGLE SEAT SINCE 2012 AND THE ECONOMY HAS BEEN IN SHAMBLES FOR DECADES" to try to figure something else out. Given that we've sold ESP seats since 2012, I think we're doing OK.

Finally, on page 213 of the report (PDF page 27), they provide more charts. The first chart shows how much money would be in the fund in 2053 based on ESP seat sales and investment returns. Under the report's belief that Cal can sell all of the seats and get 6% return, Cal would have $319 million by 2053. A best case scenario of all seats sold at 10% return on investment nets Cal $2.5 billion!

Cal has taken out over $400 million in debt to finance a new stadium. It doesn't have to pay off the debt until 2112, but has plans to pay it off by 2053. To do so, it created a special kind of long term seat plan for the most expensive seats. These seats cost thousands a year, but could raise millions in income if they are all sold and the proceeds are invested wisely. Initial attempts to do that have fared somewhat poorly and Cal did itself a disservice by essentially misleading the public about how well things were.

However, after a more reasonable course correction, things appear to be back on track. If Cal can sell at least 54% of remaining ESP seats and get about 6% of return on investing those proceeds, they should be fine. Sell all those seats and get a decent return and Cal could make itself a decent chunk of change!

I believe that Cal can sell all the seats and am hopeful they can get a reasonable return. Even if things go poorly, they have decades to keep tinkering. It was essentially decisions made in the 60s, 70s, 80s, and 90s that got us to this point and it is decisions made in the early 2000s that will affect how Cal Athletics looks decades from now. Good luck, Sandy Barbour!

The report continues on to discuss a few other factors, including most importantly rental proceeds. This post has already gotten fairly lengthy, so I'll discuss that in a future post. Thanks and feel free to provide your thoughts on this in the comments. GO BEARS!