Nope, the Bears' post season berth has long been secured. Nevertheless, this team desperately need to end the long losing streak (mostly with Senior ace Jolene Henderson out of action) that has seen the team winless in nearly 3 weeks.

Despite the very tough result in 9 inning on Friday night, this was by far the most competitive Cal Softball game since the 1-0 loss when Jolene Henderson got hurt. Bears held Jolene back to start the game and found themselves down 7-3. Originally only supposed to throw just 35 pitches or so, Jolene's solid outing probably caused the Bears to draw a whole bunch of walks and tie things up at 7. Bears did miss out on going ahead there. Jo stayed in for an extra inning and saw Victoria Jones hit her second homer of the game to put the Bears up 8-7 in the top of the 7th. With Jo to close out the game and snap the losing streak, the Bears quickly came within just one out of accomplishing it. Sadly, a bad throw that pulled the Cal first basewomen allowed the tying run to reach. A couple hits later, we are heading to extra innings. Freshman Vanessa Alvarez actually survived the 8th inning but gave up a game winner in the 9th as the Bears could not muster any offense again.

Regardless of the result, the Bears did fight back from a 4 run deficit and made the game competitive, which is very very encouraging after the beating that the team took in the last two weeks. Jolene looked great in her time in the circle but the Bears' D was inconsistent again (making two costly errors). It surely would be nice to have a W heading into the postseason.

I am still holding out hope that we would look back at this season and see the time that Jolene had to sit out as a blessing as her arm may be fresher. 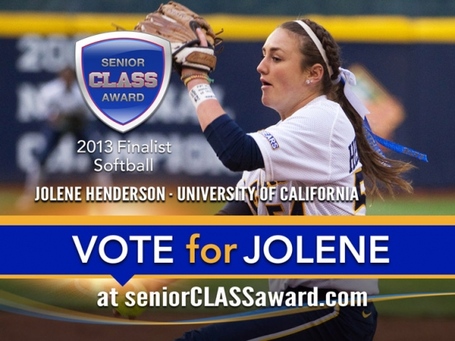 One final reminder, don't forget to vote for Jolene for the Senior CLASS Award! You can vote by clicking here. Have you voted yet today?