The exciting conclusion of the Cal Rugby match against Notre Dame in the Varsity Cup Quarterfinal. Did the Bears hold on to the 29-0 half time lead?

Cal held a 29-0 lead heading into the second half. Part I of the photo essay covering the first half can be found here.

A quick recap, after filling myself with fresh pretzel and chocolate covered bacon at the nearby Amish Market before the game, I proceeded to take advantage of my media pass (Cal Rugby actually considered CGB to be a legit media source?) by taking a whole bunch of pictures (to make up for my mediocre rugby knowledge).

During half time, I went back to the stands to mingle with the Cal fans. While the people that I know wanted their pictures in this photo essay Oskified (and I'm way too lazy to do that), these Cal fans basically demanded that I take a picture of them. 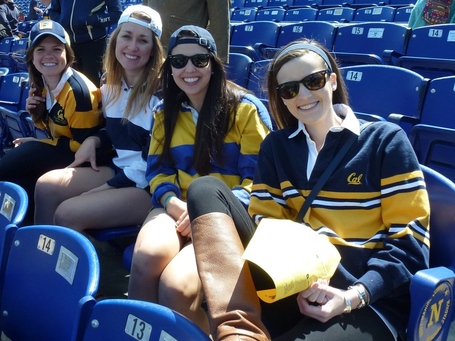 So here is a picture for a break in rugby action. 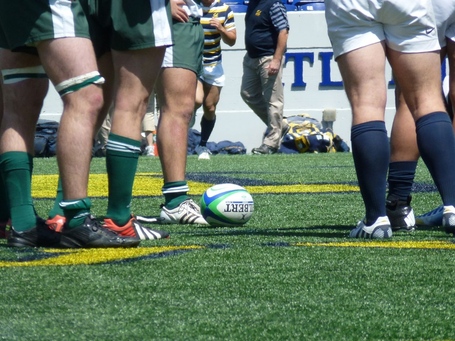 Half time is over. It is time to get my eye back on the ball. 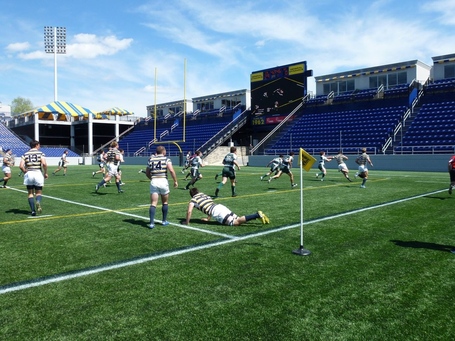 The second half started with a quick Cal score. 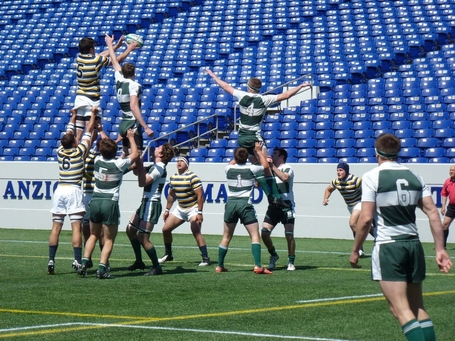 Another interesting view of a lineout, as the Bears were close to another score.

All the fans were sitting on just one side of the stadium, so there is always empty seats in one vantage point. 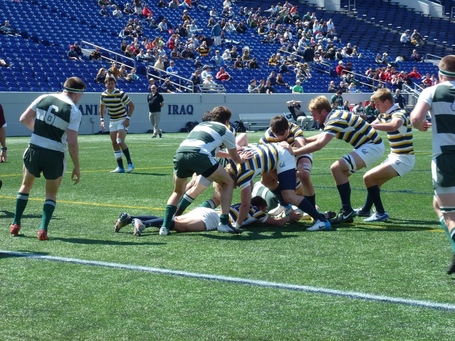 From this side, you can see some of the Cal fans in this rather large stadium. The Bears were on the verge of getting another try. 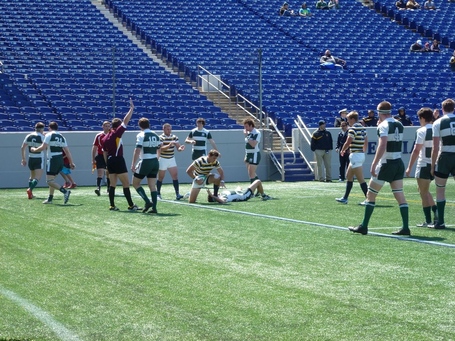 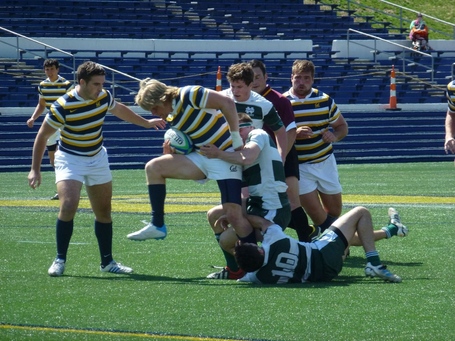 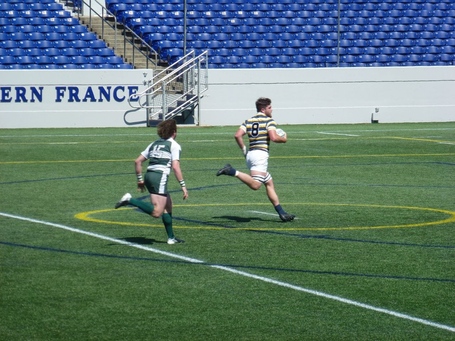 and yet another, though it doesn't really get old. 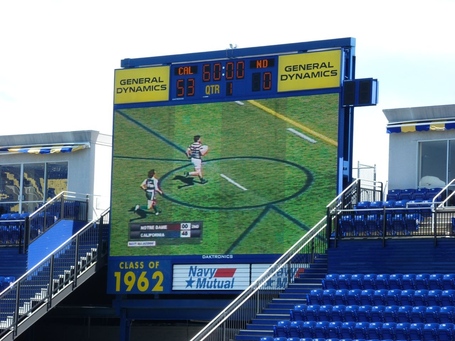 Like I mentioned in Part I, given a media pass to stand right by the field, I was really close to all of the action. There was one moment, however, when I sort of feared for my safety. Standing at the Cal endzone for the second half to take good pictures of tries, I saw the ball being kicked right toward me. 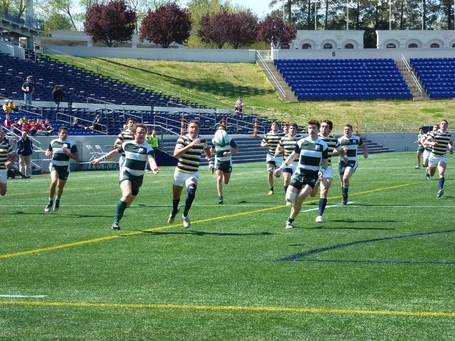 And it's a mad dash for the ball, with everyone coming toward me with full effort and no place to back up for me. 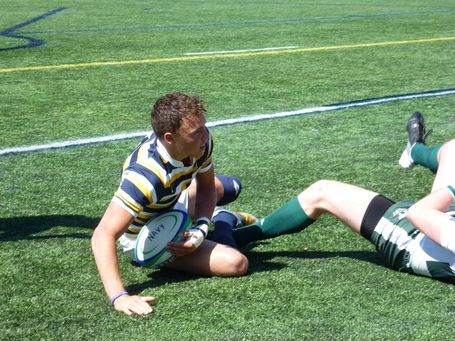 Cal got to the ball first for another try.

And fortunately for me, no one over ran the field. What I learned from this experience is that apparently I don't have the balls to be a Cal dance team members who sit underneath the basket in basketball games. 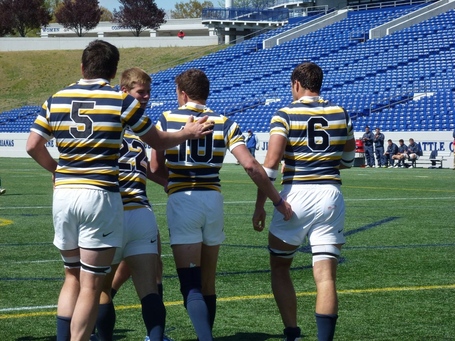 Number 10 Harry Adolphus is congratulated by his teammates. 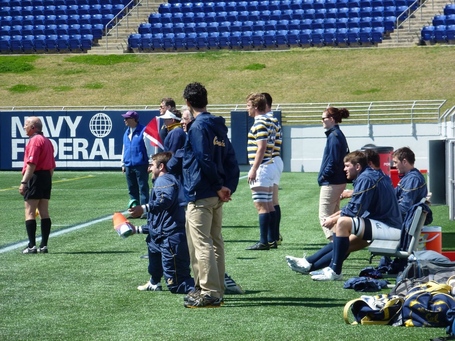 Here is a look at the Cal bench, as the Bears start to make some substitutions. 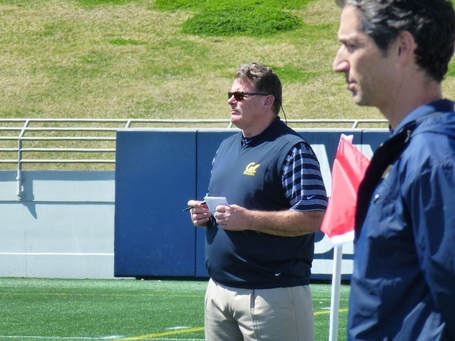 Ever the perfectionist, Coach Jack Clark is still getting on his players for mistakes despite the large lead. Never pass up a teachable moments. 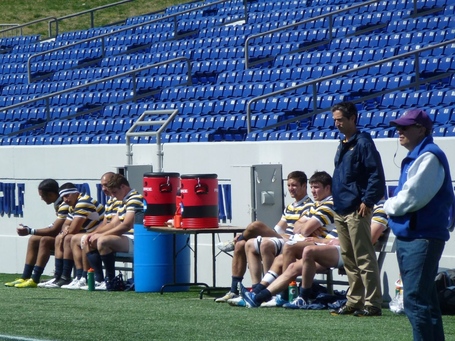 Bears were able to rest the injured senior star, Seamus Davis (first visible guy from the right) in this one. 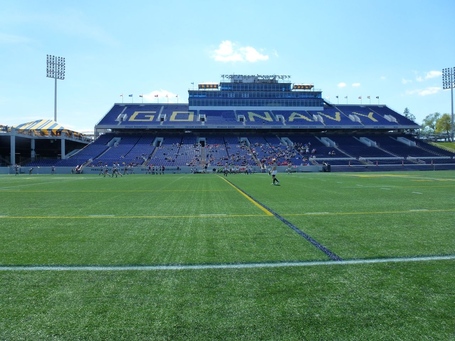 Here is a look at the field from the Cal bench. The Navy Marine Corps Stadium is designed to resemble a battleship from this view.

The Bears tacked on a few more scores. 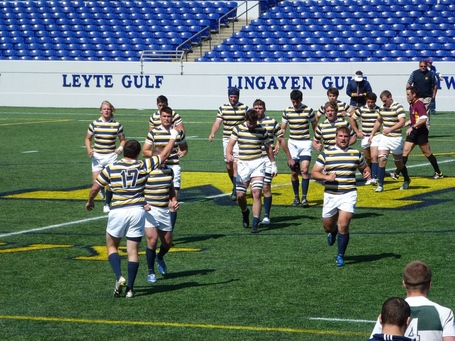 And the match is over! 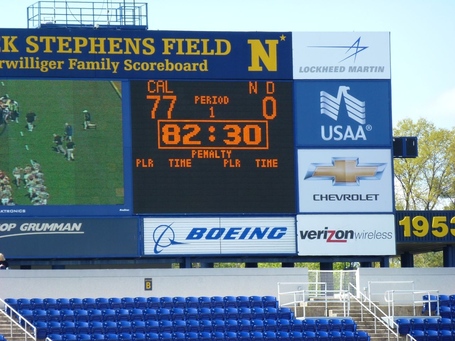 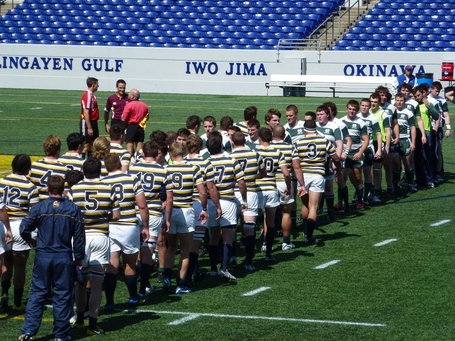 The two squads exchanged handshakes after the game... 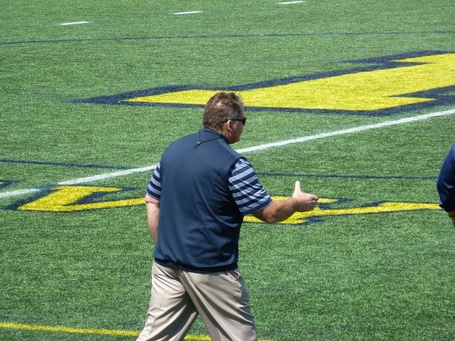 "Notre Dame is one of the improving teams in U.S. collegiate rugby and they're growing the program in the right way," coach Jack Clark said. "It was a difficult match for them today but their coaching leadership and team ethos are outstanding."

This was a fun day given the nice weather and the easy Cal victory. For the most part, Cal teams have not done all that well when they come out East to play (lacrosse has had some wins and volleyball dominated an year ago, but men's soccer and field hockey hasn't been able to solve Maryland and there was that one football game). For those in the East Coast, Cal Rugby will return East in about a month+ to again play in the CRC 7 Championship in Philadelphia.

I did not stay for the second game, where Navy defeated Dartmouth to win a trip to Berkeley this coming weekend. For those in the Bay Area, I hope this photo essay partially inspire you to go check out the final home match for the Bears (the Varsity Cup final will take place in Provo, Utah). For those like me that is not in the area, fortunately Pac-12 Digital have decided to stream the match for free.

The Varsity Cup National Championships Semifinal between No. 1 nationally ranked California and Navy will be webcast live at 2 p.m. PT Saturday, April 27, on Pac-12.com. To watch the event live and for free, go to http://pac-12.com/live/calbears.aspx.

The Bears are now just two wins away from National Championship #27!