The Sonny Dykes era kicked off this spring to a host of injuries. At running back, offensive line, and virtually every other position, players were pressed into service as nominal starters dealt with surgeries and injuries. Some players seized their opportunity, moving up the depth chart released. Today, the CGB writers weigh in:

Berkelium97: We're a long way from the days when our starters on the O-line averaged about 285lbs. We're stacked with big'uns this year. The starters average about 320lbs and the two-deep average is about 314. Toss in the 240lb Gingold playing the Big Bear role and we have the potential to do some serious damage with our power running game, especially in the end zone. These guys have all the physical tools to perform well; now it's up to the coaches.

On the other side of the line of scrimmage, our D-line is surprisingly svelte. The two-deep average weight is only 272lbs and we only have two 300+ pounders. They will have their hands full against lumbering, earth-paving power teams like the Lobsterbacks. However, the defense managed to shut down the running game throughout spring practice (although that does not bode well for the O-line), so size isn't everything.

Avinash Kunnath: Are there any surprises or concerns you see among the starters?

solarise: I expect Richard Rodgers to start over Jackson Bouza to eventually start once he recovers. Speed plus size is hard to beat.

Chris Adcock is nowhere to be found on the spring two-deep. What's the story there? Given the snap issues we could use another able body @ Center.

blueandgold15: I'm not sure it matters entirely who they call the starter at any of the receiver positions - having such diversity in size, speed and body type puts us in better position to find an exploitable matchup. When teams match up with us in a nickel or dime package and have a 5'10, 5'11" cornerback in the slot, I'm pretty sure you'd rather have Rodgers out there. When they operate out of a base 3-4 or 4-3, you'd probably want Bouza instead.

Another area of concern has already been discussed to death by fans, but won't resolve itself until after the freshmen arrive for fall camp - the depth in the secondary is extremely worrisome. It wouldn't be a surprise to anyone if at the Cheek-Allensworth-Walker trio break in, given the play of Lapite and Lee thus far. 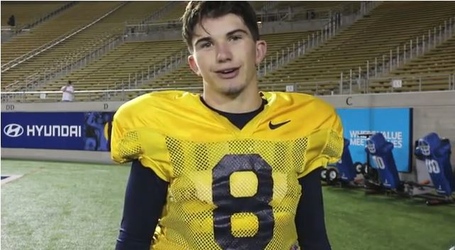 Zach Kline: The return of Aaron Rodgers? He has the right number, at least.

Ohio Bear: It is very difficult for me to get excited about the spring two-deep, especially since there is no definitive starter at QB. The real proof will be in the summer when the REAL training camp gets going.

That said, there are certain givens that I would expect, such as Bigelow as first-string RB and Harper as first-stringer even though they were held out of spring practice. I find it a little interesting Harper is listed as a starter at the H position instead of a Y or Z. I can't wait to see how Harper is utilized at that spot. I am excited that Cochran won the starting center job as a redshirt freshman; perhaps this is a sign he will follow in the footsteps of Alex Mack and Marvin Philip as great Cal centers. Just shore up those shotgun snaps, young man.

On defense, I'm not surprised to see Scarlett, Forbes, and McCain as the presumptive starters despite missing spring practice. We saw enough from those guys last year to know that they are starter material. I look forward to seeing DC Andy Buh work with a full deck with these guys and see what this defense can do. Just a hunch, but I think we will put pressure on the QB this year. Alex Logan as the starter over Mike Lowe at safety is a mild surprise to me, as I kind of expected Lowe to get that nod.

norcalnick: I think what is most noticable is the youth across the board on offense. It's entirely possible that eight or nine starters come next fall will be underclassmen, and there are only four seniors on the entire offensive two-deep.

Does that mean anything? Perhaps not. A true sophomore is going to have exactly as much experience running Sonny Dykes' offense as a redshirt senior, so experience might not be nearly as valuable as it would be in other situations. Certainly, many have complained over the last few years that the most talented players didn't necessarily see the bulk of the playing time. On the surface, it very much appears that the cream will rise to the top. The question is if that approach will pay immediate dividends.

Avinash Kunnath: Based on what you see on our two-deep, how would you compare our talent to the rest of the conference?

Kodiak: It's hard for me to get too excited by spring two-deeps. On defense, for all the fuss over us switching from a 3-4 to a 4-3, we basically shifted last year's OLBs to DE...and we're playing the same personnel outside under a different name. The one thing that catches my eye is Logan penciled in at safety. Sweet mother of Oski, we have no depth at safety.

On offense, we're missing several key skill players. The biggest position battle will likely be at right guard. As others have noted, the only thing that caught my eye was big Matt Cochran leading at center.TheScientist019: While it's true that we've just moved our OLBs to DEs like you said Kod, there's still a big question mark regarding how the players will actually take to the adjustment. In particular (and watch me bring this back to the depth chart specifically), I wonder about Chris McCain. He impressed everyone with his never-give-up play and defensive leadership at LB, but I'm a little surprised he's already penciled in as our starting rush end considering he didn't get any practice this spring and he's still listed at a (relatively) mere 215 lbs. It remains to be seen how he will stack up head-to-head against some of the O-line bruisers at Stanfurd--will he still be a defensive standout or was his success related to the blitzes we sent him on as an LB?

Hey, did we make it through on entire depth-chart round table without fretting over the ORs at quarterback?