The CGB Writers weigh in on the #UnifyTheBears phenomenom!

Share All sharing options for: #UnifyTheBears: A CGB Roundtable

#UnifyTheBears: A hyped build-up to an unveiling event on April 10, 2013 up at the Field Club of California Memorial Stadium. Now that we've seen how our Golden Bears are going to look, what do you think?

(My own thoughts) Vincent S: Overall, I like it. It's not garrishly jarring. It's an update that doesn't try to do too incredibly much.

What I don't like:
- I'm not a fan of the California font - I would've liked to see the one on the current basketball uniforms imported over, or script-ifornia everywhere.
- Having California go straight across the basketball uniform also looks a little awkward, after the years of seeing it at a slight arch.
- The streaks through the collar don't seem to flow as well with the uniform - the collar with a script Cal dead-center is great, but the streaks kind of break that up. Also, on the Gold uniform, the dark blue of the sleeves are harder to distinguish, and the gold looks very angled.
- One version of the new bear looks like it's crying.
- No gloves? What's up with that?

What I like:
- The subtle bear logo in the numbers of the football uniform. I think a subtle script Cal might have worked well as well.
- The shoulder location of the updated bear - I have a feeling the bear was updated with this location in mind. The black is also good - in gold, the sleeves would look very busy from many angles.
- Script Cal + no helmet stripe on the helmets
- On the gray uniform: the Gold outlines really pop

And most importantly, I like that we're finally unifying the look across all sports. I believe that across all of our sports, we should have an instantly recognizable, strong look. The individual uniform details, to me, are less important. Uniformity (no pun intended) is the key here, and I think we're taking a step towards achieving that.

Unclesam22: They didn't blow me away, but they could have been MUCH worse. I'm not crazy about the grey but it isn't hideous. I'm really on board with the consistency and branding initiative that this is kicking off. My one quibble is the Block C not figuring prominently and being taken off the baseball cap. But other than that, I think that everything I saw looked pretty good and will serve Cal well. 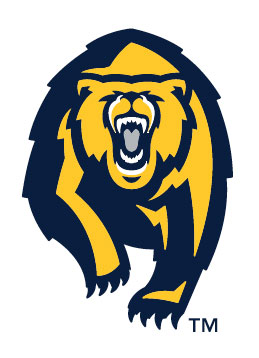 The "new" Cal Bear. via grfx.cstv.com

atomsareenough: I'm not super enthused or anything, but I'm modestly positive about them. I think they're a marginal improvement over the previous set. Let's go over the good, the meh, and the bad.

Good
* I like that they're a little simpler and cleaner looking, without too many extraneous markings or anything. I wasn't a big fan of the random claw markings on the pants and collar of the previous uniform.
*Matte helmets. Hell yeah! Also no more white helmets.
*Subtly placing the new Bear logo in the background of the numerals on the football jersey is a nice touch.
*The font is pretty decent. I like the new C, at least on its own. I believe CGB reader Monica's Dad pointed out that the distinctive top right and bottom left corners on the C and the O make it look a little different than the other letters in "CALIFORNIA". Overall though, I still like it on balance. It's a little retro and yet still pretty modern. I like the numerals quite a bit as well.

Meh
*New Bear logo. The full-color blue and gold version is fine. Not amazing but I can live with it. This all-gold version is kind of awful though. I'm surprised that's what they chose to unveil first.
*Gray jerseys. I think they'll look okay with blue pants on the road, but it wasn't really necessary.
*Script Cal. Based on the rumors, I was looking forward to a Walking Bear or a Bear Paw logo with a uniform number on the helmet. Kind of a letdown. But then you know me, I've never really liked the script Cal logo that much. We should go back to Block C, dammit!

Bad
*The black Bear logo on the shoulder patch. Honestly, what is the point of that? At least we won't be able to notice it most of the time, but it seems completely inexplicable.
*The weird stripes cutting through the collar. Again, why? Is it supposed to make the players look like they're wearing a cape, or a bib, or what?
*Monochrome sets. I don't like them. I'm hoping that this was just done to show off each color distinctly, but I want to see pretty much only mix-and-match combos.

LEastCoastBears: It is not some drastic change that alienates the fanbase, so I am fine with the new uniforms. I am also not sure it is enough of a change to get anyone really excited about them (look at the faces of the student athletes who modelled those uniforms at the press conference). Apparently the sharper outline of the new bear logo makes it edgier than the old one.

Even though I was underwhelmed by the actual unveiling, I do appreciate that Cal Athletics got the famous alumni involved in making those teasers. 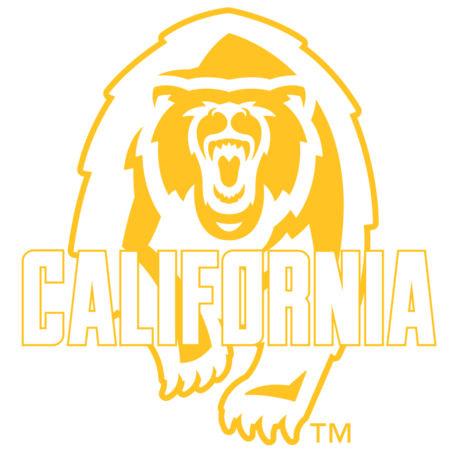 TheScientist019: The football uniforms are a nice design; it seems like they have broad appeal to appease a large number of the Cal fanbase, which was torn over tradition vs. new style. I'm not crazy about the idea of introducing grey, but it seems light enough on the football uniforms that I won't notice. The stripes down the collar are a little funny and I think it'd look better without them, but hardly anything I'd complain about. My biggest disappointment was the announcement on the Cal Football Equipment Twitter that we're drastically reducing on the number of combinations we'll be wearing at home.

@daviderod Then you will love the idea of us wearing navy jersey and gold pants as our default home uniform. Default=every home game

I am a little underwhelmed by the attempt at unified branding. Reintroducing/modernizing an old logo doesn't seem like the most effective means to establish a singular identity. (Plus, I'm just a fan of the "walking bear" logo.) Also, given that football and basketball are the two programs that grab the most attention, it's a little strange that the most prominent logo on the football uniforms is the script Cal while that of the basketball unis is the all-caps California. I expected this unified identity to result in more matching between the two.

Berkelium97: Like atoms, I'll break my reactions into categories. Although most of my comments are on the negatives, I am pleased with the new uniforms. They're not perfect, but they're certainly an improvement over the last uniforms.

*It's a clean, classic look, which is exactly what I was hoping we would see. This is a great improvement over the rather bland 2008-12 uniforms.

*I am very glad we're keeping the Cal script on the helmet. I was afraid we would add some sort of bear logo which would not mesh well with the clean look (think the Oski face logo or that odd bear/claw logo). The walking bear logo would have been okay. A block C would be good. The Cal script is great.

*The subtle blend of the new bear logo into the numbers is a fantastic touch.

*Matte. I hate matte helmets. They look exceptionally dull in sunlight and are only marginally better during night games. Do they plan on painting those helmets after every game? I ask because they have a remarkable ability to highlight even the slightest bit of wear and tear. I can't imagine how beat-up those things will look after a couple games.

*I'm not sold on the bear logo on the sleeves. Why is it black? Why not a very dark blue? It's tough to get a better impression without seeing it in motion or in sunlight, but it looks rather busy given the simplistic overall look.

*I'm not a big fan of the spaghetti strap look. I understand why they are there--otherwise the collar would be much too thick. But why not trim down the collar thickness by half an inch or so? At least it's better than Oregon State's sports bra look a few years back.

*Gray? Gray? Since when is gray one of our colors? It's an old, dingy-looking gray too--like someone accidentally tossed a black hat in when we washed the white uniforms. They might look okay during night road games, but that color is not great under bright sunlight.

*No more block C for the baseball team? That borders on blasphemy.

Why is the Bear logo shaped like a Christmas tree?

norcalnick: On CGB's front page poll, 92% of responders said they either like or are ambivalent about the new designs. And the athletes seem to like 'em. Sounds like mission accomplished to me.

TwistNHook: Somebody get me George W. Bush and an aircraft carrier stat!!!

solarise: I'm fine with the design as long as we WIN ANYWHERE!!!

Ohio Bear: I like them. The new design is an improvement over the old one and the one before that. (I never really warmed up to the uniforms we wore from 2008 to 2012.) I really like the fact that we got rid of the helmet stripe and that we appear to have enlarged the Cal logo on the helmet. I also like the matte finish on the helmets: I always thought that would look sharp if we incorporated it and I wasn't disappointed. And even though I would have been okay with a return of the Bear claw or even a Block C on the helmet, I am glad we retained the script Cal.

I don't particularly care for the idea of the gray uniform, but I can live with it. It doesn't do violence to the Cal traditional colors. Gray is kind of a neutral for me, sort of like a white uniform. My favorite uniform combination so far is the gold jersey/blue pants. THAT was the combo most improved by the new design and it has to do, I think, with the use of blue sleeves. That design and combo looks sharp. I can't wait to see what a blue jersey/gold pants combo looks like, too.

The secondary mark -- the ferocious Bear logo -- has been the subject of some debate among us. I like it. It has some roots from an old logo from the 1980s, except that it's tweaked to make the Bear more fierce. To me, this logo embodies the concept of respecting the past and looking to the future. Apart from that, though, I just like it. I think it looks cool.

So there you have it. From the length of responses, the new uniforms clearly inspire within us a passion that even the Rose Bowl clearly could not match. What do you think? Do you feel like killing it with fire, love at first sight, or have they grown on you?