The electrifying and amazing running back Jahvid Best takes on Cal superfan and sports writer Mike Silver in this first round match-up from the Pete Newell Region. Who gets your vote and who do you see moving on?

Here are some thoughts from the CGB Remembering the Seniors post: 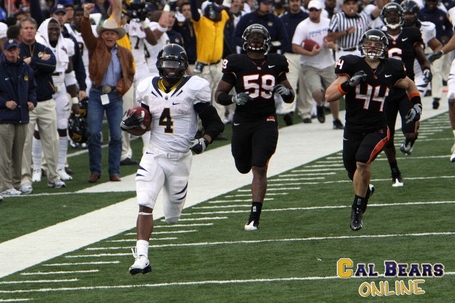 Besides being an acclaimed journalist for Sports Illustrated and Yahoo, everything you need to know about Mike Silver is summed up in this interview:

Which school should we reserve our primary hatred for, USC, the Furd or UCLA?

"That's a very tough question that I wrestle with often. First of all, UCLA isn't even in the conversation. They're like your little brother who has a slumber party at your house, and you get kicked out of your bed, and then one of his friends wets your bed, and he knows but doesn't tell you and you figure it out when you get into bed the next night. And then the next day he beats you in Air Hockey for the first time in his life, and he parades around the house screaming about how awesome he is and how you suck. You don't hate that guy; you just don't feel bad when you push him out of the way to get the cool seat on the ride at Disneyland.

UCLA fans are the biggest front-running poseurs on earth. Be that as it may, I don't detest their school.
As for the other two, it's so damn hard... Satan or Voldemort? AIDS or cancer? Nixon or Bush? Mussolini or Bin Laden? Stanfurd people are sit-back-and-judge dweebs who convince themselves that their school is more academically challenging (as if) and average about 2.3 risks per lifetime, but at least I have some respect for their school. SC fans are the jackoffs who show up for the game in their SC shirts with their SC hats and their SC pants and their lame SC fanny packs and think that cheating is awesome and are actually proud that their band played on Fleetwood Mac's "Tusk."

I guess what it comes down to for me is, who's beating us more frequently at the time? In the ‘80s, when SC was king and we were holding our own in Big Games, I hated SC more. Then when SC was down and Stanfurd beat us seven Big Games in a row and 900 consecutive times in basketball and Tiger Woods and Chelsea Clinton were there and they were racking up bogus national titles in women's cross country and fencing every five minutes, I absolutely hated Stanfurd more. Now we're all over Stanfurd, in every sport (really), and USC has a professional football operation that we can't overcome, and I have to hear about it from my NFL friends all the time.

So I guess the short answer is, SC Sucks (and Stanfurd swallows)."

Cal fans can be a laid back, downtrodden bunch, especially after a game like that, and probably don't make as much noise as we could. How do we get them riled up for playing USC?

OK, let me explain something to you: This is not a choice. This is a battle between darkness and light, and it is a mortal fight to the finish, or at least until we get to Pasadena on Jan. 1 in my lifetime.

Last November, all three of my kids' soccer games were rained out, and I had a late flight out of Sacramento, and it occurred to me that I could roll down to the Cal-Oregon game. So I did, and I sat with my best friend in the pouring rain and was cold and wet and couldn't even booze cause I was driving. It was miserable. And we won. And I remember saying something like, "I could sit here and watch us beat SC while people pissed on me for three hours, and I'd be cool with that. But if you told me I could sit here all day and, uh, receive oral pleasure, and we lost? Pretty far from cool."

I guess that's my way of saying, you've gotta want it. Really want it. When we were 0-9 going into the 2001 Big Game at Stanfurd-that's two years after the game when we had eight false starts and 20 penalties in all and Stanfurd celebrated a Rose Bowl berth and my friends and I slinked away in our blue-and-gold bathrobes in agony-some of my friends were fed up and decided they weren't going. We were about to lose our seventh in a row, and it was dreadful, and I briefly contemplated sitting it out as a form of protest.
This was right after 9/11, and I remember having a revelation: Hell yeah I'm going, because I'm a Cal fan and even though my team is a joke and is as ill-prepared for this challenge as a college football team could possibly be, going to Big Game is what you do when you're a Cal fan. I said, "We will not be cowed by Holmoe-ism. We need to make a statement-to Stanfurd, to ourselves-that even in the darkest of times we are not going away." The next year we ended the streak in Berkeley and my friends and I were at Blake's literally pouring pitchers of beer on one another's heads and loving every drop of it. It was that good. And Saturday can be, too.

Look, one of the reasons I wrote what I wrote last Monday was to remind the less-grizzled Bear Backers what the deal is. Yeah, we're disappointed about the nightmare in Oregon, and rightfully so, but the bottom line is we're 0-1 and winning our conference is all that matters. Don't get caught up in the expectations and the polls and the Heisman talk and whether GameDay is coming to campus, because none of that stuff is ours.

The quest for the Rose Bowl? That's ours, and we hold it dear, as we should. And as long as we have breath, I'm gunning for Pasadena, and doing everything I possibly can to try to get us there.

My future wife, in college, was hammered one Saturday and came up with, "The crowd controls the game. And we control the crowd." And I still believe that. I was at The Play. I give up never. And the notion that what happened last week will somehow cause my people to be submissive against the University of Shameless Cheaters is untenable.

Yo, everyone, GET YOUR GODDAMNED GAME FACES ON. These are the Trojans, and we need to treat them like Trojans: Give them a rollicking ride, take them on a three-hour, dirty-talking, ass-slapping, multiple-orgasm-producing trip to the next dimension, and then tear ‘em off and flush ‘em down the toilet and grab a beer and fall asleep with a fat-ass smile.

Can we do that? Does a Bear s--- in Tommy Trojan's megaphone? Did O.J. do it? Did O.J. Mayo get paid? Is ‘Tusk' the worst song in the history of recorded music? Was it over when the Germans bombed Pearl Harbor? Let's dooooooooooo itttttttt.

(Oh, and don't forget the thing about buying my friends the pitchers.)