Martin Luther King day. A glorious day on which everyone recognizes a great historical figure, on which students everywhere enjoy a well-deserved day off and, this year, on which basketball-crazed Cal fans in the Bay Area were allowed a convenient glimpse of their new highly rated 2013 recruit, Salesian shooting guard Jabari Bird, playing in his future home of Haas Pavilion as part of the 2013 MLK Classic.

Bird and Salesian staged a late comeback against the De La Salle Spartans to emerge victorious by a score of 47-43. Let's take a look at how Jabari performed and examine how exactly he will fit on the Golden Bears for the 2013-2014 season.

Bird finished the game with 10 points. Certainly not a performance one would associate with a player as highly rated as Jabari. However, there were certainly encouraging aspects to his game that went beyond his seemingly unspectacular performance. First, it should be noted that De La Salle, as many opposing teams have rightfully done this year, keyed in on Jabari defensively, forcing his teammates to step up and score. As to be expected from a team as well-coached and disciplined as the Frank Allocco's squad, the Spartans did a very good job limiting Jabari's scoring load. However, when all was said and done, Bird offered a great contribution to the Salesian victory. 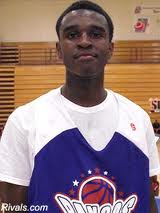 Through one quarter, Bird had four points. At the half, he had six. Four of those six points came on easy lay-ups, but his first score of the game came on the receiving end of an alley-oop that displayed Jabari's athleticism. Bird was also quite active on the defensive end and, in my estimation, he should be a very good defensive player at the collegiate level. At the half, with Salesian leading 21-20, I noted that, though Bird seemed to lack assertiveness, his selfless play resulted in scores for his teammates.

The future Golden Bear truly showed why he is so highly regarded in the second half, particularly in the fourth quarter. "But he only scored four points in the second half," some young whippersnappers might retort. But, remember what I said earlier! There was so much more to his game than the numbers indicate! First of all, with De La Salle leading late in the game, Salesian buckled down big-time defensively and Jabari was a huge part of that effort, displaying a high level of intensity and focus on that end of the court. Next, Jabari put his finishing touch on the comeback effort, hitting a massive three with the game tied and 56.5 left to play. He followed that with a big-time block to deny a De La Salle three-point attempt with 7 seconds to play. To be frustrated offensively throughout the game only to step up like that when his team needed him (and to maintain an admirable defensive intensity) spoke volumes to Bird's resilience, toughness and confidence.

My overall take-away from the game regarding the Cal legacy's future is that he will benefit greatly from the presence of other scorers with the Golden Bears. In particular, I feel as though both he and Allen Crabbe will benefit tremendously from the other's presence on the floor. Opposing defenses won't be able to key in on both players, freeing one of them to wreak havoc, as both Bird and Crabbe can beat teams with both their shooting abilities and ability to put the ball on the floor (a new-found skill for Allen). I thus feel as though it would be quite wise for Crabbe to stay for his senior season despite some experts projecting him as a potential first-round pick. Additionally, Mike Montgomery could do some wonderful things with a roster with this much potential talent. (I'm talking top 15 good...but let's not get ahead of ourselves).

It's easy to see why Mike Montgomery and his staff love Bird so much. Despite oozing with athleticism, he plays within himself and is a terrific teammate. He has no issue with backing off the spotlight if it puts his team in a better position to win. Jabari's defensive intensity and focus is also admirable, as is his ability to rebound on both ends. The future Golden Bear is not your typical five-star recruit. He does have the ability to take over a game. However, he refrains from forcing anything and his willingness to play within himself and within the flow of an offense is a trait not often seen in recruits so highly regarded. He will certainly have his fair share of huge scoring games and explosive dunks in his time in Berkeley but he will contribute to many victories in other, "smaller" ways.

My predictions for Bird are optimistic yet realistic for a player as talented as he is. I project Bird to be a strong candidate for Pac-12 Freshman of the Year in his first year playing in Berkeley. I don't expect him to put up video game numbers immediately, largely because he won't have to. He should be a starter from Day 1. As a sophomore, following the graduation of guys like Cobbs and Crabbe, this will be his team. He should be a candidate for Pac-12 Player of the Year and will be a player recognized on a national level. He does have the talent to leave for the next level after his sophomore campaign. If he stays to play as an upperclassman, he should be a candidate for a position on All-American teams. He's that good.

Sean Miller is getting a good one in De La Salle shooting guard Elliott Pitts. The Arizona-bound senior displayed the ability to score in a variety of ways. He can step out and shoot it from beyond the arc and he exhibited an ability and willingness to drive and finish quite effectively. His defensive ability was also impressive. While he may never be a star, he will be a solid four-year player down in Tucson. Pitts finished the game with 21 points.

Montana-bound Salesian senior point guard Mario Dunn is a very solid, very smart, very gritty lead guard. He doesn't beat himself, knows how to involve teammates and can take over games offensively at times. While his lack of height and explosiveness might limit him at the collegiate level, Dunn should still be a star at the mid-major level when all is said and done. Dunn finished the game with 15 points.

Cal coach Mike Montgomery was seen court-side snacking on what appeared to be a burrito of some kind. He had some trouble keeping the burrito together, though in his defense, it did seem to be poorly wrapped.