Did Cal beat UCLA because Dr. Evil was in the huddle? A CGB investigation (and a caption contest).

Cal basketball beating UCLA by that ungodly a margin at halftime was too sinister to be explained by simple basketball reasons (well, there was a whole lot of new motion sets and action with the guards and crisp, sound passing and general Bruin sloppiness, but I'm guessing you're not interested in all them fancy words).

No, there had to be other forces at work here. It wasn't just having the Cal football team behind the basket rocking and mocking the UCLA players, or Allen Crabbe taking shots from the moon, or Richard Solomon playing the game of his life.

We have our real reason for defeat here.

The real reason ucla got hammered at Haas by Cal tonight? Dr Evil was in their huddle: i1284.photobucket.com/albums/a569/er…

Here is the latest caption contest. What is Dr. Evil up to here? What is he thinking as Cal is crushing UCLA to smithereens? 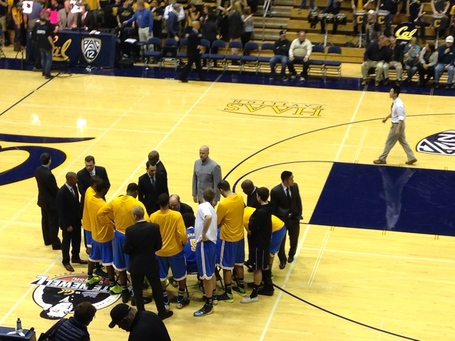 So who ended up capturing the Cal fan photoshop contest?

"Please rise if you took a class taught by a Nobel laureate."

Your runner-up is Bearly Legal with four recs.

"Please rise if you can spell 'laureate'."

What other lies can Manti Te'o tell us about Stanfurd?

Runner-up is classof87 with one rec!

The architecture of the Stanfurd campus does not remind Manti Te’o of a Mexican fast food restaurant.