Sonny Dykes spoke recently at Haas Pavilion on February 11th to talk about Cal football, his history, the new recruits, and what it means to be a California Golden Bear.

This series of posts was co-authored by solarise and atomsareenough. Kudos belong to both of our sturdy Golden Bloggers. Here's Part I, where Sonny makes his intro.

MoragaBear stepped up first and welcomed everyone to the event hosted by BearInsider. The man loved recruiting ever since the Russell White era. Event staff put out an abundance of food for China. solarise was mostly interested in finding coffee and perfectly minted Cal cookies, having already stopped for a lemon chicken Top Dog. Atoms hadn't had much to eat all day, so he was starving and gorged on sandwiches and deviled eggs. 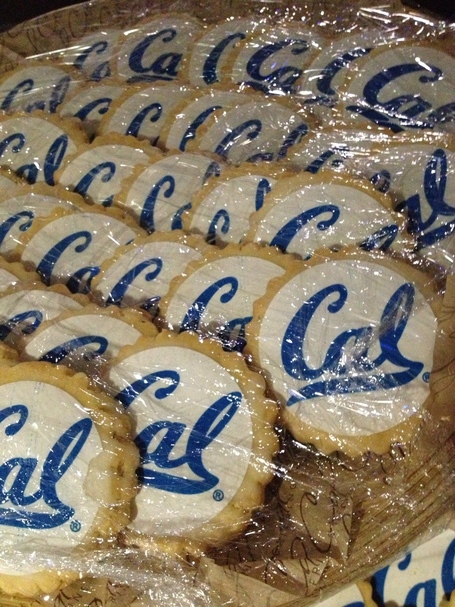 MoragaBear praised the job Coach Dykes and staff did this year to keep the recruiting class started by Coach Tedford and Company. We were able to keep most of our classes. The ones we didn't keep were due to academic concerns. This class averages 3.3 GPA or higher and will really go towards address the APR issue.

Three videos from BI were demoed, two from the early FR entrants and JC enrollees. Jared Goff and Matt Anderson got in front of the camera first. Goff said the transition to college is "going great", especially with regard to getting integrated into the football team. They said their new teammates are them feel welcome in their workout sessions. They mentioned they like having a few other kickers and QBs around to interact with instead of being pretty much the one main guy on the team at their position. They praised the academics and education at Cal. Goff is taking Philosophy, Psychology, and Public Health classes. Anderson is in Math, Public Health, and Physics. Being early enrollees, Goff and Anderson played host to the rest of the class in the last official weekend. As Bay Area guys they are not finding adjustments to Cal that difficult. They are looking forward to competing and getting better this Spring.

Second video came from the words of JC early enrollees Sione Sina, Kyle Kragen, and Drake Whitehurst. They also are not finding the adjustment difficult, coming from JC in the Bay Area. Teammates are welcoming them into the mix, though it's been a little slower than perhaps Anderson and Goff were experiencing, possibly since they hadn't been commits as long, they're enjoying their locker room interactions. Whitehurst pointed out that they're in an interesting situation since they probably know the new coaching staff better than the rest of the team at this point. The 6AM wakeup calls and workouts are taking some time to sink in. Whitehurst is taking Native American Studies, Philosophy, Sports & Society. Kragen has Sports & Society, History, and Business. Sina is taking a lot of history classes and Physics 10. Sina mentioned that the academics are definitely more challenging than the JC, but they weren't expecting it to be easy to be a Cal student. Kragen grew up locally as a Cal fan and seemed excited to be on the team. They're satisfied to be at the next level, and excited for spring to see where they match up. Sina is focusing on rehabbing and should be back by Fall Camp.

The third and final video is MMA-style training implemented by Coach Blasquez and the new staff. Khairi Fortt and Nick Forbes abused weights and dumbbells. Kameron Jackson showed off his fast hands with quick jabs against a punching bag. Brennan Scarlett put a punching bag in a whole lots of hurt on the ground with some vicious elbow jabs. Cedric Dozier pumped up the team after a great workout. Treggs was on the video for about 3 seconds but managed to get laughs from the crowd with his personality. The MMA routine was unique putting together strength and quickness. It made us both want to work out with Coach B. 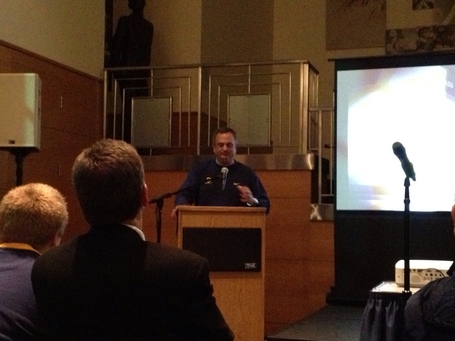 Finally, the man of the hour. The tower of power, except he didn't look intense or intimidating. Prior to the event solarise shared with Coach how meeting him was the highlight of his globe trekking. Coach Dykes seemed comfortable in public and engaged in small talk. He's definitely the kind of guy who you'd be happy to buy a sandwich at Cheese 'N Stuff for if you saw him. Atoms welcomed him to Berkeley and we chatted about our fanbase's collective angst, and how that would all go away if he is successful. We wished him luck.

Anyway, when he came up to the podium, Coach Dykes was full of anecdotes. He enjoyed telling stories and how the recruiting business is somewhat of a crapshoot. Back at Texas Tech under Leach they recruited a JC defensive back out of the Bay Area (maybe Laney in fact). However, on Signing Day, the kid ended up signing with Boston College and it threw the staff into fits. Since they still had one scholarship left, a recruiter brought a safety's tape from Oklahoma. He looked way too small and slow on tape and just wasn't their cup of tea. But the recruiter was persistent, and since they needed to fill the class, it was like, oh what the heck, bring the kid in on an unofficial visit. He looked worse in person than on tape. He was slow, not even 5'9" and even a little bit fat. The saving grace was that he had an infectious personality. Suffice it to say, the kid turned out to be Wes Welker and he made Leach and Dykes looked like geniuses. The kid they had wanted who signed with BC ended up committing armed robbery shortly afterward after holding up a 7-Eleven.

There's a lot that goes into recruiting, he said. You build a relationship with official visits, talk to the kids and see what they are interested in, and see if you can relate your program to that. Recruiting is really about who fits and sticks with a program. He said that a lot of the "can't miss" usually are "can't miss" because of their talent... but at the same time, it takes a lot, not just talent, to be successful, especially at a place like Berkeley. He recalled that in a recent year's recruiting class, there were five 5-star RBs. After the first year, only two were with the programs they signed with. After year two, zero RBs are with the program they signed with. Lache Seastrunk came to mind.

Coach is a big believer in establishing a lasting culture. The best example of this is really the New England Patriots. Players come and go, but the team's way of going about its business remains. There's consistency, the players play for each other, and they pass it on. You need the older guys to teach the new guys. That's how you build a culture.

This class was really focused on the OLs and the DLs. They wanted at least 4 quality OL, they got 5 of them. Coach is really excited about Sina and Kragen, having them commit late in the process but could really step up and play. This class also has four DTs and two have high academics. If there's any weakness the class could've really used 1 more DB. The staff aimed high for a couple of guys at the end but missed (LJ Moore and Patrick Enewally). In general, Coach is not into taking somebody just because you can get somebody. You want players who fit in to the culture. He said that decisions have to be based on the long term; you don't want to take guys just to take them. Signing guys that don't have any chance at playing, later on they can become a cancer in the locker room. If you miss a guy, at worst you may have to play against him one day a year. If you sign the wrong guy, you have to deal with him every single day.

Coming up next: More on the freshmen coming to Cal this fall.