UCLA @ California, redux: A Q & A on the Bruins of Westwood

Earlier in Pac-12 play, California journeyed down to the Southern Branch, where freshman phenom Shabazz Muhammed led a rejuvenated Bruins squad to victory. Several weeks later, Cal appears to have righted the ship, taking down Top-10 opponents Oregon and Arizona squads on consecutive weekends. This Singles' Awareness Day (SAD), a UCLA team tied for first in the Pac-12 standings comes into Haas Pavilion. Does Cal have another blue shell waiting, or is Cal's latest item a lowly banana? For more insight, we turn to Ryan Rosenblatt of BruinsNation.com. Thanks to Ryan for his candid responses. Go Bears!

Share All sharing options for: UCLA @ California, redux: A Q & A on the Bruins of Westwood

1. When Cal and UCLA last played, DCBruin was very critical of Ben Howland and was hoping for him to be gone. Since then, UCLA has played a whole lot better. Has Howland saved his job or is that more dependent on how far the Bruins go in the tournament?

UCLA is playing better, sure, but the bar for "playing better" than is not getting beat by Cal Poly. This is still an underachieving team that just got beat down at home by a really bad USC team that has an interim coach. Personally, I'd like to see him fired regardless of what has happened because Howland has burned many of his recruiting bridges in California so even if things are better now and he makes a miracle tournament run, they won't be that way for much longer. And that's still asking for a miracle to even make it a discussion.

2. Bears just saw the very impressive Jahii Carson of ASU this past week. Why should Shabazz Muhammad win the Pac-12 Freshman of the Year over Carson?

He shouldn't. Muhammad has been very good this season and if wasn't for him, UCLA wouldn't even be in the Pac-12 title race (no matter how much that title is diminished in a weak conference). But still, Carson has had a better season. He's average 18 points a game and five assists. Most importantly, Carson is playing good defense, which is an area Muhammad has a lot of work to do. Muhammad is great, but Carson has been better.

3. UCLA somehow has only played 4 true road games at this point of the season, two of the three wins were narrow victories over Utah and Colorado (while the 3rd win was an impressive win over Arizona). Including neutral court games (2-2), the Bruins are only 5-3 away from Pauley. Are you concerned at all about the Bay Area trip?

I'm very, very concerned. Even in the Bruins' wins at Utah and Colorado, their offense went MIA for stretches. Chalk it up to youth, inexperience or any number of things, there was no doubt that UCLA's offense looked worse on the road than it did at home, Arizona aside. With a defense that is inconsistent at best, the Bruins can't get away with an offense that goes cold for long stretches. That alone makes any road trip, this one included, concerning.

4. Is the 7 men rotation + cameo by Tony Parker taking a toll on those players at this point of the season? How concerned are you about how the short rotation would fair in the Pac-12 tournament?

The short rotation can be a killer at times. It's tough to say that it's worse at this point in the season than it was earlier because it hurts the team worse in some games than it does others depending on the style of play and Howland's rotations. It will probably be a killer in Vegas, too.

The worst part is that Howland has no one to blame but himself. He hasn't been hurt by injuries or something out of his control. The short rotation is the result of players transferring, which has been a common theme under Howland, and along with how many players have left UCLA early for the NBA knowing they were second round picks, it's not hard to believe that the program has become a place players are dying to get out of. 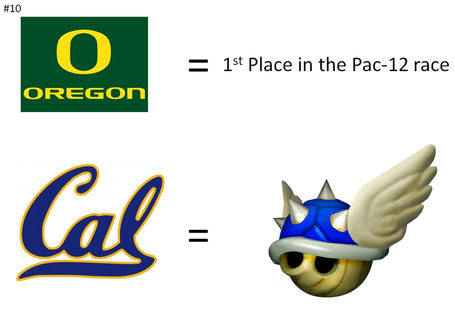 via i.imgur.com. This graphic increased in relevance when Cal won in Tuscon last weekend. How many more Blue Shells does Cal have?

5. UCLA started off the season on some disappointing notes. What do you attribute the Bruins' newfound competitiveness to?

The biggest thing is that the players grew up. There is youth on this team so they were always going to get better as the season went on, but the newfound competitiveness means not losing to Cal Poly and getting run by USC instead. It's not like they're competing at an especially high level right now, even for a young team. And that youth reason only goes so far when you have a senior at point guard and two redshirt juniors playing major minutes. They just don't play hard consistently, especially on the defensive end.

6. Who is the #1 player on offense for UCLA? How would you characterize your offense?

Without a doubt, Muhammad is the best player the Bruins have offensively. He's leading the team in scoring and is shooting 43% from three to go along with his finishing at the rim so he can get it done inside and out.

As for the offense, it's tough to characterize it because there isn't a lot of consistency from it. Sometimes they run set plays, with players coming off of screens for jumpers, but those fail as often as they work and the team relies on isolations and other less structured plays. So what is this offense? It depends on which trip downcourt.

Everything defensively is on Larry Drew. That's not necessarily a good thing because he's not always a great defender, but sometimes he has games where he's fantastic defensively, like he was against Washington. Without a big man who can defend the paint and two players who don't play good help defense in Kyle Anderson and Muhammad, good point guard pressure that disrupts the offense and forces turnovers is vital. That means it's on Drew.

8. What are the team strengths for UCLA?

The strength of this team is on the offensive end and their efficiency. The Bruins top the Pac-12 in scoring and field goal percentage, which isn't a shock considering Muhammad is one of the best offensive players in the country, Jordan Adams is tremendous, Anderson is exceedingly creative and Travis Wear can score. There are guys who can put the ball in the bucket and it shows on the scoreboard, even if they don't always do it together. 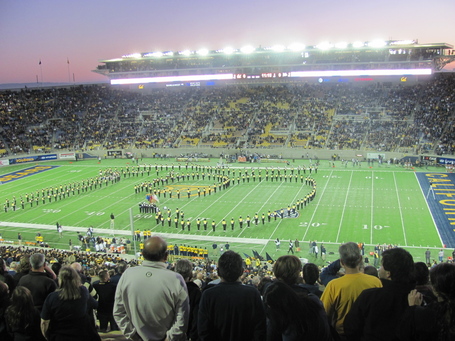 9. What are the team weaknesses for UCLA?

Keeping opponents out of the paint on defense and defending the paint. There isn't a shot blocker on the team except for Parker, who only plays sparingly, and Muhammad, Anderson, Adams and the Wear twins all struggle to stay in front of their man. That isn't a great combination and leaves the Bruins' dependent on forcing turnovers defensively.

Defend for 40 minutes. It's pretty simple for UCLA because they'll probably score enough, even on the road. They may take 30 minutes off defensively, though, and that's a good way to get beat.

The Bears have to keep from settling for threes and go to the rim at all costs. They can get probably there and no one will stop them there. They can also win the battle on the boards and get plenty of second chance points. It's tough to imagine a team doing those two things at home and losing.