Before I get into the nitty and, also, the gritty, a reminder to vote Layshia Clarendon for the Senior CLASS Award! Our recent efforts have catapulted Ms. Clarendon into the lead! For the 1/3rd of the vote that is the fan vote! And there's still another 6 weeks to go! So, there is still a lot of work ahead and even if we are successful here, the other 2/3rds of voters (media, coaches) will most likely screw us over. If we expect it, it doesn't hurt as much! So, get out there and vote vote vote. You can vote on multiple browsers, multiple computers, and if you are in private browsing mode, as much as you want. I might even get former Chicago Mayor Daly to get some dead people to vote for Layshia. Time to pull out all the stops! And don't forget to tweet out your #LayshiaFacts over on Twitter.

In this instance, they were sort of extra mediocre. For two main reasons. One is that I keep biting off more than I can chew. I got this new camera with additional zoom and I am really excited to get that great, perfect zoomed in shot. That generally requires everybody to stand still (and me to have some modicum of skill).

Well, when the teams combine for 177 total points (Cal won 91-86), it means that nobody is sitting still for long. This is the same problem I had with the rugby game the other week...except the lighting is worse in Haas. And I'm not that good of a photographer to begin with. Bottom line, I wasn't getting tons of great shots, because I was trying to get really amazing shots, but failing.

And then, it happened! My camera battery died. I never thought it could happen to me. I knew it could happen, but was too lazy to charge it. I'M BLOGGING NOT TO LOSE!

But it was OK. Maybe. I had brought my video camera. I was hoping to get a Harlem Shake video done with fans or the band or CheerSF or whatever. It takes stills, maybe it could work out! So, I tried a few shots.

And then its battery died, too. This is how I felt:

I felt like I had failed you all, let you down in your time of need. And, significantly more importantly, my goal of getting a Harlem Shake video was toast. Maybe they'll do it with the Student Section at the UCLA MBB game? A man can dream!

Bee Tee Dubs, this is by far my favorite Harlem Shake video to date:

Anyway, I ended up using my phone to snap some shots. Plan Z.

Here is Brittany Shine playing the drums prior to the game. I do love the WBB games insomuch as the atmosphere is generally pretty relaxed. 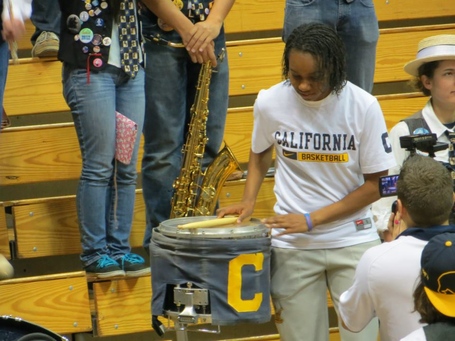 Before the game, they provided an award to Layshia and then gave Coach Gottlieb a nice tribute for her 100th victory. Of course, they were facing the other way. 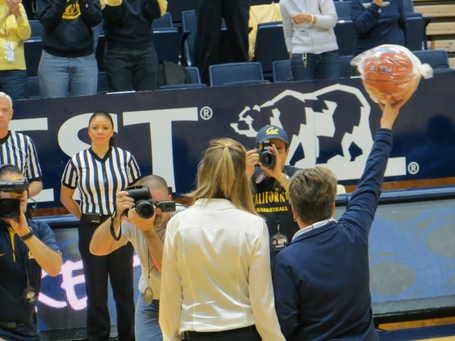 And the team did the middle of the court group hug. 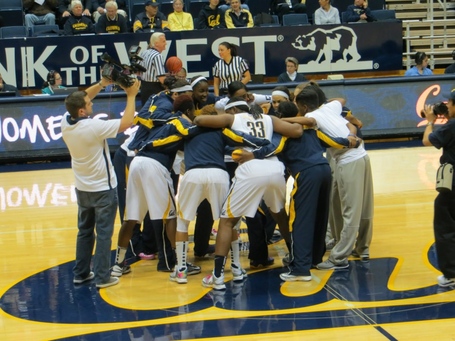 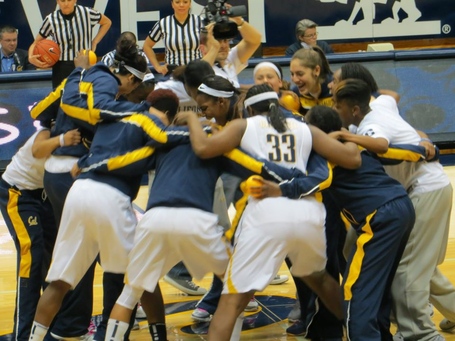 MicMan13 came out to get the crowd going. 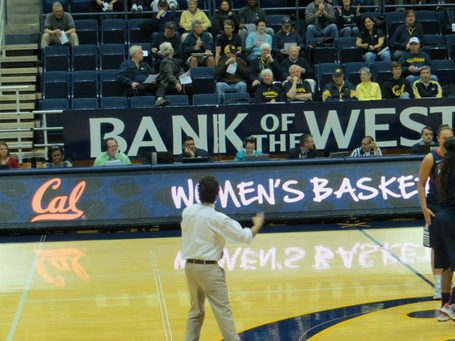 Solid turn out by the band. And if they need one more drummer, they can get it from Brit Shine! 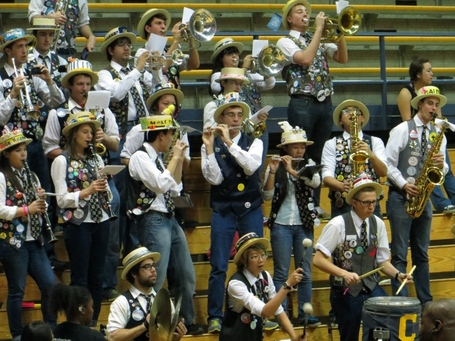 Even though the final score was only a few points in differential and even though Cal's D couldn't really stop Arizona, I never thought that Cal was going to lose. We did seem to stub our toes on free throws. Cal ended up shooting less than 60% on free throws throughout the game. 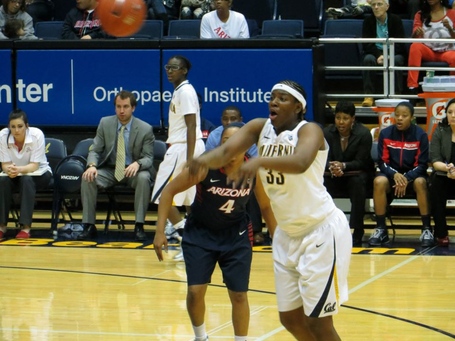 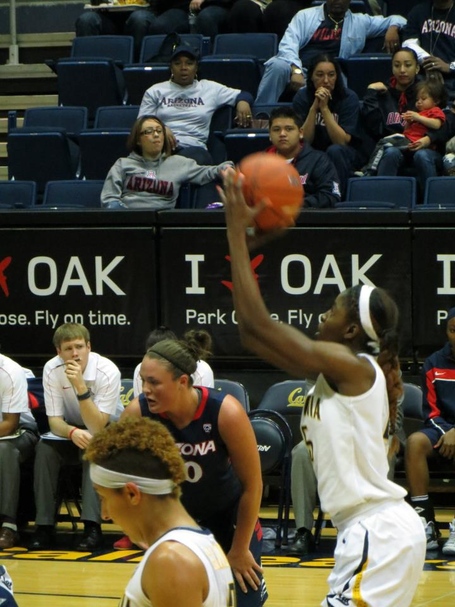 Layshia actually left the game for a while. It appeared that she may have sustained an inadvertant punch to the side. Or an advertant one. Things were getting a bit chippy out there. Also, chirpy. They do let them play in WBB and tempers flared high at times.

Layshia came back to a standing ovation though and appeared to be fine. 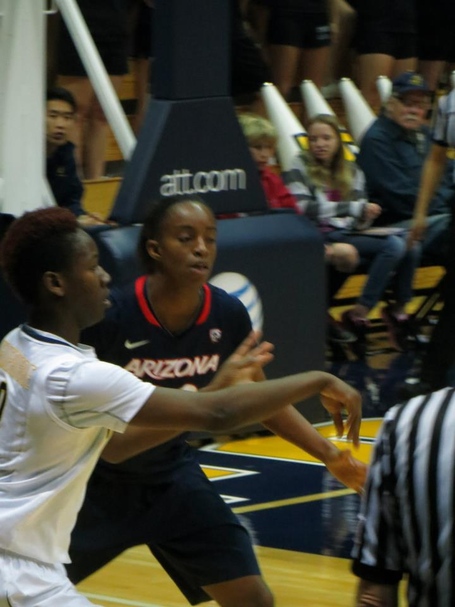 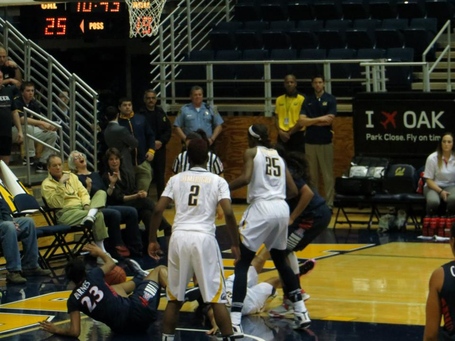 We're working on organizing the Lindsay Gottlieb Wikipedia page. What it lacks is a photo of her. So, I snapped a few shots that might work. What are people's thoughts on this one? 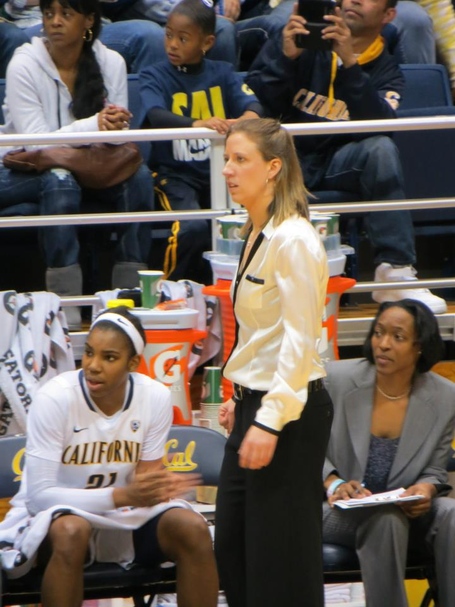 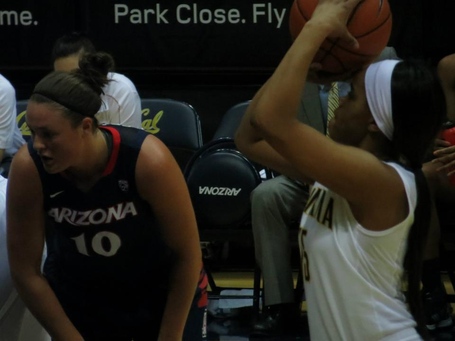 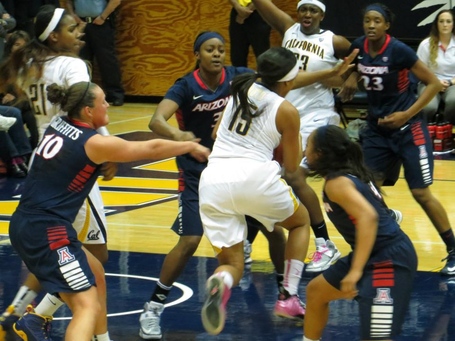 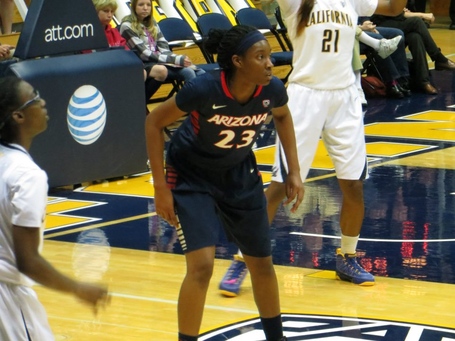 Natch, CheerSF was there. I have come around on them. Before I thought they too happy. My own internal misery must be matched by what I see around me, dammit! But now that I have overcome my self-loathing, I say, Cheer On CheerSF, Cheer On! And can somebody find me a good psychiatrist? 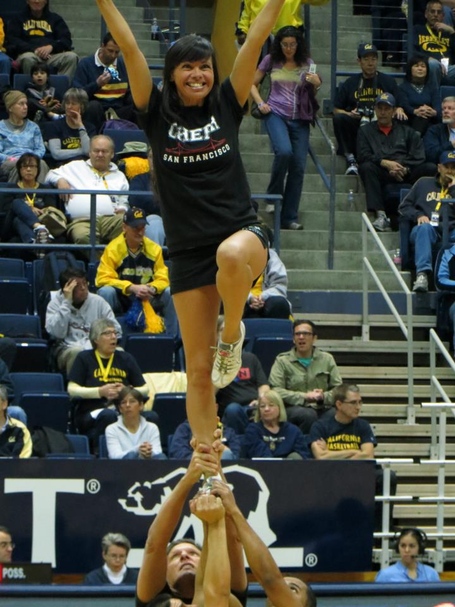 Talia Caldwell and Gen Brandon (pictured below) both had double doubles. Great games from them at Haas. 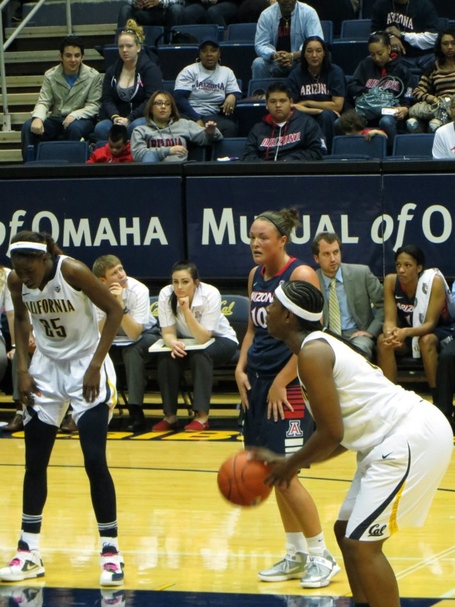 Here is another photo of Gottlieb. Should we use this one? 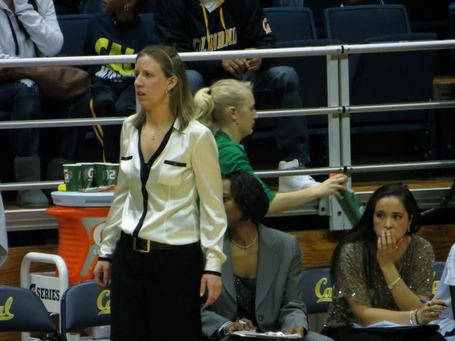 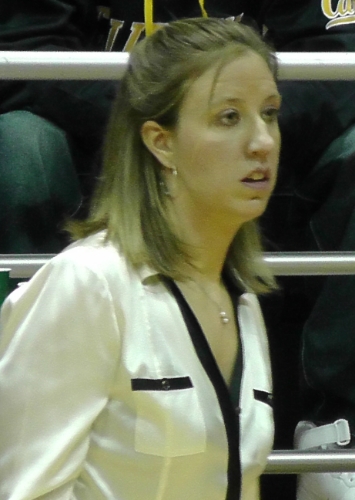 While Coach Gottlieb looked Wikipedia ready, the Arizona coach looked like she had just gotten back from a poetry slam:

Here are some videos from valued reader CalBear81. So, we have some first half shots, some second half videos. Don't say we never do anything for you. Just that I am terrible at charging batteries!

I guessed four. I was wrong. 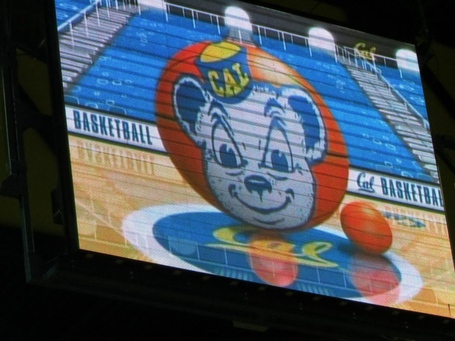 And here is the final score. Cal got up by like 15 in the second half, but managed to squander most of that lead. Not great! But a win is a win. CELEBRATE GOOD TIMES, C'MON! 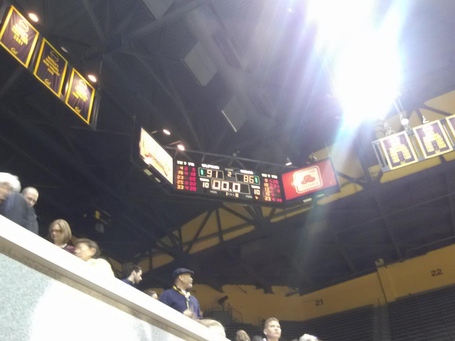