What are your favorite Cal memories of 2013?

Despite a bad football season for the California Golden Bears, there are still some good memories to share from other sports, particularly basketball.

Share All sharing options for: What are your favorite Cal memories of 2013?

January 13th: With 2:02 left in the first half at Maples Pavilion, Mikayla Lyles hits her 4th three pointer of the half to give Cal a stunning nine point lead. As she heads back down court, her tongue wags out with the sheer joy and shock of crushing Stanford's defense nearly single-handedly. She set a career high for points in a game in about 10 minutes of gametime on the home court of the Pac-12's hulking, unbeatable juggernaut.

It launched Cal's Pac-12 title winning season and was the biggest factor in earning Cal a 2 seed in the NCAA tournament's west region. But mostly, it was a moment of pure joy and excitement on the court.

April 1st: Due to a bit of bad scheduling luck, I'm attending a Cal event with the Cal Grid Club of Sacramento on the exact same date as the Cal women are playing Georgia in the Elite 8. I'm following the game on my phone as surreptitiously as I can. But the Bears trail by 10 with 6:46 to go. Hope fades.

I'm distracted by clean up from the event, but I hear that somehow Cal has come back to force overtime. 20 or 30 Cal fans pile into the bar to watch the end of the game and agonize over every free throw attempt. And when Georgia's final attempt fell short, I watched a Cal basketball team achieve something I never thought I'd actually see.

Nam Le: Taunting the crap out of Shabazz Muhammad on Valentine's Day with my friend Kelsey. We brought this sign: 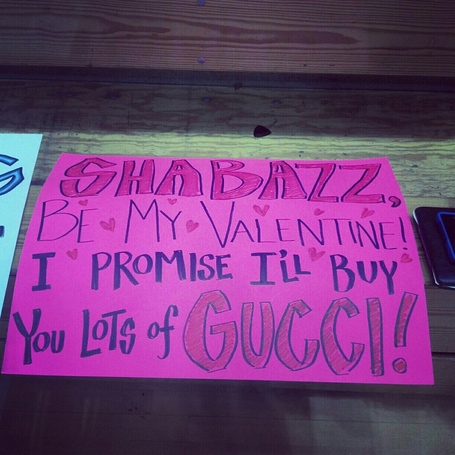 to the game, stood right behind Bill Walton, and me being me, I screamed at Muhammad for the entire 40 minutes. Shabazz finished with 4 of 13 shooting for 13 points and Cal won, so I consider my job well done here.

The best part was catching his teammates staring at the sign out of timeouts.

Ruey Yen: In the calendar year 2013, I would probably have to say that my favorite Cal athletics memory is when Cal Rugby finally won the Collegiate Rugby Championship. Beside this being the only team championship for Cal in 2013, it was also one of the few events that I got to witness in person. To make it even more special, I found myself high-fiving the players on the field (since I was "covering" this event for CGB) after they have won this Rugby Sevens championship for the first time ever. 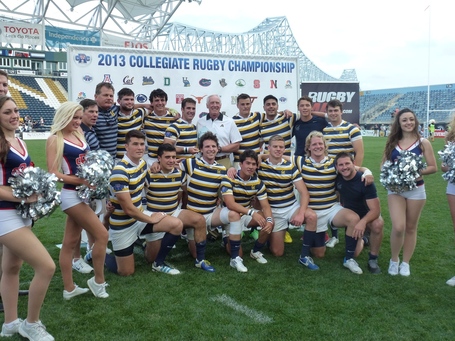 Leland Wong: I suppose the first official football memory of 2013 is my favorite. We had a great opening drive against Northwestern, moving the ball consistently with some strong runs by Brendan Bigelow. The offense started to stall and we decided to settle for a field goal. Er.... make that the first touchdown of the Bear Raid, with an electrifying pass from K Vincenzo D'Amato to WR Jackson Bouza! Oh, how bright our future looked those days...

Sam Fielder: No question my favorite memory was getting to attend the opening night football game at Memorial with my dad. It was our first Cal game in over 20 years and we were able to be there and to scream our heads off for the fake FG TD and to cheer for our Golden Bears in what was really their best played game of the season. No matter what happens in 2014 and beyond, August 31st 2013 against Northwestern will always remain one of my favorite Cal memories of all time.

Vincent S: Watching Cal enact revenge on UNLV live in San Jose. For that moment, all was right in the world.

LeonPowe: Watching the Thurmanator outplay the #1 overall draft pick. The first drive and field goal, wait no, touchdown for #bearraid (oops, I thought that portended good things). A season of watching Allen Crabbe (a thoroughly unappreciated star player for Cal if there ever was one).

And how about this? (it's my computer background, but I thinking of changing it due to all the injuries)