It is a busy bowl game Saturday with four bowl games to be played today. Here is the schedule:

The day starts with a morning matchup between Notre Dame (8-4) and Rutgers (6-6) at Yankee Stadium. For all you Golden Dome haters out there (you know who you are), I'll throw you this bone. I saw this in a store while Christmas shopping last week. 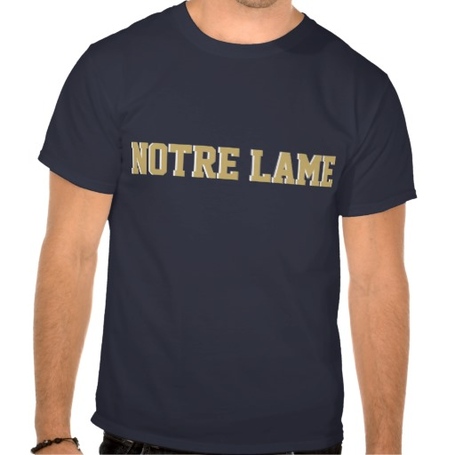 I had a strange urge to buy it, but didn't know anyone to whom I could give it. There are few, if any, ND haters in my life.

But I digress. Pinstripe Bowl. Yeah. Bowl organizers are probably thrilled to have Notre Dame and the nearby State University of New Jersey as the participants. The Irish have some quality wins on their ledger (Michigan State, Arizona State, USC) and played Stanford tough in the season finale. Rutgers, meanwhile, had zero quality wins. But hey -- who am I to judge? I'd love to have six non-quality wins and appear in a bowl game!

After the Pinstripe Bowl, it's on to the Belk Bowl in Charlotte, NC. Cincinnati (9-3) versus North Carolina (6-6). (Make sure you answer the poll question below, BTW.) Cincinnati will be trying to defend its Belk Bowl title, having defeated Duke in last year's Belk Bowl. The Bearcats earned this year's trip to Charlotte with a six-game winning streak that was snapped in a tough overtime loss in the season finale against #18 Louisville. They will face a North Carolina team that did not look the part of a bowl-eligible squad in mid-October when it started the season 1-5. But the Tar Heels won five straight games to get to six wins.

The Russell Athletic Bowl in Orlando kicks off after the Belk Bowl. This one is an attractive matchup between Miami (9-3) and #18 Louisville (11-1). This may be the final college game for Louisville quarterback Teddy Bridgewater, who may skip his final season and enter the NFL Draft. Bridgewater failed to make it to New York as a Heisman Trophy finalist, but he did have a nice season statistically, throwing for 3,523 yards and 28 touchdowns, with only four interceptions. Miami will attempt to gets its 10th win, which would give the Hurricanes their first 10-win season since 2003.

In the nightcap, the Buffalo Wild Wings Bowl in Tempe, AZ has the Kansas State Wildcats (7-5) against the Michigan Wolverines (7-5). (Mmmm...buffalo wings!) This game features teams that were headed in opposite directions during the second half of the regular season. Kansas State started 2-4 (including a home loss to FCS North Dakota State), but won five of its final six games. Meanwhile, Michigan began the year 5-0, but lost five of its last seven, including a memorable 42-41 loss to Ohio State in the Wolverines' regular season finale. Ohio State's failure to cover the tight end in that game may have looked familiar to those of you who watched that game.

This is your open thread for all of today's bowl games. Talk about all the action here as you watch. Enjoy the games.