For the first time this season USC fielded a team with Marqise Lee and Silas Redd what did they do against Oregon State and what does it signify for Saturday? GIFs and play analysis.

Share All sharing options for: Scouting USC 2013 - Rest of the Pac Breakdown

USC entered 2013 in a free fall. The Trojans ended last season without Matt Barkley and the team with the nation's leading receiver, Marqise Lee, struggled to produce on offense. This season began with a proof of the football aphorism: if you have two quarterbacks, you do not have one. Alternating between Max Wittek and Cody Kessler, Lane Kiffin's offense consisted of forcing the ball to Marqise Lee on every play resulting in defensive shoot outs with Washington State and Utah State. USC spent all season looking for a running back without Silas Redd, who suffered a knee injury in spring football. SC's troubles culminated in a 62-41 loss at ASU (tied for the most points USC had ever given up) where the heavy workload for Lee resulted in a a knee injury. While the performance was one that most coaches would have survived, Kiffin had the charisma of a dead skunk and the Trojan fan base was looking for any excuse to remove the road kill.

Enter Ed Orgeron, the long time SC defensive line coach and former Mississippi head coach took over as interim head coach for the Trojans. He picked Cody Kessler as his starting quarterback and without Marqise Lee USC was forced to use other players on offense. It was a combination that seems to have produced results. At 6-3 (3-2 in the Pac) USC is bowl eligible and in the hunt for the Pac-12 South title (who isn't?). Now Silas Redd and Marqise Lee have returned to the field and the result was scary. Against Oregon State the Trojans had two backs over 130 yards (Redd and Javorius Allen), Lee had over 100 yards receiving and Kessler completed 80% of his passes.

The marquee Trojan player, hasn't put up the games that he did with Robert Woods opposite and Barkley delivering passes but he is just as dangerous as ever. Before the game Orgeron said Lee would have limited snaps and may be used as a decoy. Well this was USC's first offensive play:

That is some decoy... The Beavers (easy to spot in October Orange) seem to have just ignored Lee's presence. Lets take a look at what actually happened.

USC has a bunch formation to the left and a single receiver on the right. Marqise Lee (#9) and Nelson Agholor (#15), the Trojans two big play weapons, are in that bunch. Oregon State is in a base 4-3 defense with a linebacker, Cornerback (#16) and Safety (#25) covering the bunch. USC has a full slide left pass protection called. Against Oregon State USC used multiple formations to establish slide protections, probably to disguise pass and disguise the slide direction (as the running back will always be the weak blocker). 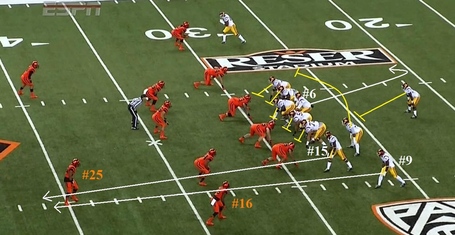 Kinda, terrifying... Lee and Agholor are running to the exact same point on the field. I'm pretty sure this was supposed to be a deep rub route but the Safety #25 bites hard on the play action.

The corner is rubbed/picked off of Lee and there is no one deep. Any quarterback should look like an all conference performer with no pass rush and a wide open receiver.

It quickly became obvious that if Lee was in the game the ball was going to him.

Slide right protection. Lee runs a Hook Route and turns it into a 20 yard gain.

With only 2 receptions against OSU, I actually went to an older game to find good highlights of Agholor. Of course they came when Lee was out injured and #15 was the primary target.

Here USC is in the Diamond with Agholor at the top of the screen. Utah is in a 4-3 defense.

This play resembles the spread concept with deep receivers stretching the field and the running backs open shallow (yes, I wish Cal would use some of these plays). I'm not sure Kessler can read past 1 but he doesn't have to here:

Agholor gets into a hole in the zone and that is the end of the drive (replay showed that Agholor's divebroke the plane of the goal line with the ball).

This is the same Rub Route play we saw above on the Lee reception. Here Agholor is the orange route and once again he runs an In while the outside receiver runs a Post. The blocking is the same slide left scheme with play action as the one against OSU, except this time the Tight End/H-Back in the bunch does not cross the formation to block. 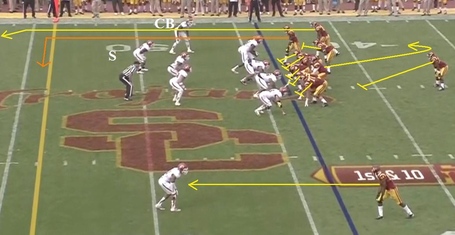 The Utah secondary does not bite on the play action and the Corner is able to stay with the outside receiver and has help from a deep safety. The Safety covers the H-Back who is blocking and the Nickel Back playing Press-Man-Coverage on Agholor loses him in the break which is behind the dropping linebackers and in front of the deep safety.

Lets see that from another angle:

Cody Kessler and the Pass Defense

USC is plenty aware of their weakness, here they use a Max-Protect Slide right Scheme. 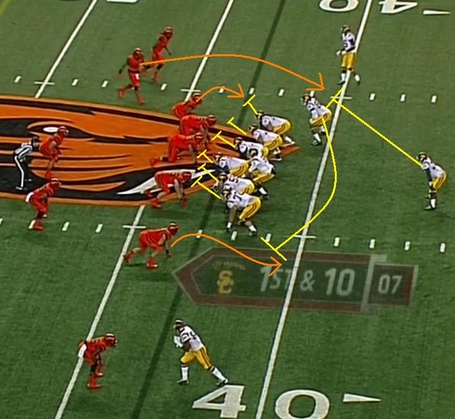 Because it is Max-Protect there are only 2 receivers in the route while OSU has 5 men in coverage.

Kessler pumps, pulls the ball down and is sacked.

Max-Protect and still a sack. The running back and H-back barely delay the pass rushers off the edges.

Here is another Max-Protect Situation. The only two receivers are both wide left, the Tight End on the right will stay in to block. The line has a slide left protection called.

After the snap we can see that Oregon State is rushing four. One Defensive End is blocked by the Tight End while the other is blocked by a running back and ALL FIVE offensive linemen block the two defensive tackles. 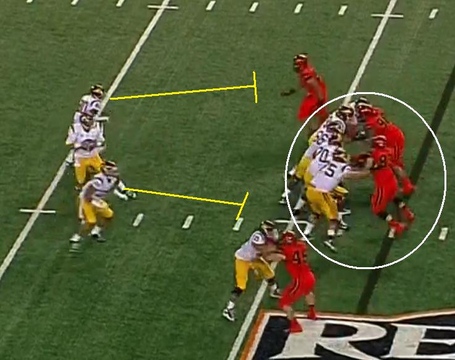 Running back isolated on a Defensive End... Mismatch.

The linebackers see the running backs blocking and come on a delay pass rush. Kessler does his impression of a Matador but this is the running of the bulls. Kessler actually throws the ball away to the right... where there are no receivers... And this is quickly ruled Intentional Grounding.

Really? Looks more like Maximum Brain Dysfunction (to borrow a phrase from this guy). Why does USC persist in using this pass blocking scheme? It matches up athletic pass rushers (DEs and LBs) with running backs and tight ends while severely limiting the quarterback's throwing options.

USC finally used a screen to take advantage of all the pressure from the outside. It looks like slide right protection but is really a clever play:

Not a Trick Play

That is the Center snapping the ball on first sound while Kessler tries to call an audible. USC won this game 31-14. How did they manage that?

Though the passing game results in big plays USC runs the ball more than 2:1 over the pass. This has resulted in similar yards per game on the ground and through the air, regardless of the result of the game.

#25 is Silas Redd. USC has a Tight End tight left, one wide out left and two wide outs right. 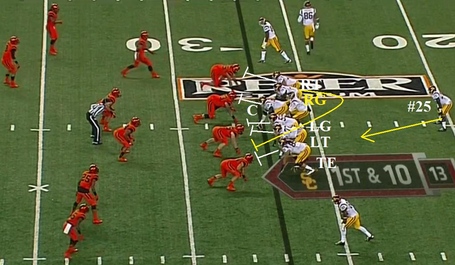 Nothing fancy about this run, a pulling Right Guard and a double team of the Defensive Tackle at the point of attack.

OSU stuffs the hole but the Defensive End loses contain and the Safety crashed inside allowing Redd to get outside for 8 yards.

Redd had an outstanding game but his long run was 23 yards. Javorius Allen (#37) was the back who had the break away runs.

In the red zone USC has dialed up an off tackle run against OSU's 4-3 defense. The Tight End is tight left and will block the strong side middle backer. The left Guard will pull to kick out the Defensive End while the rest of the line blocks down to the right. The Fullback will give a lead block on the safety. 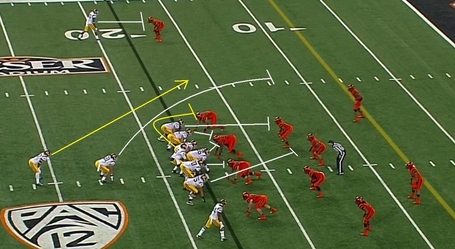 All does not go as planned and the Defensive End beats his blocker but Allen is able to put on a move that almost breaks the End's ankles. The rest is blocking and speed.

Allen would have two more runs for touchdowns. Here is his longest run of the night.

OSU is showing Blitz and this run is designed to go into the teeth of that blitz. The right Guard pulls to block the Defensive End while the H-Back lead blocks through the hole. 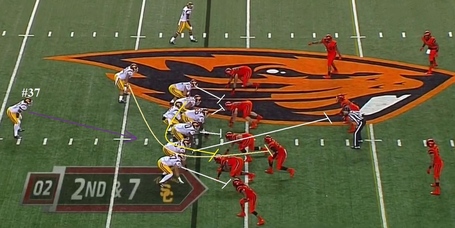 Only the Safeties are unblocked and both underestimate Allen's speed.

Allen hits the brakes and the DB flies right by.

Power run game with backs that can break a big run at any time. Explosive receivers in the passing game. And I haven't even had space to talk about Clancy's defense which is the most consistent group for SC this year. The Golden Bears are going to have their hands full at Memorial on Saturday.

I don't believe the Trojans' flaws were fixed by excising Lane Kiffin. The team is playing with more energy but it still inconsistent and not very deep on the depth chart. Cal needs to avoid the three and out on offense so that they can wear down SC's defense. I think the improving Cal defense will give the Bears a shot at winning but Goff and the offense need to produce points when they have the ball. ASU won a shootout, Notre Dame and WSU won defensive struggles. Whatever happens I am sure we will hear lots of The Only Song They Know and You found another song, it's just as bad and twice as long (nope not a single link to Conquest that doesn't make me nauseous). It will be sufferable as we hear lots of Fight For California.