A Golden Spotlight on Cal vs. Arizona

Taken in a vacuum, this was a great game. It was competitive from start to finish and kept us entertained on a beautiful Saturday at Memorial. When taken in context with this season as a whole, you had to be encouraged by signs of growth and improvement by a young Cal team. Were there mistakes? Of course. But there were also breakthrough performances from guys playing out of their minds. Take away the number on his back, and you wouldn't have recognized Hardy Nickerson Jr. as the same kid criticized as slow as man who seemed hellbent on wreaking havoc anywhere and everywhere. And I need not write any more than two words: Kenny. Lawler. Enjoy the ride, Cal fans. Appreciate the little victories. We're on our way back.

Share All sharing options for: A Golden Spotlight on Cal vs. Arizona 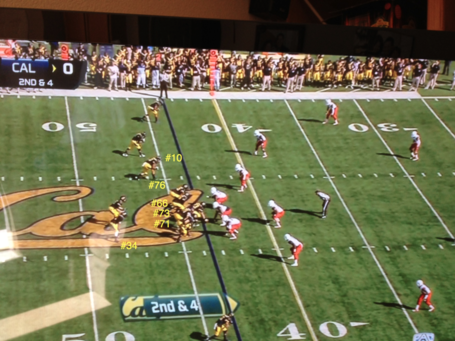 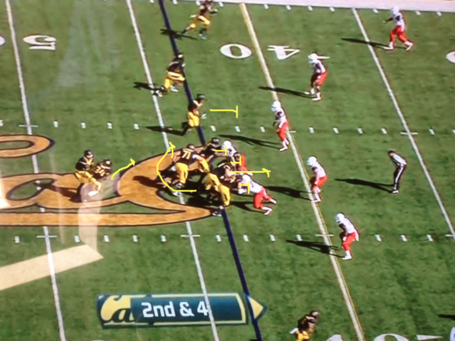 Rigsbee(#73) has their tackle while Okafor(#76) has their end. Borrayo(#66) slides off their tackle and moves to the 2nd level to take out their MLB. Powe(#10) locks up their slot defender. 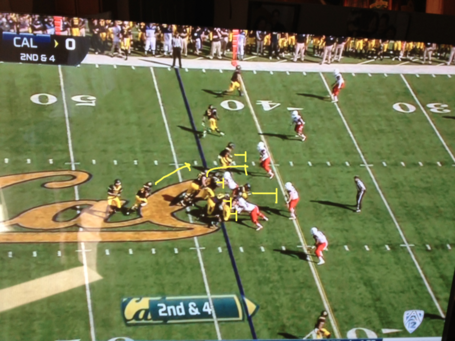 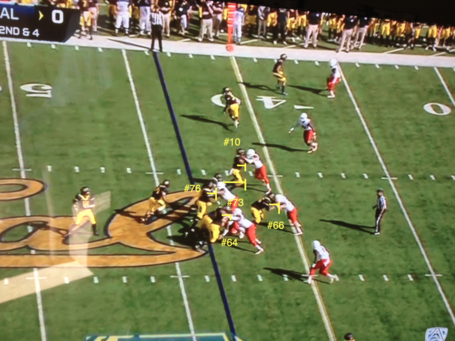 ...it's a solid running play with Ervin(#34) running for a Cal first down. 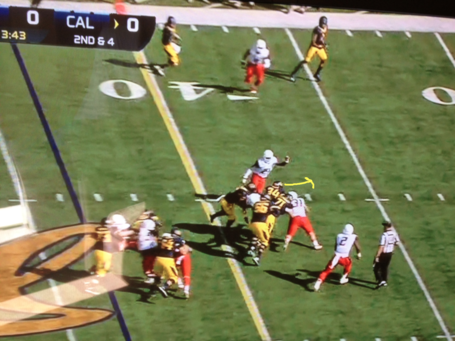 Cal lines up with 11 personnel.(1 TE, 1 TB) As a different wrinkle, Rodgers(#11) is lined up on the line as a traditional tight end. Arizona is in a 3-3-5, with the box loaded and just one safety deep. 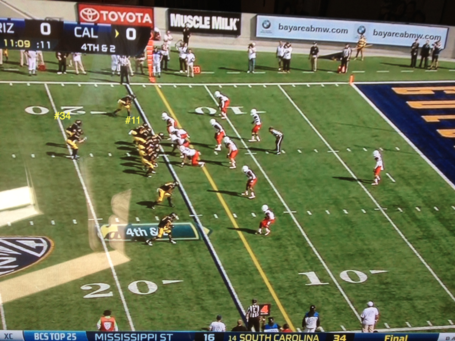 At the snap, the entire Cal offense blocks down while Goff meshes with Ervin. 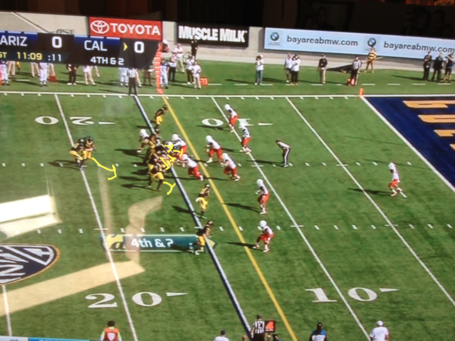 The timing is what makes this play. Goff pauses after the fake hand-off while Rodgers also pauses at the line as if looking for someone to block. Neither player was capable of this type of patience early in the year. 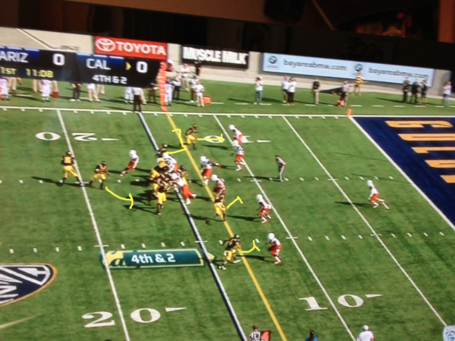 ...now Goff does a half-roll while Rodgers releases into the pattern. Because they paused to sell the play fake, it's an easy pitch and catch for a crucial first down. 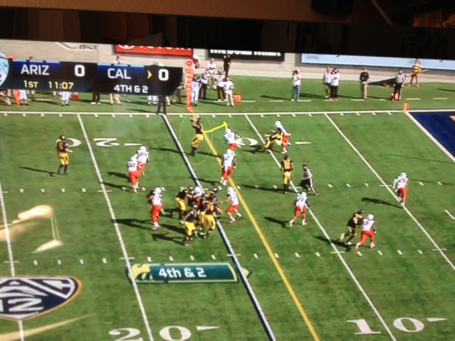 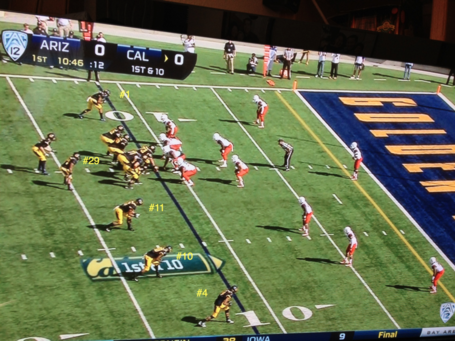 It's a classic Bear Raid play. The three wide receivers all run deep inside breaking routes(a variant on 4 verticals) while the tailback (#29) sneaks out beneath them. 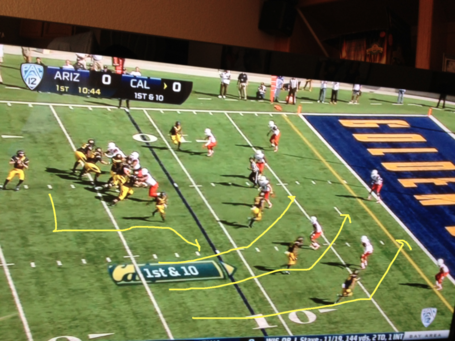 Because Cal's wideouts have drawn the Wildcat's zone defenders, Muhammad(#29) is wide open underneath. 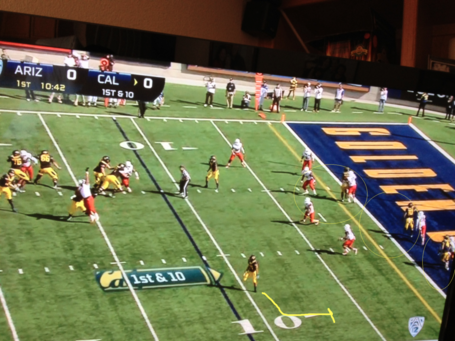 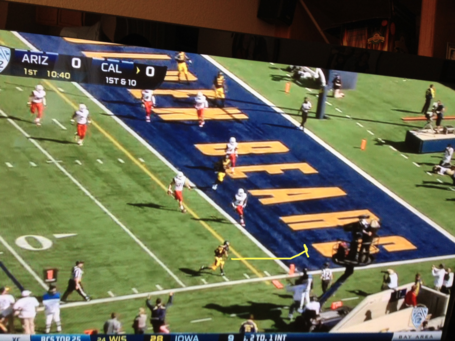 Shifting focus to the Cal defense, we take a look at the Power of Vanilla. Cal is in their base 4-3. Arizona pauses for a Check-With-Me. 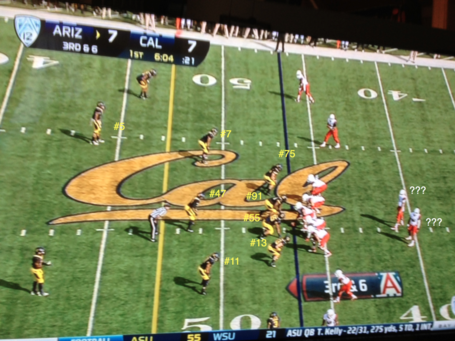 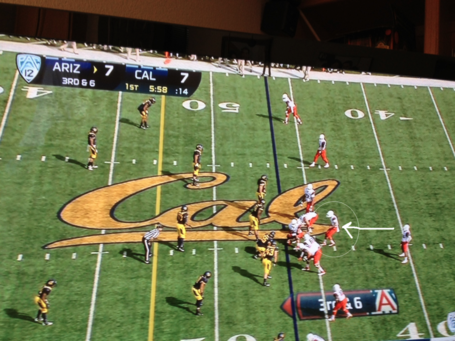 ...as a counter, Lowe moves forward to audible a different playcall to the Cal D. 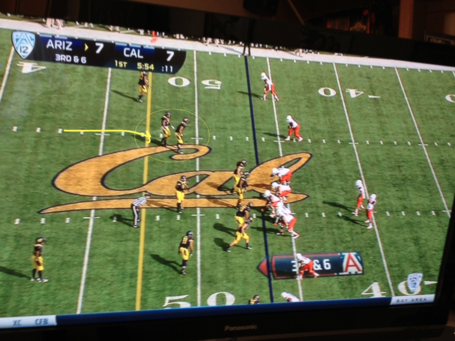 ...And at the snap, Lowe(#5) switches positions with Jefferson(#7). We switched from a Cover 3 look to straight Cover 0, man free. Lowe is on the slot receiver while Jefferson(#7) and Nickerson(#47) blitz. Fortt(#11) has the tailback. 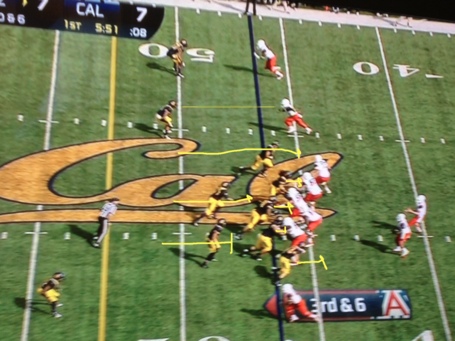 Zona's tailback stays in protection which prompts Fortt(#11) to rush. The blitz is mostly picked up, but allows Campo(#43) a free run at the QB off the edge. 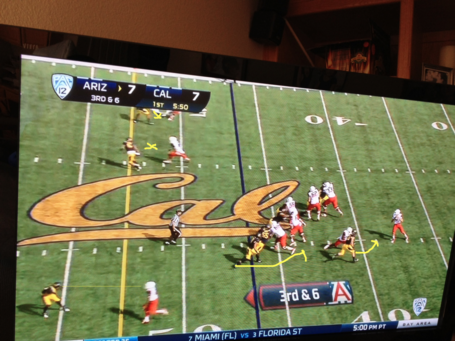 Campo dives at the QB and forces an early throw... 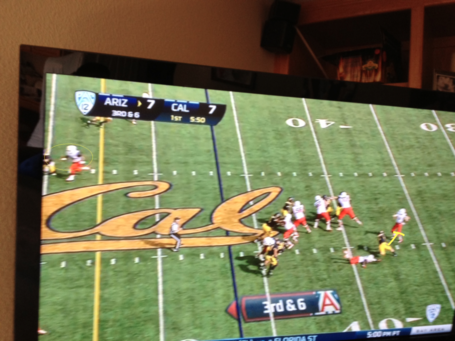 ...because the WR hasn't come open yet, Lowe(#5) is in great position to defend the play. 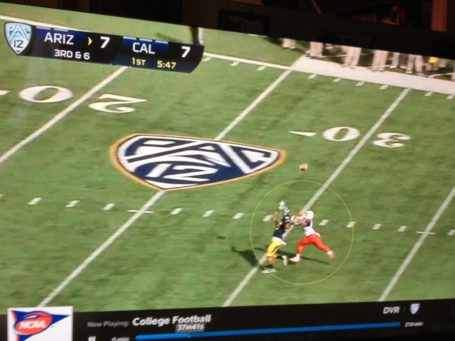 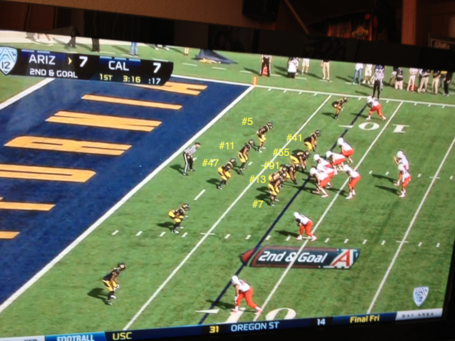 At the snap, the Arizona Oline blocks to the right/top, while Denker fakes a handoff to Carey. 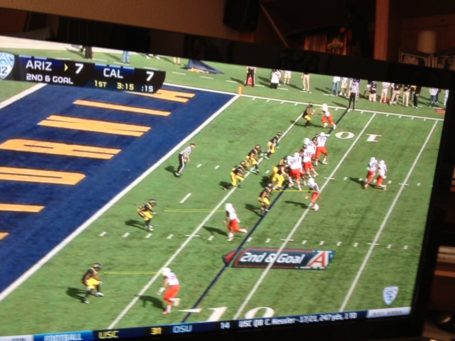 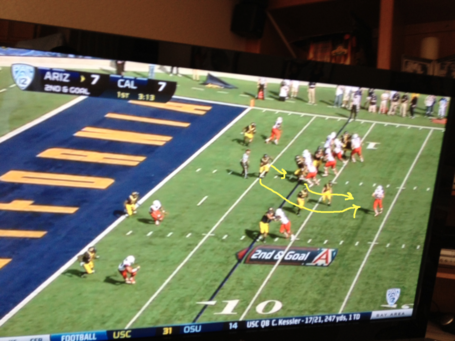 Nickerson(#47) shows off impressive closing speed as he downs Denker for a huge TFL. Here's a much maligned young player finally playing fast because he's going with instincts instead of reading/thinking. 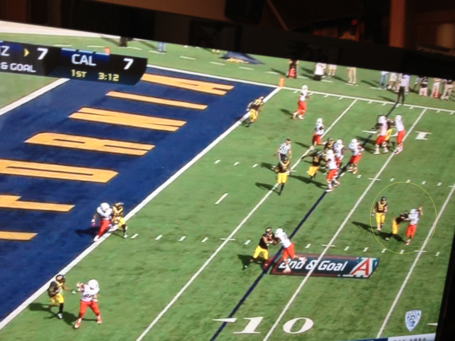 Bonus coverage: Just because it was a cool play, let's look at Cal going into the red zone with 3x1 personnel. They just established the run by pounding Lasco for two consecutive plays. 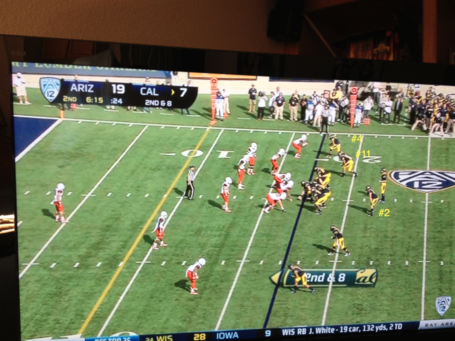 At the snap, Cal's entire offense flows left towards the bottom. The Oline slips the Dline making it look like a tailback screen to the left... 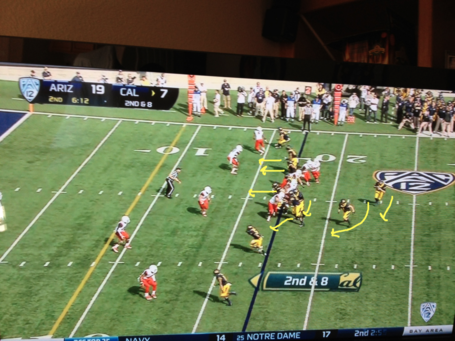 ...but Goff wheels around and instead delivers a quick strike to Lawler on the slip screen. 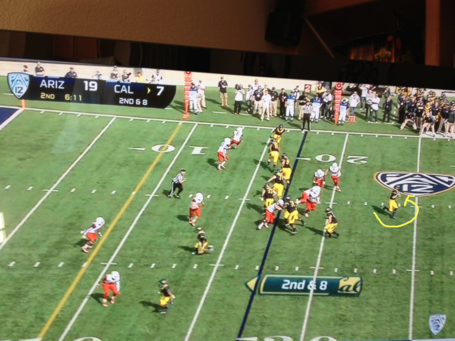 ...Lawler snags the ball and has Rodgers plus three Oline in front of him. Maybe Kline would have cured cancer while repairing the ozone layer while magically keeping his Oline from being too far downfield. All I know is that Goff delivered a nice ball on time... 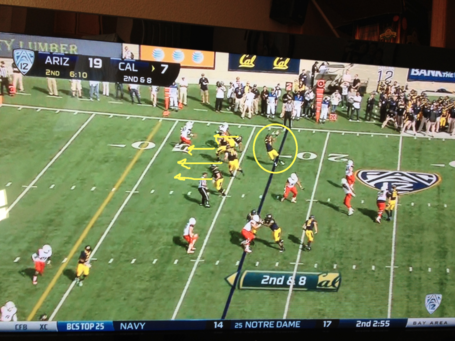 ...and gave Lawler a free run to the end zone. Touchdown Bears! 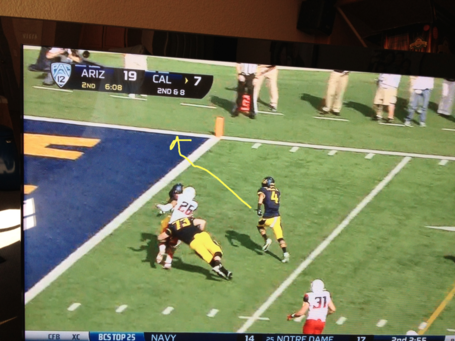 Great to see a number of young players step up. Borrayo, Walker, Nickerson, and Dozier all took a step forward. Hat's off to Jordan Rigsbee for making it work at an entirely new position on short notice. That has every possibility of making him look really bad, but he has sacrificed for the team and done his best. Keep in mind that the Franklin/Dykes offense relies on the center to call protections, so taking that on after just two weeks of experience is worth some serious street cred.

I think carp said it best: "Cal got better and there are fans complaining?" Must be a sad thing to dwell in the negative. Shame on you if you're booing these kids or cussing them out. Is there anyone more hated than U$C or Furd? Let's back our guys and shock the world. Go Bears!