"They ruined my last game as a college player. It was a very bittersweet ending. I did not want it to end this way. It's something I'll have to live with for the rest of my life." -- John Albert Elway, Jr., November 20, 1982

Yes, Mr. Elway, the California Golden Bears did ruin your last game as a college football player. But if you're going to whine about it, why not admit the whole truth: the California Golden Bears actually ruined your entire college football career. It was the Bears who ensured that you had a losing record as a college quarterback, had only one winning season (a whopping 6-5!), and never played in a college bowl game. And we loved every minute of it! 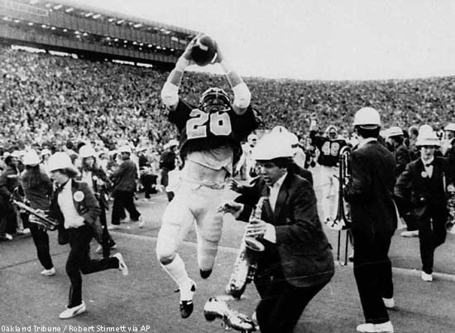 I wonder if John Elway has ever seen this photograph? (If he looked really hard, he could see me in the stands.)

This week, Leland Stanford Junior University will be retiring the jersey of John Elway, one of its former players. It is interesting that Stanford has chosen to hold this ceremony during its game against Oregon, instead of at the Big Game, which will be held in Palo Alto this year. It is unclear whether this decision was made because of the embarrassing fact that Stanford's Big Game record was 1-3 during John Elway's tenure, or whether the Powers That Be in the South Bay remember that the downfall of their last "hero," Tiger Woods, began at the 2009 Big Game, when Cal fans recognized what kind of man Stanford was choosing to honor. It was less than a week later that the rest of the world found out as well. Whatever the reason, Cal fans are being deprived of the chance to honor John Elway as we would wish. So we will have to honor him here, by remembering just how much misery the California Golden Bears inflicted on him during his sadly ruined college career.

Intuitive Cal fans booing Tiger Woods at the 2009 Big Game, just six days before his "secret life" was revealed to the whole world. He has never been the same since he received this Cal booing.

When John Elway arrived at Stanford in the fall of 1979, he was already being touted as a great quarterback. Before he played a down of college football, the San Francisco Chronicle, Sports Illustrated, and other publications were anointing Elway as the best quarterback in history -- not the best college quarterback recruit, not even the best college quarterback, but the best quarterback ever at any level. Those of us who were Cal students at that time thought maybe the guy ought to actually do something before being crowned as the best ever. But we also knew that's not how things are done at Stanford.

During his freshman year, The Anointed One was not good enough to get the starting job, instead spending most of the season on the bench, watching senior Turk Schonert run the Cardinal offense. He did get some playing time, managing to throw 6 TDs and 3 interceptions in 9 games. But it was Shonert who got all the playing time in the 1979 Big Game. Elway watched from the bench as the Bears put away a 21-14 victory at old Stanford Stadium, and headed to the Garden State Bowl, while Elway and his 5-5-1 Cardinal stayed home for the holidays.

The job of starting quarterback was handed to Elway for the 1980 season, and the press duly reported that his time had come. But it turned out to be an up-and-down year for the Cardinal. Elway had his best game of the year against #1 ranked Oklahoma, throwing for 237 yards and scrambling for 95 yards, as Stanford pulled off an impressive 31-14 upset. But then Stanford lost to UCLA, Washington, and USC, leaving them with a record of just 6-4 heading into the Big Game. Still, the bowls liked the attention that followed Elway wherever he went, and it was reported that as long as Stanford defeated the woeful Cal Bears, the Cardinal was guaranteed an invitation to play in the Peach Bowl against Virginia Tech on January 2.

The Bears, by contrast, had a horrible season in 1980. Quarterback Rich Campbell set an NCAA record for completions in the season opener against Florida, going 43 of 53 for 421 yards, and yet the Bears lost 41-13. Cal had a 24-10 lead against Arizona in the fourth quarter, only to end up losing 31-24. USC wiped them out, 60-7, and during that game Rich Campbell suffered a season-ending injury. The Bears had a 2-8 record going into the Big Game, and were left with a third-string walk-on, J Torchio, as their starting quarterback. Everyone assumed it was a sure thing that Stanford would beat the lowly Bears easily, sending John Elway to his first bowl game. Everyone, that is, except the Bears and their loyal fans.

The students showed up in force at Memorial Stadium and, back in the day before anyone was searched, the students were loaded with peaches to heave at the Stanford Band with giant slingshots -- in honor of the Peach Bowl, of course. Long before the game started, the student section -- yours truly included -- was chanting: "Hey Stanford, Eat My Peach!" as the peaches flew over the field, eluding the best efforts of the Stanford lacrosse team to catch them. There may have been some water balloons mixed in for variety.

The Bears took the opening kickoff on a methodical 80-yard drive, ending with running back John Tuggle scoring on a 15-yard run. (For more on the life of the truly heroic John Tuggle, click here.) Stanford tied the game up 7-7 on the next possession. In the second quarter, though, Cal scored on back-to-back drives, featuring excellent passing by walk-on quarterback J Torchio and great running by Tuggle. Suddenly it was 21-7 Bears. At the half, the Cal students went wild, chanting "Eat My Peach" maniacally, and throwing out so many peaches that the field looked like a fruit salad. Still, Stanford finally came back in the fourth quarter, tying it up 21-21. It was sick-to-your-stomach time for Cal fans, as we wondered if this longed-for opportunity to embarrass Stanford and keep Elway out of a bowl would slip through our fingers.

When Stanford got the ball again at its own 5-yard-line with less than 5 minutes to go, Cal fans feared that Elway would live up to his billing, lead his team to a last-minute score, and destroy the Bears' hopes. Elway did come through -- for the Bears. He fumbled a hand-off to running back Vincent White. The ball was recovered by Cal's Dupre Marshall at the Stanford 3, and on the next play J Torchio carried the ball into the endzone, putting the Bears up 28-21. Elway did take the Cardinal on another drive, down to the California 6, but the Golden Bear defenders wouldn't let him get the ball in the endzone, and Stanford turned the ball over on downs. The Bears took an intentional safety with 22 seconds left, and the game ended with a 28-23 Cal victory and no Peach Bowl for Mr. Elway. The Anointed One was beaten by a 2-8 Cal team, a 15-point underdog, led by a third-string walk-on quarterback. It was one of the sweetest Cal victories ever.

Highlights of the 1979 and 1980 Big Games. John Elway's fatal fumble is at about the 2:20 mark. His reaction should bring a smile to the face of any Golden Bear.

Sadly, the 1981 Cal team was even worse than the 1980 edition. That year Elway managed a 42-21 home victory over the 2-9 Bears. But Stanford was pretty dismal itself in 1980, managing only a 4-7 record. So despite the Big Game win, once again there was no bowl game for Mr. Elway.

1982 was John Elway's last shot at going to a bowl. It was also his last shot at winning a game in Berkeley. Before the season began, there was much talk about Elway winning the Heisman Trophy. But the Cardinal had another up-and-down season, featuring both a stunning 43-31 upset of #1 Washington and a humiliating 35-31 loss to San Jose State. As the Big Game rolled around, the 5-5 Cardinal were just hoping for a win, which would guarantee them a spot in the Hall of Fame Bowl -- finally getting John Elway to a bowl in his very last chance.

So, would Elway finally get a win in Berkeley? Would he pull out a second winning season at Stanford and get to a bowl game? For a few moments, it sure looked like that was going to happen. The 1982 Big Game was a thrilling back-and-forth game, filled with spectacular plays and heart-stopping moments. Trailing 19-17 with 93 seconds left, Elway's team was 4th-and-17 on their own 13 yard line, and we Cal fans were howling. Then he completed a long pass out to the 42, followed by a 19 yard pass to the Cal 39. Next Mike Dotterer ran for 21 yards down to the Cal 18. With 8 seconds left, Elway called for a time out to set up the field goal. The field goal was good. Oh no! It was every Cal fan's nightmare. Finally beaten by John Elway's endlessly discussed greatness. There was much gnashing of teeth. Why would our sturdy Golden Bear watching from the Sky let this happen to us? Oh, but wait. There were still four seconds left. Stanford still had to kick the ball off. And after all, the Bear does not quit, and the Bear does not die:

It's possible that you may have seen this before.

Despite the whining of Elway and the rest of the Palo Alto crew, the game ended in a 25-20 win for the Golden Bears. It was, in fact, the most amazing, sensational, dramatic, heart-rending, exciting, thrilling finish in the history of college football.

So John Elway came into two Big Games guaranteed to go to a bowl if he could just beat the underdog Golden Bears. But instead, he ended up with two Big Game losses, a losing career record as Stanford's starting quarterback (15-18), two losing seasons out of three, and zero bowl game appearances. (Tell me again why they are retiring this guy's jersey?) If Cal hadn't pulled off those two Big Game upsets in 1980 and 1982, Elway would have had a winning record as a starter (17-16), two winning seasons out of three, and two bowl game appearances. Yes, I guess I can understand why Mr. Elway doesn't want to set foot on the same field with the California Golden Bears again -- they really did ruin his college football career.