Cal lost to Arizona 33-28, in a close game that was competitive until the end. Several young players - including WR Kenny Lawler, DB Cedric Dozier, DB Cameron Walker, and RB Daniel Lasco - all made significant contributions in the hard-fought loss. Let's take a look at some game notes, stats, and selected tweets.

Share All sharing options for: Cal vs. Arizona: Postgame Notes 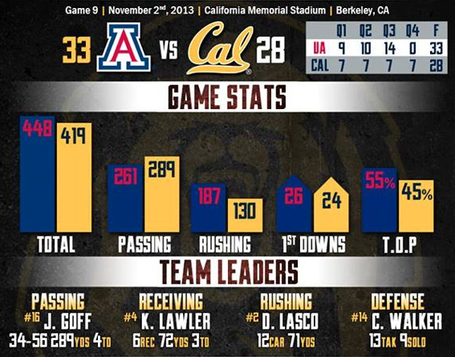 Despite Saturday's tough loss [infographic courtesy Cal Athletics] there were a number of encouraging signs.  CGB's own Vlad Belo summarized it well in his game recap:

In the end, it was a loss, and losses never feel good. But for a Cal team that was uncompetitive in most, if not all, of the losses during the current losing streak, being in the game with a chance to win was a refreshing change.

The Bears played hard all game and were competitive from the start.  The opening drive touchdown - on an 11-yard pass from Jared Goff to Khalfani Muhammad - gave Cal its first lead since the Portland St. game:

Cal kept it close through late in the 4th quarter - with significant contributions from Kenny Lawler, Daniel Lasco, Cameron Walker, and Cedric Dozier - but the Bears couldn't come away with a W at the end:

Cedric Dozier, a redshirt freshman, started at cornerback. He was the sixth different cornerback, 11th different defensive back and 45th different player to start a game for the Bears this season.

Despite an early 7-0 lead and a valiant 60-minute effort, Cal dropped its seventh straight game in a 33-28 loss to Arizona in front of an announced crowd of 41.874 fans at Memorial Stadium.

Lawler was indeed Cal's breakout performer, and his 3 TDs - including a highlight reel catch - earned him a helmet sticker from Uncle Ted:

So who deserves a helmet sticker for a job well done? ...

Kenny Lawler, WR, California: Lawler only caught [six] passes for 72 yards in the Bears loss to Arizona, but he accounted for three touchdowns, one of which was an absolutely spectacular one-handed grab.

This is worth a look if you like spectacular football plays. http://t.co/Bp8LkgJG8K

Lawler's touchdown receptions were the first of his career, and his one-hander made ESPN's Top 10 plays:

Redshirt freshman Kenny Lawler had touchdown receptions of 17, 3 and 29 yards to become the first Cal player with three TD catches in a game since DeSean Jackson in 2006. They were the first three touchdowns of Lawler's career.

Lawler's one-handed TD catch No. 8 on ESPN's Top 10 Plays of the Day. Check it out! http://t.co/Gy1wdEUmzD #espn #calfootball #gobears

During the postgame press conference [quotes here], Coach Sonny Dykes and QB Jared Goff both complimented Lawler for his efforts:

Dykes said he just had a good conversation with Lawler in the locker room. "Some of the things he can do are pretty special."

re: Lawler - "Kenny has the chance to be pretty special, need him to keep develop(ing), shows flashes like you saw today"

Goff & Lawler up next: Jared says "Kenny really stepped up today and did a great job"

Goff on who's catch is better: @K_Law2nice or @mauriceharris3 : 'Uh, jeez, uh, I can't answer. They're both incredible one-handed catches."

Per Cal's official postgame notes, Goff marked a new career-best with 4 TD passes - despite 2 costly INTs - and is now one spot behind a Cal legend on the single-season passing list:

Jared Goff ended the day 34-for-56 for 289 yards and a personal-best four touchdown passes. In addition, Goff was not sacked once. Now with 2,881 passing yards this season, Goff ranks fifth on Cal’s single-season top-10 list for passing yards. Aaron Rodgers is fourth (2,903 in 2003).

Coach Dykes also had good things to say about the secondary and the defense in general:

They did their best. Solid. RT @CalRivals: 17 players played on the #Cal D today. Only subs: Barton, Kragen, Hunter, Ragin, Lapite, and Lee.

Sonny remained optimistic while giving a candid assessment on the team:

Dykes: "I think that they want to see tangible results. The fact that we played better together, shows them we're making progress."

he mentioned 2 turnovers & inability to convert short yardage situations... but said (Cal) players expect to win & credit to their character

Definitely an improvement, Dykes says, but "our goal is to win the ballgame."

This season's been difficult so far, but like our players, our fans - including Chancellor Dirks - haven't quit: