A Golden Eulogy on Cal vs. Stanford

Stick a fork in this season. Good thing we're and aquatic and basketball school, right?

Share All sharing options for: A Golden Eulogy on Cal vs. Stanford

Let's think back to a happier place. It's early in the game and the contest is still in doubt. Sure, the Furds ripped through our defense like a constipated stool through cheap tissue. But the Bear will not quit. We'll counter-punch! Right?

Cal goes empty and lines up Khalfani (#29) in the slot as an additional receiver. The Furds look to be in nickel personnel and are playing zone with a safety shaded to the strong side. 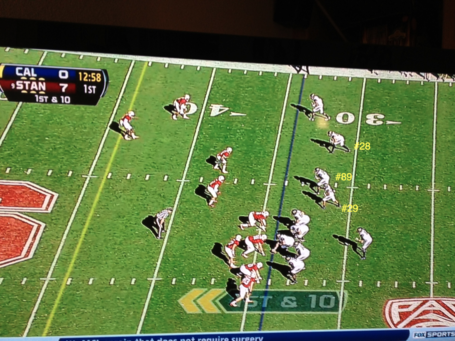 At the snap, Khalfani(#29) runs a wheel route and Goff pump fakes in his direction. To sell it, Khalfani leaps as if catching a pass. The play-action gets the Furd slot defender to bite and he sprints upfield to cover Khalfani. Lawler(#4) takes their outside corner deep with a go route and Anderson(#89) draws attention across the middle with a post. 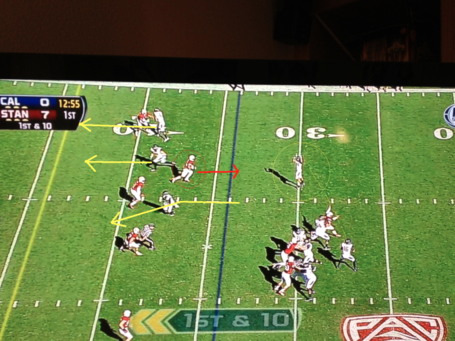 Bouza(#28) is left wide open up the seam. Goff threads the needle and hits him over the LB and before the safeties. 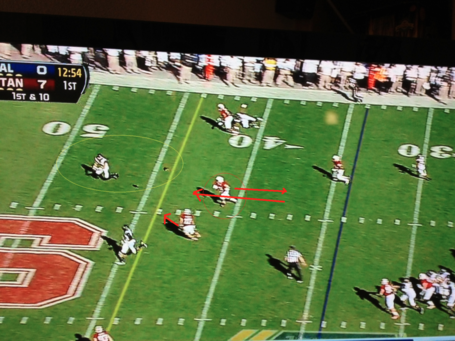 It's a huge gain to move the sticks into Furd territory. Roll on you Bears! 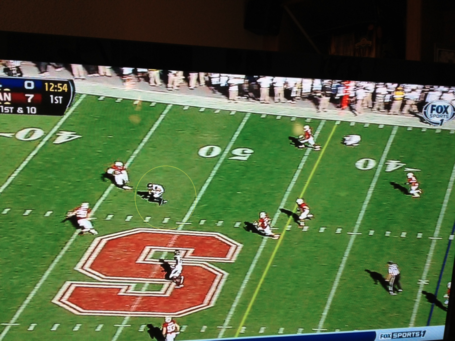 Cal is back to their standard 4 WR, 1 TB personnel. However, Rodgers (#11) is on the line as a tight end. Stanfurd looks to be in a Cover 2 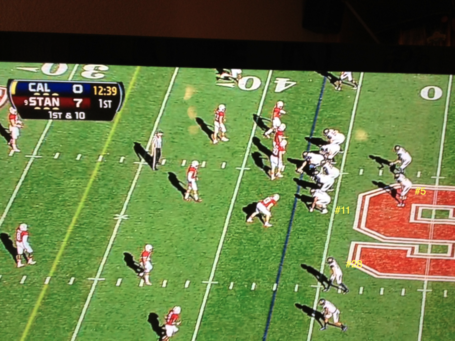 At the snap, it's a pitch to Bigelow. The Oline zone-blocks to the strongside. Rodgers(#11) cuts their DE. Rigsbee hits their nose tackle. Borrayo and Okafor run to the second level to hit their LBs. 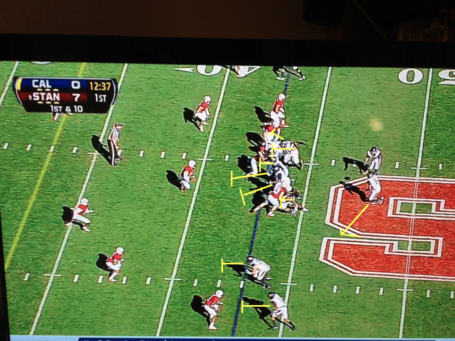 Borrayo and Okafor are able to cut their OLB. Meanwhile, Bouza hits their safety and Treggs takes out two defenders. 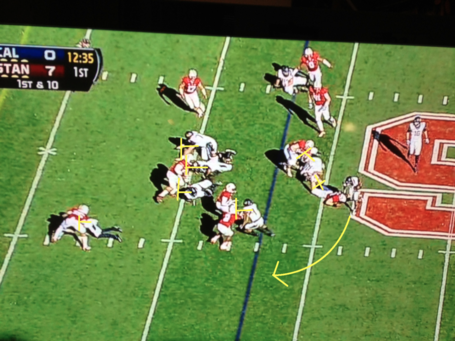 Bigelow is free to make a run at the edge. It looks like three Furds have an angle on him... 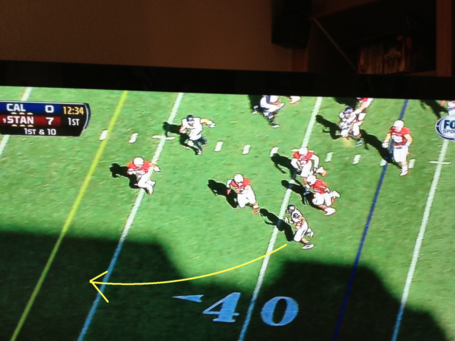 ...and they are wrong. He sprints down the sideline before being forced out by a shoestring tackle. Where has this been all year? (Bigs was tentative with his thrice surgically repaired knee, and our blocking from the slot has been poor.) 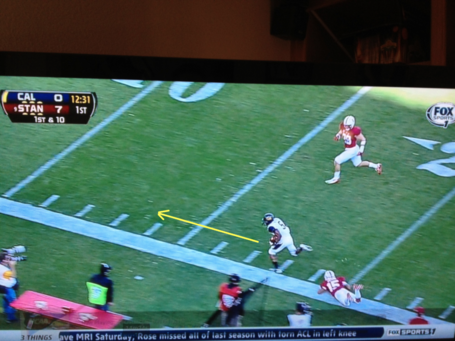 Cal is in the dreaded red zone and comes out in the rather unique Speed Bone Package. Bigs (#5) and Muhammad (#29) are wings with Ervin (#34) as the deep back. Furd looks to be in a Cover 3. 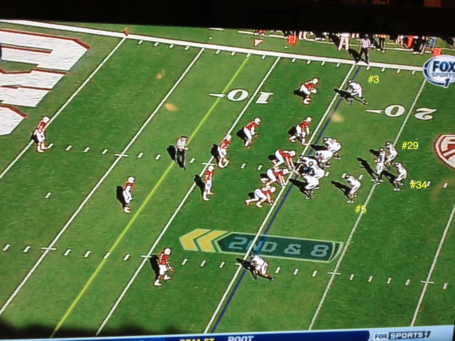 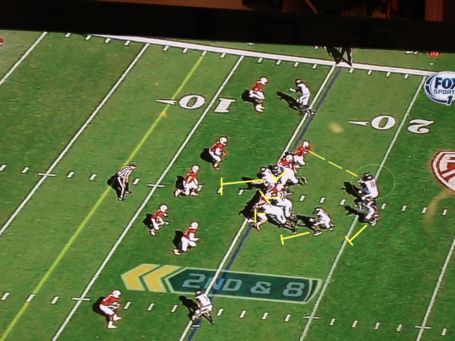 ...but it's not a run. Goff holds the ball and stays cool in the face of two unblocked defenders. The run-blocking Oline and backs completely fool the Furd safeties. Harris(#3) is left in solo coverage to the outside... 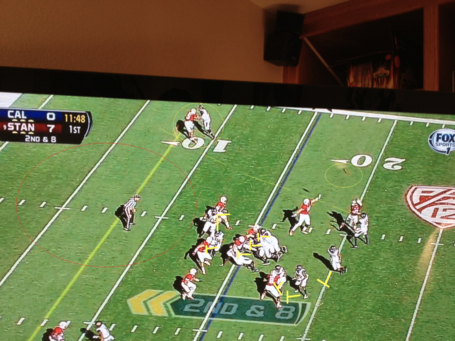 ...Goff drops it in the bucket. It's a perfect fade to Harris for the score. Touchdown Bears! 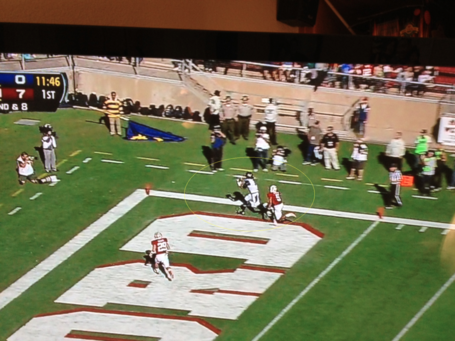 Before the season began, I wrote that success would be measured by on-field improvement rather than wins and losses. As we thankfully put this one away, I have no answers. Part of me says that the coaching staff and players deserve another year of continuity and health for an accurate appraisal of where we're at. Another part of me says that youth be damned, by the end of the year, there should be clear signs of improvement because youngsters pressed into action should no longer be considered green. Ultimately, the money committed to guaranteed contracts says that we're likely headed to another year of without drastic staff changes. We should have been better than this. More football savvy minds tell me that Franklin and Buh know what they're doing. I hope so. Beyond X's and O's, I have a sinking suspicion that our talent evaluation and teaching ability are suspect.

Perspective-wise, this is 30+ years of Cal fandom and we've been here before. Our university is unique and it's something to be proud of. It may mean that our athletic teams work under certain disadvantages. But it also means that our successes are to be treasured. We'll get there again. For those of you who have continued to read this column throughout this dismal year, I have no words. You may need help. I certainly do. But I salute you. And give thanks. Our time will come and those of you who remained faithful will have something that the naysayers and the bandwagoners can never realize. Rallying round her banner. We shall never fail. California. Alma mater. Hail. Hail. Hail!