The Bears and Cardinal renew their storied rivalry today. Cal (a 31-1/2 point underdog) will try to pull off the biggest upset in Big Game history.

There is not much that needs to be said about this one. Today's game provides Cal with its only hope (albeit a slim one) of giving some semblance of positive spin to a season that otherwise been a nightmare. If you dreamed up a worst-case scenario for the 2013 season, this was probably it. Or maybe this is worse. Heck, even Ted Miller's worst case scenario before the season had us beating Colorado. (Sigh.) But hey, it could be worse. At least Stanford is probably not going to win the national championship and Coach David Shaw won't win a Nobel Prize. (I am pretty sure of both those things.)

Does Cal have a chance to bring the Axe home today? Let's be realistic: probably not, unless Stanford gives the Bears a lot of help with turnovers, mental mistakes, and overconfidence. These are college kids on the field, after all, so I suppose anything is possible. We all know the Big Game has produced scenarios of unlikely victory when it seemed all hope was lost. But we should prepare ourselves for the inevitable: Stanford is really really good and Cal is really really bad. 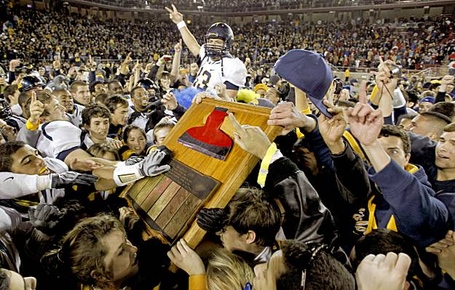 In my own mind, the best I've convinced myself of hoping for is a reverse of the 109th Big Game in 2006. That year, Cal was 8-3, nationally ranked, and coming off two straight losses that knocked the Bears out of the Rose Bowl picture; Stanford entered the 2006 Big Game 1-10 and Walt Harris was all but fired as Cardinal coach. The Bears were the vastly superior team and were heavy favorites to retain the Axe without breaking a sweat. But Stanford, to its credit, fought valiantly, playing perhaps the best it was capable of playing. Stanford's rising to the occasion, combined with a Cal offense that seemed to sleepwalk through the game, made for a game that was closer than we expected. In fact, Stanford had a chance to take the lead in the fourth quarter when Marshawn Lynch fumbled deep in Cal territory. Luckily for Cal, however, Stanford had one more derp left in them in 2006: three ineffective offensive plays and a missed field goal left the Bears unscathed. Cal went on to win that day 26-17 to capture its fifth straight win in the series (and win a share of the Pac-10 championship when UCLA upset USC later that day), but Stanford had made the game too close for comfort. What Cal fans hoped would be a beatdown to take the sting out of being eliminated from Rose Bowl contention had been anything but.

Maybe Cal can rise to the occasion like that today and keep the Bears competitive today. In a lost season of futility, that would be a welcome victory short of victory.

This is your pregame open thread. Discuss all your Big Game memories here. And talk about today's game if you want. Watch for the link to the first quarter thread as the 1:00 PT kickoff time draws near.