One month ago no one would have predicted that Stanford could both beat Oregon and lose to USC, but that is exactly what has transpired over the last couple weeks. GIFs of both games follow...

Share All sharing options for: Scouting Stanford 2013 - Rest of the Pac Breakdown

The formula for beating Stanford was established by Utah earlier this season and last week USC provided the proof. Utah's theorem went something like this:

USC's proof was a little different:

Stanford lost last week so according to these equations Cal is dooo... wait a sec. Since when do we trust USC's math? The Oracle at Delphi was wrong and so were the Trojans. This is The Big Game and anything can happen. Lets take a look at what went into that second equation:

(Quick viewing note: since there are two different games depicted below the uniform colors are not uniform. Hint - Stanford always has white pants while USC and Oregon wear shades of yellow)

Heading into the USC game Ty Montgomery led the nation in kick off return yardage.

Montgomery, #7, has fielded the kick. The Oregon players are running down the field "in their lanes" while Stanford has formed the legally acceptable 3 man blocking formation (since the wedge is apparently too dangerous - although by definition the blocking below appears illegal). 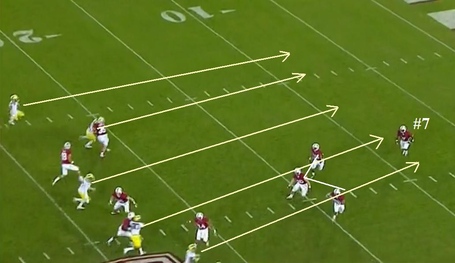 The Ducks are quickly blocked out of their lanes and the breakdown allows Montgomery a large hole up the middle. 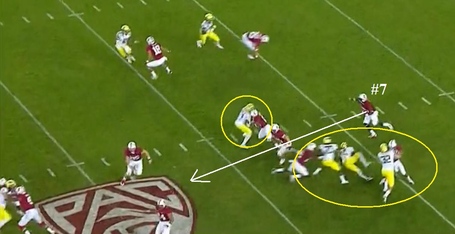 Plenty more blockers make this a big return and if not for the kicker it would be a touchdown. (The frame rate for for my GIFs look off, sorry, don't know why that happened as I used the same settings as last week).

Cal has had breakdowns on special teams. That cannot happen on kickoffs (and Cal needs lots of kickoffs).

The most important player on Offense for LS Junior University is #25 Tyler Gaffney, he averages 23.5 attempts for 120 yards per game. He has 16 of Furd's 33 touchdowns this year. David Shaw's game plan is to run the ball with Gaffney and then run it some more and follow up with more running. Of 640 offensive plays, 418 were runs and 235 of those were Gaffney's, 38% of the time Gaffney is going to have the ball. A big powerful runner, Gaffney is predictably difficult to bring down but he has the ability to find and squeeze through holes.

USC put 8 men in the box to stop the Furd running game. Sometimes it worked...

But on the next play Stanford just handed to Gaffney again and all those defenders didn't matter.

With all their inside run tendency, Stanford sets up the defense for the occasional outside run. Look how there is no one lined up outside on the 2nd level. The lead blocker takes the last man on the line of scrimmage and it is off to the races.

If you have watched The Drive this year you have heard both ASU and Cal coaches yelling "Play through the whistle!" and this next play shows why. USC stops Gaffney cold on a short yardage run, and the defenders stand up and start to walk around but Gaffney has not gone down, has not stopped fighting and the referee has not blown his whistle. Gaffney breaks out and gets outside showing just enough speed for a touchdown.

David Shaw rarely calls for play action or misdirection which is why it often works. Once during the Oregon game and once during the USC game quarterback Kevin Hogan, #8, kept the ball on a zone read. Hogan's 60% completion percentage is ok but his 172 yards per gamepassing is anemic. His value comes from his ability to run and he is the second leading rusher on the team (even after you take away yards lost to sacks).

In addition to the zone read Furd will occasionally call for play action. Here the tight end on the right fakes a block and sneaks out on a short route for a 5 yard gain.

Montgomery is not the most important play on offense but he is the most explosive. He leads the team in all purpose yardage and receiving yardage and in 4th in rushing yardage. He averages 4.5 receptions a game so Shaw will look for creative ways to get the ball into his hands.

This is a play action pass and though Oregon has 3 defenders around him, none are close enough to stop the reception and first down. Notice how #21 the safety gets drawn in towards the line of scrimmage, then has to recover to get Montgomery out of bounds.

A play from Oregon State's playbook, the Jet Sweep, #7 Montgomery is the man in motion.

And a Reverse against USC.

Both Oregon and USC managed to keep Montgomery bottled up which led to low scoring games. Cal will have to follow that strategy to succeed.

Stanford was ready for the play below. The defense sells out on the Jet Sweep, dropping the safety deep in case it really is a pass and blitzing the corner into the backfield. De'Anthony Thomas has absoultly no where to go...

You can be sure that Stanford will be adequately prepared for Cal's limited playbook. Time to bust out all the counter-tendency plays; no more games to save them for.

Here #11 Skov comes on his favorite blitz, timing the snap right at the center. The Oregon line picks him up but the distraction allows #43 Blake Lueders (senior LB) and #90 Josh Mauro (5th year senior DE) into the backfield to make a play before the running back can take 2 steps with the ball.

Even the elusive Marcus Mariota was unable to escape the Furd front seven's pressure.

Lest you think pressure always comes from #11, #17 Tarpley will come on a blitz as well.

Both times Skov headed directly for the Oregon running back, I suspect this was planned. Against Cal I would expect him to go for Goff instead. The easy counter to this blitz would be a changed snap count but I'm not sure that Cal has one in its repertoire. If we have anyone who can physically play center when we reach the goal line it will be a major accomplishment so the offense may not have the ability to go on two...

How did USC combat the pressure from the Stanford defense?

Well, USC's tendency towards max protection led to many plays where Stanford only rushed 4 or sometimes even 3 down linemen dropping 7 or 8 into coverage. Even with limited rushers, Furd managed to get pressure on USC Quarterback Cody Kessler. It was Kessler's ability to move in the pocket and even out of the pocket which kept plays alive. Having Nelson Agholor as a receiver helped too.

And that other guy Marqise Lee also made his presence known (as well as his intention to enter the NFL draft with every two toe touch reception).

This is what an experienced defense looks like. I have no idea how David Shaw will replace so many key seniors but for the next 3 games he has a luxury that no Bear fan has seen around these parts lately.

Goff is not going to have a lot of time to throw but Harper, Treggs and Lawler have the hands and skill to be as good as Lee and Agholor. The key will be to keep the play alive long enough for one to get open. Goff is going to have to move in the pocket and not throw the ball at a receiver's feet if he gets pressure. The receivers are going to have to make tough catches and not look around like they had no clue the ball could possible be thrown to them.

Stanford showed that time of possession does matter against Oregon as long as the Ducks aren't scoring touchdowns on every possession. Time of possession will be crucial for Cal. This season has been marked by short offensive possessions followed by long defensive stands. The Cal defense cannot afford to be out on the field against the Furd running attack for more than 30 minutes (they simply don't have the healthy bodies needed for that). The Cal offense must put together sustained drives with points. Punts and turnovers will spell doom for the Golden Bears and I fear for some coaches as well (who, through the window of The Drive, I have come to like and respect).

Liffey, where are the play breakdowns? My ambition was greater than my time. 20 GIFs from two games made it into the post and I wanted even more (and the Utah game to boot). Thank you for your support, comments and contributions throughout the season. It has been a tough and long one where we have all learned how to be an Old Blue.