A Golden Spotlight on Cal vs. Colorado

My first response at the conclusion of this game was that I wanted to immediately erase the film and move on with my life. There were plenty of snarky intros that came to mind along the vein of "at least we didn't lose to the worst team in the Pac-12."

Share All sharing options for: A Golden Spotlight on Cal vs. Colorado

But whatever doubts one might have about our current coaching staff, it's clear that many of the players still care and are hurting worse than we fans. With that in mind, abject disappointment is no reason to bail on our guys; this is precisely when they need our support the most. We knew this would be a rough year. But that's the very definition of a re-build. It may very well be that we do not have the leadership in place to take us where we want to be. However, blowing things up and lopping off heads after a single year will marginalize the lumps we took this season. Experience and continuity are key building blocks to success. We don't want our players to give up after facing adversity. Should Cal fans be held to a lesser standard?

It's third and long. Cal comes out with an atypical 3-3-5 formation. Moala(#55) is at nose with Lopa(#75) and Campo(#43) at end. Whitener(#25) is an OLB who comes up on the line. Lowe(#5) comes up from his safety spot to take a spot in the middle of the remaining LBs. Besides the different personnel, Whitener, Lopa, and Moala are bunched on the line to the weak side of the formation while Campo is by himself on the opposite side. Colorado goes empty in the backfield, but has two tight ends. 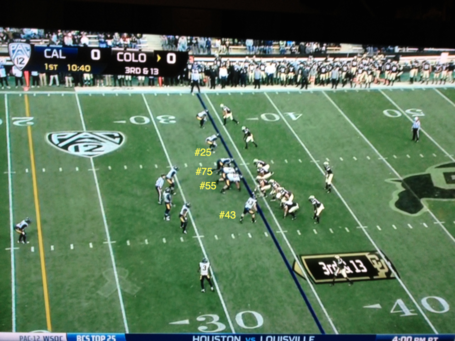 Right before the snap, Moala stands and shifts to an upright pass-rushing position. He changes position to attack the strongside A gap. 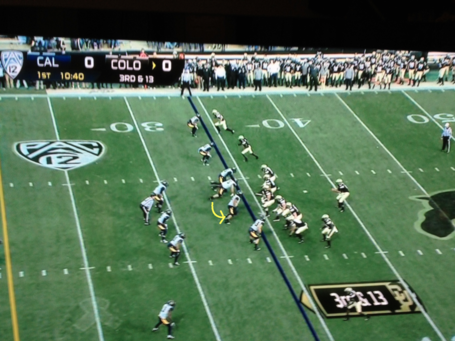 Colorado keeps both tight ends in as a max protect package. It should be 7 blockers against 4 pass rushers. But Cal's unusual alignment has confused their blocking scheme. Lopa(#75) and Campo(#43) draw double teams. But that leaves Whitener(#25) with just one blocker to beat on the edge and Moala is soloed up against their strongside guard. Lowe(#5) and Barton(#8) remain underneath in case their tight ends leak out. 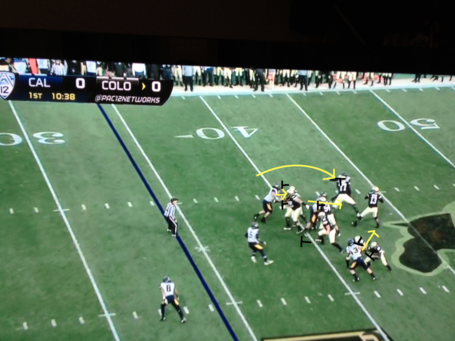 Both Whitener(#25) and Moala(#55) are able to beat their respective blockers to get pressure on the Buffalo QB. They force an early and errant throw. In this case, Cal's scheme allowed them to both play coverage while also applying pressure. 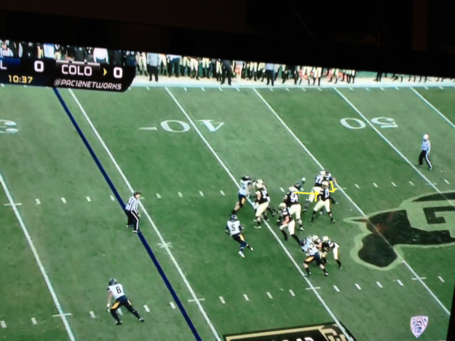 It's another key third down. Cal is in their standard 4-3 under front with Jefferson(#7) up on the line opposite the Buffalo tight end. Colorado is in 11 personnel, one back and one tight end. 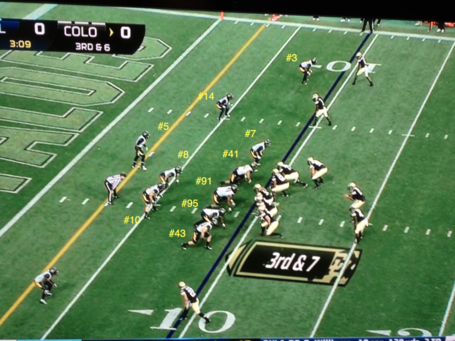 At the snap, both Barton (#8) and Jefferson(#7) blitz. The Colorado tight end leaks out, but Lowe quickly shifts over to cover him. With the Buffalo tailback staying in the pass protect, it's six blockers against six pass rushers. 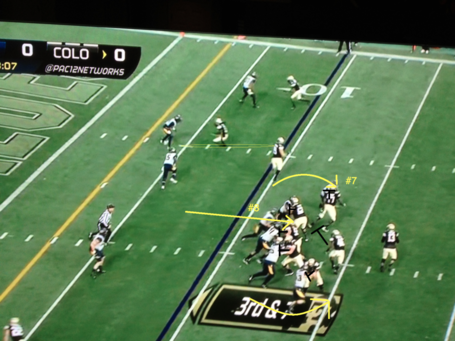 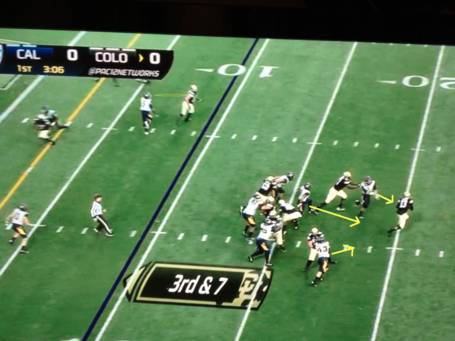 The Bear pass rush converges on the Colorado QB and forces him to throw it away. It's a good call with better execution that results in a key stop. 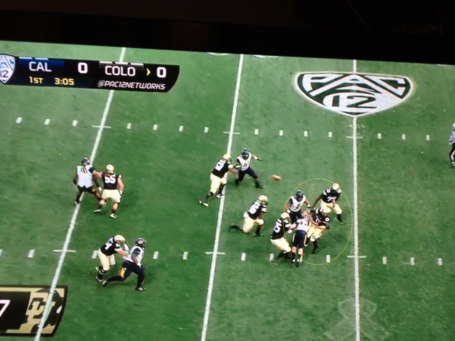 It's another critical 3rd down with the Bears desperately trying to stay in this one. Colorado goes 4WR and 1TB. Cal counters with their standard 4-3 under front, Jefferson(#7) up on the line. 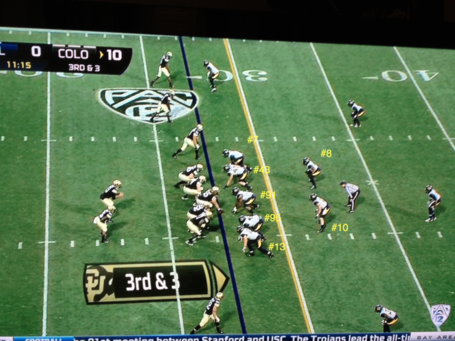 At the snap, it's the dreaded zone read. Cal really hasn't stopped this play all year. Or last year. Or the year before. Or...you get the idea. On the playside, Jefferson(#7) is unblocked and read. Colorado also leaves Cal's backside DE, Kragen(#13) unblocked. This allows their guard, #52, to pull. 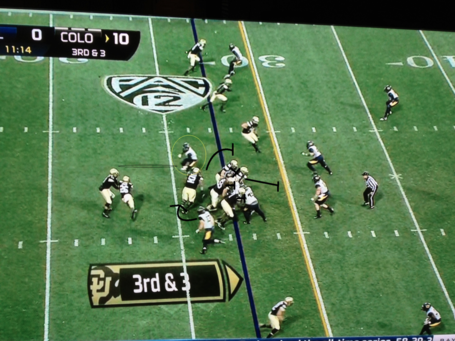 It looks like Cal is running a scrape exchange with Jefferson(#7) assigned to crash on the tailback while Barton(#8) assumes responsibility for the QB. But Colorado is running a clever variant of the zone bluff; they're using their pulling guard(#52) in an arc block to take out Barton. Because their tackle(#54) ignored Jefferson, he's free to lumber downfield to the 2nd level. 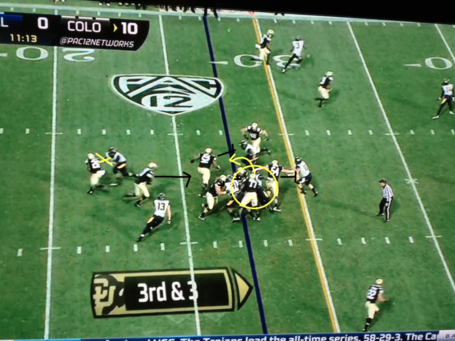 This play should have gone for big yardage. The Colorado guard(#52) pulls around and engulfs Barton(#8). Their tackle(#54) is leveling Lucas King(#10). Meanwhile, their center and guard are double-teaming Coleman.(#91) It's wide open for the Colorado QB up the middle...Except Jacobi Hunter refuses to be blocked.

Hunter fights his way all the way past the scrum in the middle to meet the Colorado QB in the hole and stops him short of the 1st down. It's a great play by a true freshman. 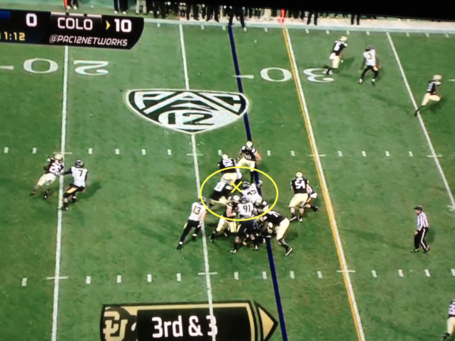 Needing to counterpunch, Cal comes out with their 4WR, 1 TB spread. Colorado is in a nickel defense. They have SIX men in the box, so naturally, IT'S IMPOSSIBLE TO RUN THE BALL. 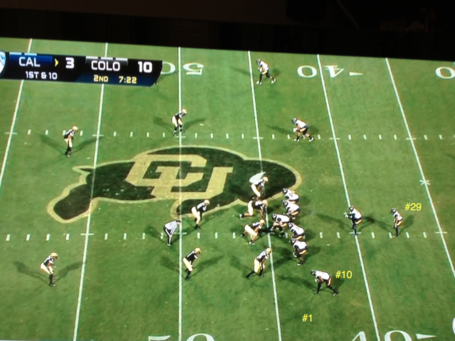 Undaunted, Cal boldly hands it off to Muhammad.(#29) Goff continues with the fake tunnel screen which forces the CU safety to pause for a second. Meanwhile, Crosthwaite(#71) pulls to take out their end while Borrayo(#66), Rigsbee(#73) and Moore(#64) all block towards the top. Okafor(#76) moves forward to pick up one LB while Powe(#10) cracks down on their other LB. 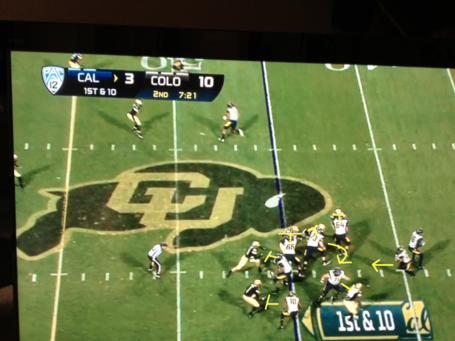 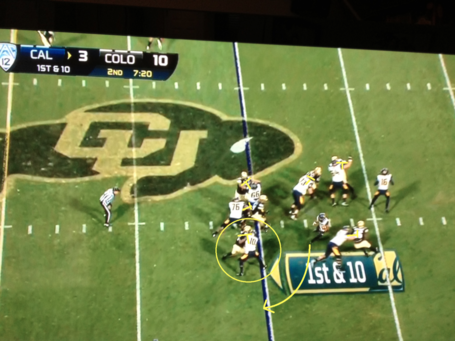 ...and then Treggs(#1) takes out their corner. Muhammad turns on the jets and tries to out-run their pursuit. 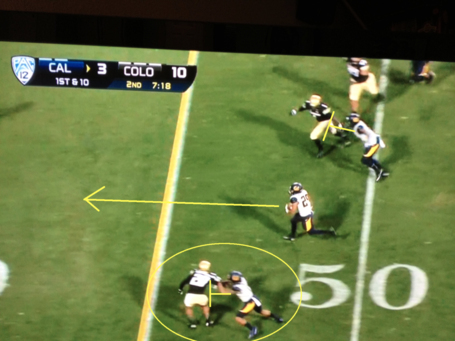 The Colorado safety has an angle and hits Muhammad at the 5 yard line...but Muhammad refuses to go down and dives forward for a Cal touchdown. It was a simple play, but well-executed. Finally, we manage to get one of our speedy backs free on the edge for a big play. 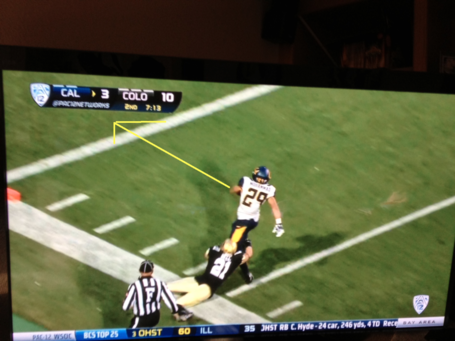 So, there's a chance that this entire season was an extremely clever plan to lull Stanfurd into a false sense of security for the upcoming Big Game. Crazy? Like a fox. Or whatever the fox says. All manner of sins will be forgiven and forgotten if we bring home the Axe. I'll freely admit...the chances are not very good. But can you think of a better way to end this nightmarish season? Go Bears!