Coming in with a rare two game losing streak, Cal Women's Basketball was determined to right the ship and get back to Berkeley with a DC split after being upset by George Washington on Friday night. 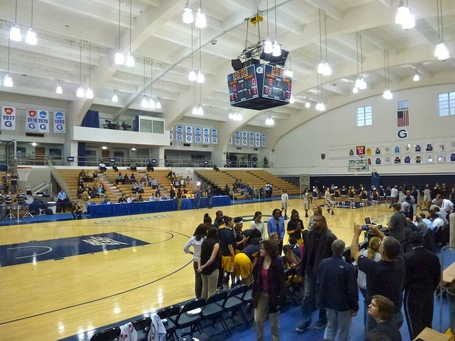 With post players Gennifer Brandon and Justine Hartman both still unavailable for the game, the Bears (2-2) used quick hands and great ball awareness to steal this victory against the Georgetown Hoyas (1-2). Bears were actuatlly outshot (38.6% for Georgetown to 35.5% for Cal) and out rebounded (41 for Georgetown and 31 for Cal), but had a significant edge in turnovers (10 for Cal, 28 for Georgetown) thanks to a huge edge in steals (16 for the Bears, including 9 for Brittany Boyd, as to 3 for the Hoyas).

In fact, Brittany Boyd had a very solid line of 9 points, 6 boards, 6 assists, and 9 steals (just one short of her Cal record set last year against UCLA). With the old school McDonough gym, there was no scoreboard with the players' stats. I don't know if the team was that aware of how close Boyd was to a triple-double (I sure wasn't as a spectator). Boyd drove through the Georgetown D like a wrecking ball on multiple occasions. Her aggressiveness was quite effective in drawing fouls (though she was only able to make just 3 of 7 from the charity stripe) but also led to some hard contact with the floor. Boyd sat out part of the second half after one particularly hard fall, but was able to come back later into the game and stay effective.

Bears broke things open with a 19-4 run in the first half. With all the Hoyas turnovers forced by the team, the Bears scored 40 points off the 28 turnovers. Cal took a 34-24 lead into the second half. Unlike on Friday, the Bears were able to avoid an early second half run by the opponent. Although Georgetown was able to get on a few mini-runs, the closest margin that they got late was merely 14 points, with 3:30 left in the game.

Rashanda Gray was again the scoring leader for the Bears, finishing with 15 points on 6 of 8 shooting before fouling out. Freshman Mercedes Jefflo chipped in 14 points, including some early baskets in the game, with two 3-pointers made. Also scoring in double figures was Afure Jemerigbe with 13 and freshman Hind Ben Abdelkader with 10 (including two baskets from 3 point land).

For Georgetown, Natalie Butler led all scorers with 16 points as well as 15 boards and Katie McCormick had 14 points. No Hoya player tried throwing a shoe to defend the ball, however.

Here is your final score: 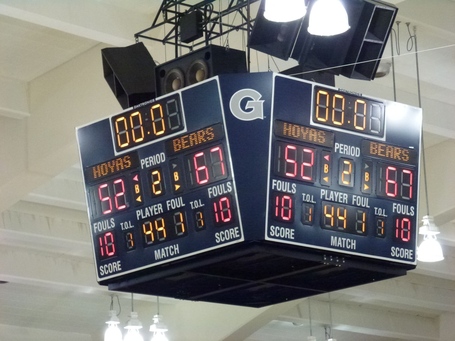 A decent Cal crowd showed up for the game.

I'm particularly fine with how you can only sort of see my Cal Baseball cap in that photo.

Here is another picture of the Cal crowd (I wasn't as successful as the Fox Sports 1 camera guy in getting the crowd to cheer for the camera). 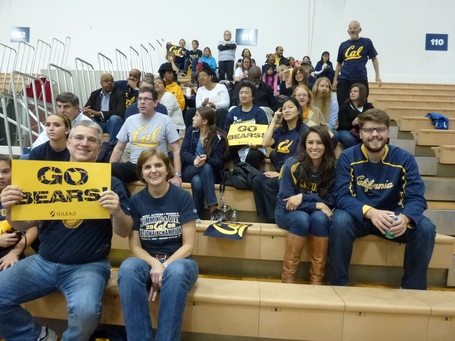 Coach Gottlieb also got to meet former Georgetown Men's Coach and Basketball Hall of Famer John Thompson after the game.

It was a thrill for me to meet John Thompson after game. Grew up watching Big East hoops. I was nervous and he said he knew who I was...OMG! 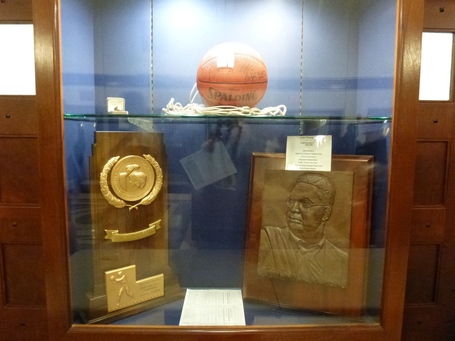 Up Next: Bears will host the Northwestern Wildcats next Sunday (game is on the Pac-12 Networks). In late December, the Bears will actually make another trip to the East Coast to face No.1 UConn in New York City (at Madison Square Garden as a part of the Maggie Dixon Classic along with St. John vs. Texas A&M).