When you are coming off a Final Four appearance and have a top 10 ranking, teams are going to give you their bests. Bears faced the best of George Washington Colonials on Friday night and fell short in the first road game of the 2013-14 season.

Share All sharing options for: Growing pain for Cal Women's Basketball in a tough road loss at George Washington 75-72

Chalk this one up as growing pain.

No.10/11 Cal Women's Basketball (1-2) traveled 2400 miles (as a crow flies) to Washington, DC and found themselves as huge targets in the midst of a raucous White Out on Friday night. Given a top 10 ranking and how the team just went to the Women's Final Four, George Washington Colonials (2-0) brought their "A-game" to the Charles E. Smith Center in a bid to pull off a major upset.

Sadly, similar to many other results involving the Golden Bears playing in Eastern Time Zone, the Bears suffered a narrow 3 point loss, 75-72, in their first road game of the season. To give credit to Coach Lindsey Gottlieb, Coach G did pull an anti-Tedford by having the team in town by Wednesday night. The team got the chance to have a normal day of school work at hotel, practice, and a late night monument tour on Thursday to adjust to being on the East Coast.

Our first stop of our D.C. trip is to the Lincoln Memorial. pic.twitter.com/BQnCx7f3z5

Not helping the matter for the Bears, Gennifer Brandon, a preseason candidate on the Wooden Award Top 30 List and the Wade Trophy Watch List, was not available for the Bears, despite she had made the trip to DC and was dressed for the game. Without the presence of Brandon inside the post, Cal had to rely much more on freshman forward Courtney Range.

Despite a sloppy performance for long stretches of the game and a career night for the George Washington's leading scorer, the Bears were few plays away from earning their first road victory of the season. A couple of late offensive foul calls (the second one looked particularly questionable, but it really should not have to come to that) on Courtney Range denied the Bears of a chance to take (and make) the winning shot.

The star for the Bears was forward Reshanda Gray and her 24 points (an amazing 10 of 14) and 8 boards. Gray was able to dominate inside the paint and basically score at will (provided that the Bears could have gotten her the ball without a turnover...at least a couple of times it was a 3 second in the paint call).

Even without Gennifer Brandon and Justine Hartman (game note said it was due to illness...I don't think it was due to the late night monument tour...or meeting the Cal DC alumni group), the Bears still managed to outrebound the Colonial by a wide margin 50 to 39. In a fast pace game, the Bears used their size to have the edge in offensive boards (20-14). Part of the reason why the Bears got so many offensive board, however, had to do with how the Bears have yet another under 40% Field Goal percentage shooting game. The game was a close affair in the first half until the Bears went a short run late in the half to have 41-34 lead at the half.

The Colonials came out playing much better than the Bears to turn things around. Cal cannot avoid making turnovers to start the second half to allow the George Washington to take the lead on the strength of a 9-2 round. In the last 10 minutes, the Colonials went on another run to build up an 8 point lead at 61-53 with 7:40 left.

Bears woke up right at this moment, however, as point guard Brittany Boyd (Cal's other Wooden Award and Wade Trophy Watch Lister) took over the game. Boyd, a double-double with 17 points and 11 boards, had the basket or the assist on few buckets in a row that gave the Bears a late lead.

GW would not go away, however. Key baskets made by Nipe and guard Danni Jackson gave the Colonials an one point lead late in the game. In a somewhat unexpected dogfight late in the game, Bears made too many turnovers to close completely the gap. A couple of key free throw misses by GW (I think few of us Cal fans at the game would like to take a little bit of credit for that) did allow the Bears to possibly take the lead or tie the game. That's when the fatal offensive foul calls occurred to stop all momentum.

Nevertheless, down only 3 points with less than 10 seconds left, the Bears got two tries to get the late equalizer. Unfortunately, neither Brittay Boyd nor Afure ("Fu") Jemerigbe (after yet another Cal offensive board), 12 points for the game but somewhat quiet after scoring the first two Cal buckets, could hit that.

Now we get to the scrapbooking part of this recap (since it is kind of a rare occasion for our DC Cal alumni to see the Women's Basketball team in action).

Teams ready for the tipoff: 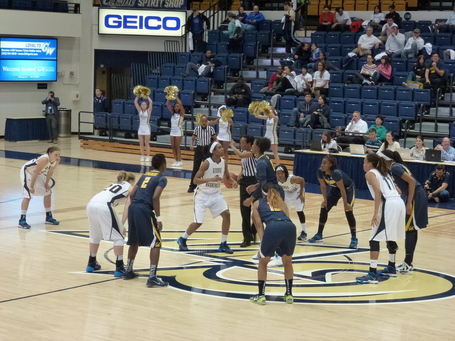 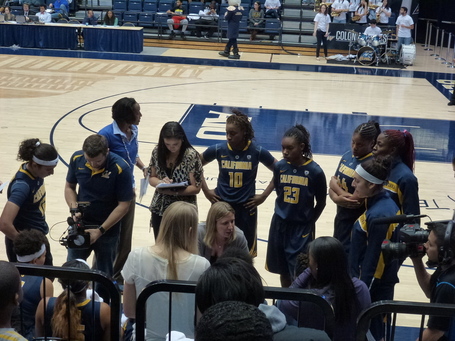 Maybe this is similar to men's coach Mike Montgomery giving the team some alone time during the half, in most timeout situation, the coaches will talk amongst themselves to leave the players themselves to rest and/or fire each other up. Then Coach Gottlieb

The unfortunate result (but at least the GW team were really really happy about being able to beat the Bears): 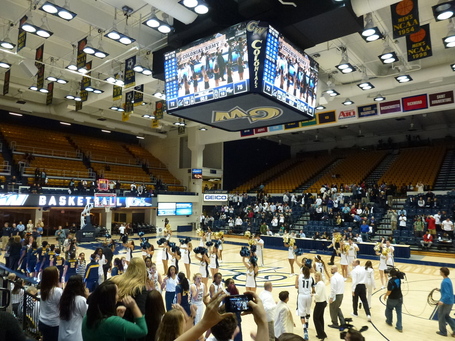 The Bears take on the Georgetown Hoyas on Sunday afternoon 12 pm PT. Last time when the Hoyas played at home, this happened:

Who knows what would happen this time around (hopefully an easy Cal victory)?

Random Fact That is Sort of Related to the Game:

My friend @GWCoachTsip had his team ready and boy did they play. We can and will learn, get better, and bounce back. Only choice.

I fully expect the Bears to be ready and bounce back in a big way on Sunday, snapping this two game losing streak.