Two teams with no where to go but up meet in Boulder, CO. Will a an examination of the Colorado Buffaloes lead to hope or despair for the Golden Bear faithful? GIFs and Breakdowns.

Share All sharing options for: Scouting Colorado 2013 - Bottom of the Pac Breakdown

Cal and Colorado face off in Boulder to determine who can claim the title of worst in the Pac-12.  Bears fans know it, have watched the story, the Cal football team is freshman territory.  This isn't because of a multitude of freakish players like Myles Jack, it is because without fielding freshmen, Sonny Dykes could not field a team.  In a few years the Golden Bears will have one of the most experienced, tail-kicking teams in the country or a team of guys on disability.

The once proud Colorado Buffaloes have also fallen on hard times.  After a one-win season, the Buffs fired second year head coach Jon Embree and brought in former San Jose State Coach Mike MacIntyre.  Superficially CU is has a better record with 3 wins so far this season, but those wins are over two FCS teams and 5-5 Colorado State.  A better comparison of Cal and Colorado can be seen in their Pac-12 only stats:

I am unsure how these two teams will each score fewer than 20 points on offense but give up over 45 points on defense Saturday but it is sure to be an entertaining experiment (the best of Ralphie "When I grow up I want to go to Bovine University").

It would be a mistake to regard Colorado as a team lacking talent or coaching.  Much like Cal there are outstanding performers, it just rarely comes together for them as a team.  I will show it is actually worth while to look at what happened during the Washington-Colorado game (despite the score differential).

Paul Richardson is a familiar terror in the Bay Area.  This year he is the entire Buffalo offense scoring 9 of 22 (40%) touchdowns, catching 60 of 171 (35%) passes for 1060 of 2164 (49%) total passing yards.  So my math in the header of this section was off, Richardson is ONLY 40% of the scoring offense and 50% of the passing game for Colorado.  Against Washington last weekend Richardson scored the only points of the game for CU on the following scoring play, ON A BUM ANKLE:

Reminiscent of Austin Seferian-Jenkins on one leg in Berkeley last year...  PTS-JD nightmares still haunt me...

Lets take a closer look at how Colorado's only real offensive highlight came about.

Paul Richardson is #6 at the top of the screen.  Colorado in in a Pistol formation with the tight end lined up tight right and two receivers wide left.  Washington has their base 4-3 hybrid Shaq-Nickel package on defense.  Moments before the snap Richardson goes in motion... 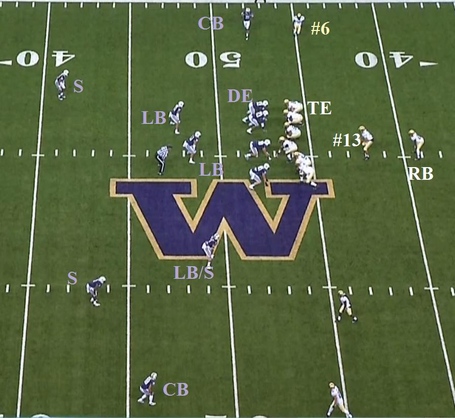 Colorado runs a man beater pattern to the left while Richardson runs a pattern that burns the zone defense that the Huskies employ.  The labeled Defensive End gets blocked by three players which provides more than enough time for quarterback #13 Sefo Liufau to find his best/only weapon. 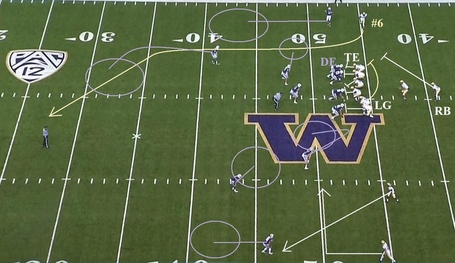 One on one with the only deep safety who just is not deep enough.  Not even the wide angle camera can keep up.

Richardson put his speed on display before injuring his ankle earlier in the year.  This time against Arizona Colorado has #6 wide right once again with 2/3 of a diamond formation, a tight end tight left and a receiver wide left.

Colorado has a max protect scheme called against what looks like a blitz from a 4-3 Wildcat defense.  Notice the depth of the safeties?  Offensive Coordinator Brian Lindgren sure did... 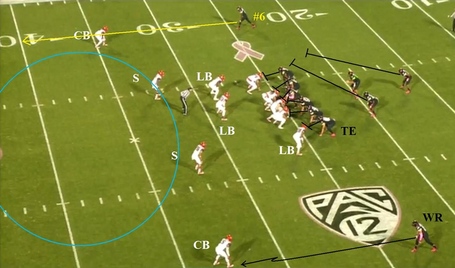 Richardson runs a twenty yard Post Route while the other receiver runs a double hitch route.  With no safeties in the middle of the field, Richardson takes one step towards the sideline and cuts hard in on his post getting the angle he needs in front of the corner back.

The rest looks awfully similar to the result against UW.

A word of caution for Andy Buh, do not leave the deep middle devoid of safeties when Richardson is in the game (especially when lined up on the right by himself).  Actually, just triple cover Richardson all day.

The other 50% of the Buffalo Offense

Their mascot is technically a Bison but offensive is no misnomer for what happens when Colorado possess the ball and Richardson is not in the game.  Unfortunately, offensive does not mean totally hapless, and there were some impressive efforts on display in the first half of the route in Seattle.

I liked this screen for a couple of reasons, primarily because it was CU's first 1st down of the game (and I feared at the time it could be their only one, but no they actually accumulated 15 first downs).  Called on 3rd and 6, this play appears to be one that could break for a big gain.

The blocking call was better than the execution but running back #26 Tony Jones showed the ability to run through contact and pick up extra yardage.

In the scheme of the entire game this was a little thing: these effort plays are the ones that can lead to success.

This next play is another example of effort.  Freshman quarterback, Sefo Liufau, grabbed the starting job against ASU and never looked back.  He is elusive and has a live arm, both of which are on display below:

Colorado was in this game until 3 and a half minutes until half time when UW scored 2 touchdowns before heading into the locker room.  The game broke into a total rout after 2 Liufau interceptions (one that went 84 yards for a touchdown) and a funble that was returned 53 yards for a touchdown.

Colorado played tough but inconsistent defense.  This is not a fast unit, they are vulnerable to the deep pass, though there are individual players with speed.  The defense is aggressive bringing quite a few blitzes and the players swarm to the ball.

The player who really stood out against the Huskies was #13 Senior Safety Parker Orms.  He showed an ability to diagnose the run and managed to stop Bishop Sankey several times for no gain.

Sankey is #25.  Orms crashes the run so quickly that the receiver who is assigned to block him is unable to get there. 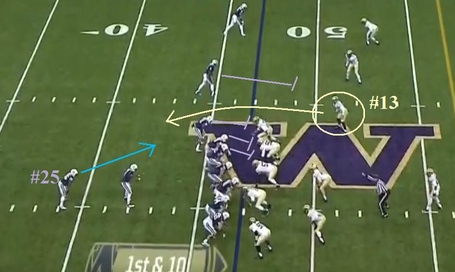 Sankey makes a lateral move in the backfield but Orms gets a shoestring.

This run is designed to have 2 pulling linemen ar lead blockers and ASJ sealing the end of the line of scrimmage. 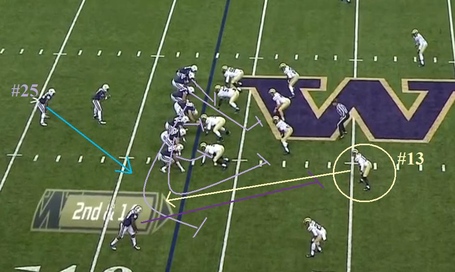 Orms beats the wide receiver's block and the center's block to get to Sankey and wrap up his legs. 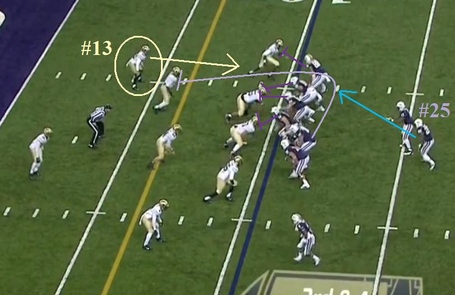 Orms stops the powerful back stone cold at the line of scrimmage.

But this was was one collision too many...  Parker Orms suffered a stinger on this play and though he returned on the next series, the injury clearly bothered him later in the game.

The other impact player on the Buffalo defense is true freshman #44 Addison Gillam.  Gillam leads the team in tackles (77) and sacks (3).  He is fast and has a good football IQ for a freshman.

Here is one of his sacks this year:

Gillam is still a freshman, which Keith Price exploits on this run.

That player who gets run over on the goal line and then clutched his arm... That is Parker Orms after his stinger.

Colorado is a team playing hard regardless of the season stats.  Unlike Cal, who have many contributors who change week to week; Colorado has a few key players who are the foundation of the team.  If Paul Richardson is limited in any way, then the explosiveness of Colorado's offense disappears and they will attempt to grind on the ground.

While the Golden Bears have a legitimate shot to win against the Buffaloes, and I dearly want a victory, I cannot help but feel this season has come down to a single game: The Big Game.  Sonny Dykes, Tony Franklin, Andy Buh and company cannot afford to look past Colorado but I can and I suspect many other Cal fans are.  Two wins in the final two weeks will end the season on a high note and equal last season's record.  Go Bears!