A Golden(sic) Spotlight on Cal vs. USC

That which doesn't kill you, only makes you (X)? It's always darkest right before (Y)? Fill in your answers in the comments. And, please, have fun with it. Because we could all use something to smile about after this past weekend.

Share All sharing options for: A Golden(sic) Spotlight on Cal vs. USC

I did a search for "inspirational quotes never give up." One of the top results was, "Your victory is right around the corner. Never give up." And I was briefly buoyed by a sense that the universe had seen fit to send me a sign of hope. Then, I noticed that the quote was attributed to Nicki Minaj, and I was back to wanting to blow up the Earth.

In a microcosm, that's how it felt to re-watch the game.

Cal is in their typical 4 WR package and go empty by lining up Bigelow(#5) in the slot. 'sc is apparently doing something very clever defensively. I can't quite figure it out. They motion a linebacker up to threaten blitz on the edge and shift a safety slightly outside. However, they're essentially putting extra safety help on the side where Cal only has two receivers, but leaving single coverage on the side where Cal has three receivers. 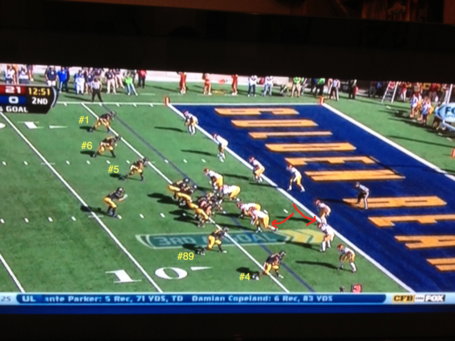 At the snap, Treggs(#1) runs a corner route, Harper(#6) runs a post, and Bigelow(#5) forgets the snap count and stands there for a moment before running a half-hearted stick route. At the bottom, Anderson(#89) runs a post while Lawler(#4) runs a corner. Goff pauses briefly to look off their safeties.

'sc's edge linebacker jumps offsides and is late getting into the pass rush because he's trying to jump back onsides. For whatever reason, 'sc decides to double cover Anderson(#89). This defense makes sense if they were trying to shut down the slant route to Harper or Rodgers...but Anderson? 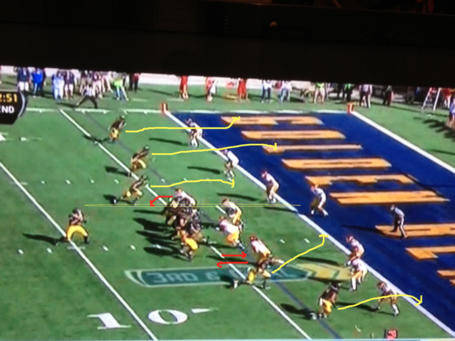 Harper(#6) gets held while Anderson(#89) gets blatantly mugged. Meanwhile, Okafor is struggling to slow down their defensive end... 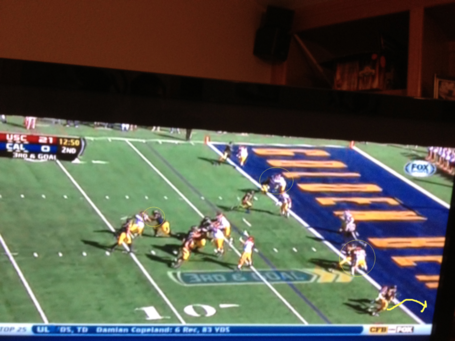 ...but Goff gets the ball off and it's a beautiful back-shoulder throw. Lawler shows off fantastic hands and body control with a twisting catch. Touchdown Bears! 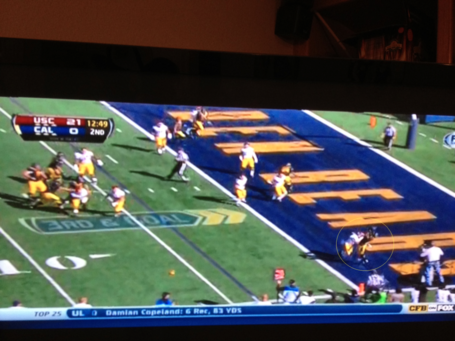 With the offense showing signs of life, the D needs to come up with a big stop. It's a critical third and long with momentum on the line. 'sc comes out with 21 personnel with one tight end on the line and one set back as a wing. Cal counters with their NASCAR package. This is as opposed to the Bumper Car and Beater-on-Cinder-Blocks packages that they employ for most of the game. The defensive tackles have been replaced by standing defensive ends, Kragen(#13) and Campo(#43). Two linebackers, Barton(#8) and Ragin(#4) are lined up at end. 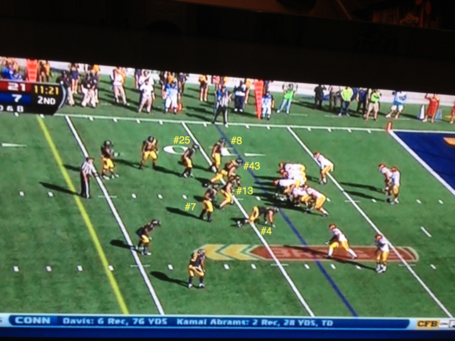 At the snap, Cal rushes six. 'sc keeps one tight end and their tailback in to protect. But, even though the Trojans have 7 blockers for 6 pass rushers, the unusual blitz configuration results in a tight end trying to check Whitener(#25) while their tailback has to block Ragin(#4). Lowe(#5) steps up to pick up the other tight end before he runs free down the seam. 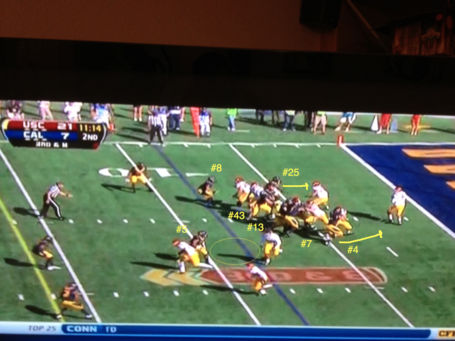 Whitener(#25) and Ragin(#4) beat their guys and put pressure on Kessler. Whitener can't quite bring him down, but forces him to pull the ball down and flushes him towards the sideline... 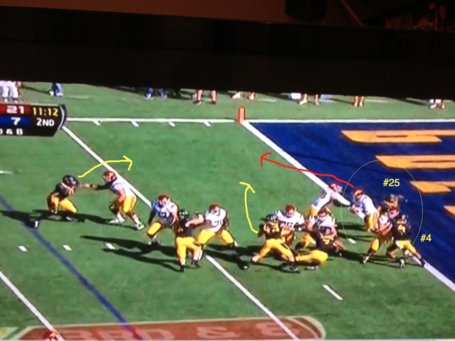 ...where Barton(#8) and Campo(#43) are relentless and finally beat their guys to knock Kessler down. If not for one or two or six little plays that didn't go our way, this very well could have been a turning point in the game. 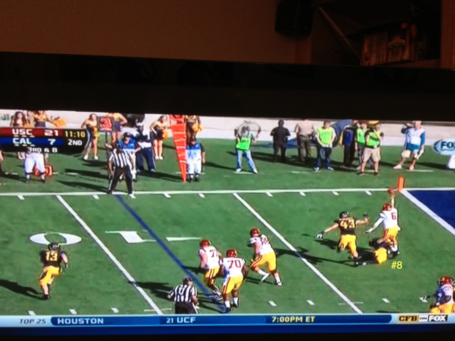 Feeling inspired, the Cal offense comes out with another new wrinkle. Wark(#84) is one the line as a traditional tight end while Lasco(#2) is behind Goff in a Pistol formation. The Trojan DC, Clancy Pendergast, immediately starts screaming. 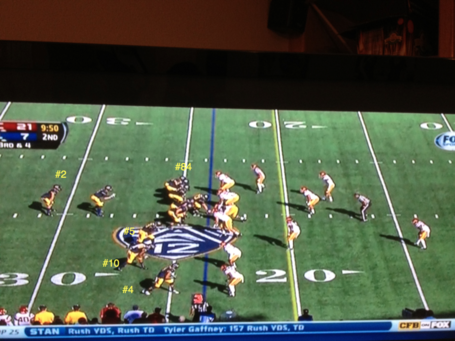 At the snap, the Cal Oline starts drive-blocking towards the strong-side(top). Borray(#66) pulls and looks set to take out the 'sc defensive end. Goff hands off to Lasco and it has all the look of an off-tackle run. Meanwhile, Bigelow(#5) runs a stick route, Powe(#10) runs a deep post, and Lawler(#4) runs a go. 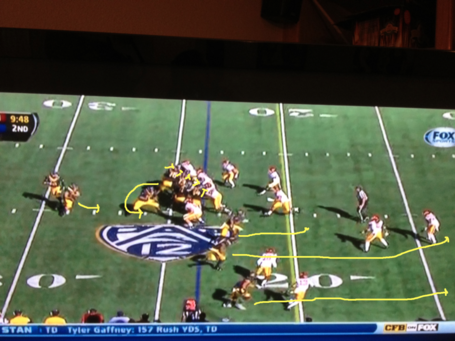 Borrayo(#66) anchors himself instead of continuing to pull through the hole. Cal does this a lot with their pass protection in order to give help on the edge to one of their tackles. Lasco also stops and turns back to Goff. As expected, the Trojan linebackers are flowing to fill their gaps. But, the deep safety also starts moving towards the line of scrimmage... 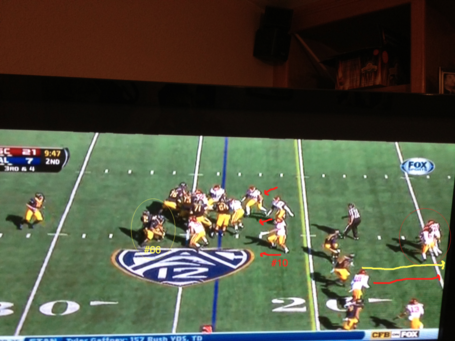 ...and it's a flea flicker! Borrayo(#66) pancakes his man. One of the Trojan linebackers alertly notices the lateral and rushes to hit Goff. But he's too late. 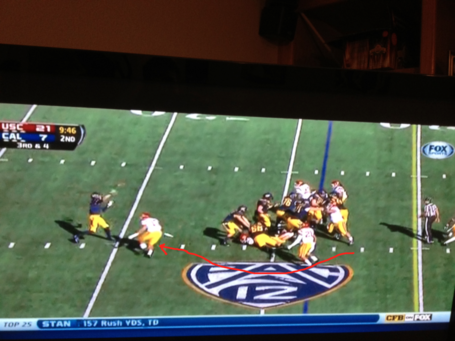 Powe(#10) beats his man with a post pattern. The DB looks like he was expecting safety help to the middle, and the safety was late recovering from the run fake. Goff throws an accurate ball and Powe climbs the ladder for a Touchdown Bears! It's a game again! We could win this one! Maybe this year is our year! Did anyone else's DVR mysteriously freeze at this point? 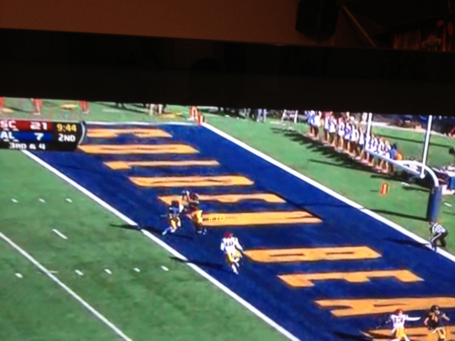 Well, Cal fans. It's come to this. Timmay vs. Jimmay in Boulder for all the Tostito crumbs. Perhaps we'll one day speak fondly of Colorado '13 the way we reminisce over Rutgers '01. Go Bears!