Cal vs. WSU: Notes from the Press Box

The California Golden Bears dropped to 1-4 on the season after an ugly 44-22 loss to the Washington State Cougars. In this week's Notes from the Press Box, let's take a look at some game notes/stats, press conference quotes, and selected tweets & comments.

Share All sharing options for: Cal vs. WSU: Notes from the Press Box

Five turnovers, the inability to finish drives with touchdowns, an ineffective run game, struggles in pass protection, a slow-starting & overmatched defense, and more freak injuries all contributed to the loss.

For more details on the game, check out:

At the postgame press conference, an emotionally-spent head coach Sonny Dykes said what many Cal fans may have been thinking after the game:

This was obviously not a good performance by us; we turned it over five times, including fumbling inside their five-yard-line twice. You are not going to win if you do that, no matter who you play. Right now we are having a very difficult time running the football ... Jared (Goff) had pressure on him all day and got a little rattled because of it. I don't know what to say about the injuries, I've never seen anything like it. We lose at least five or six guys every game; another five or six today. That isn't something we can control; we need to play better. It was a pretty disappointing day.

In response to questions about the opening-drive fumble and the team's performance, he responded:

...The disappointing thing is that if you look at our team against Northwestern and our team now, we haven’t played as [well] as we have in that game since then. Obviously, we have had a lot of personnel injured. I think we had seven guys on defense who started that game who don’t start anymore due to injury. We have several more on offense; our center and right guard are both out. We have no confidence right now, and we are a fragile football team. When you are a fragile football team and you fumble your first possession of the game after putting a decent drive together it takes its toll on you.

...mentioned young team being 'fragile' but took responsibility "gota play better, coach better, that falls on us (as coaches)"

We haven’t done a good job of scoring points in the red zone. We need to get better at it this week. We need to eliminate the turnovers and get better. We need to put this behind us ... keep getting better ... fix the things we’re not very good at and continue to do the things we are good at.

After a game like this our confidence is going to be low. That’s just how it works. A turnover in the red zone will hurt any team. We had two today. It hurt not only our confidence but our rhythm at the time. It’s something we need to eliminate.

There were very few bright spots in the loss; Goff's record-breaking numbers and Chris Harper's career day were among them.  For the first time this year - and not since his freshman season - Harper lined up in the slot at the H receiver position.

Chris Harper lined up at H for the first series, with Kenny Lawler at Z and Bryce Treggs at X

Goff went 35-for-59 with 2 TDs & 1 INT, including an 89-yard TD to Harper for the second-longest pass in Cal history.  Harper's 14 catches for 231 yards were a career high; both marks were good for 3rd on Cal's all-time list in single-game receptions and receiving yardage, respectively.

Several more Bears - all defensive players - were added to the injury list on Saturday:  Kam Jackson (leg/ankle) played sparingly in the 1st half.  Stefan McClure (knee) and Jalen Jefferson (head) were injured in the 1st quarter, and Joel Willis suffered a serious injury on the 2nd half kickoff.

Jefferson's been down for at least 5 minutes of [real] time, already super-thin defense is even thinner now

Kam Jackson (ankle) didn't play in the 2nd half, coaches decision. Played sparingly in the first half. Fortunately, Injury didn't get worse

Fortunately, all signs point to Willis being OK.  Cal's depleted secondary depth, on the other hand, looks very bleak for the rest of the season:

"...Joel Willis is resting at Highland Hospital ... has movement in all his extremities ... expected to be held overnight and released soon"

re DB depth - Walker burned shirt but Cheek & Allensworth were injured before season started, so only 3 healthy CBs left

In light of the injuries, plus our red zone inefficiency & run game ineptitude, and especially the defensive woes, this loss - in which was supposedly a winnable game - was a particularly tough one for Cal fans to take.  And while Jared Goff still ranks third in the nation with 364.2 passing yards per game, the team's overall stats through the first 5 games also paint a very disjointed picture: 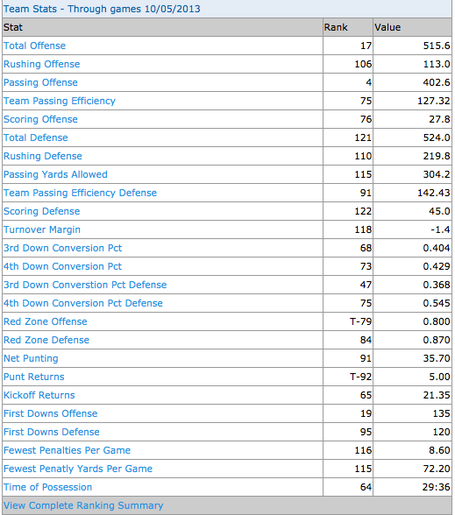 #Cal's D has allowed a TD on every opening drive this season. #WSU's 7-play drive is the longest it's taken for that TD

#Cal has 10 turnovers and 193 penalty yards over the past two games.

The Chronicle's Hunter Hewitt commented on the Bears' struggles and bad luck thus far this season:

3 things we learned from Cal's loss to Washington State http://t.co/fTMf9Wbsd3

The amount of injuries Cal players have sustained this year is unfathomable.

You can try to blame outside factors - artificial field turf, the strength and conditioning program, lack of contact in training camp - but realistically, this is simply a case of bad luck. ...

We're five games into the season, and it's pretty clear. Cal cannot run the football.

The Bears are averaging 113 rushing yards per game and 2.9 yards per carry. Not one running back has topped the 100-yard mark in a game this season. Whenever Cal is in 3rd-and-short, 4th-and-short or redzone situations, it has been unable to rely on its running game. ...

These are scary statistics. The Bears rank 122nd out of 123 FBS teams with 45 points allowed per game. They rank 121st with 524 yards allowed per contest.

WSU indeed beat Cal for the first time since 2002, but some perspective from non-Cal fans may help ease the pain:

Washington State beats Cal for the first time since 2002. Facebook didn't exist in 2002.

And he doesn't even go here! RT @CalStudentSec: Read this, and take @ethannovak's words to heart Cal fans. http://t.co/u6oIH72KEf

...I don't have an exact number on the amount of starters and second stringers you're currently without, but I know the number is absurdly high. There are only two or three programs in the nation that could take that big of a blow and still field a somewhat passable defense. Building off this, the problem doesn't appear to be Buh's defensive scheme. From what I've observed, guys are in the right place, but the lack of experience/instincts/development/take-your-pick has them one step behind at all times. This is typical of teams fielding a defense that has been bombarded with injuries. I'm not saying Buh is a quality defensive coordinator, but I am saying that, as of now, Buh is not the problem. ...

...developing a new quarterback, just like rebuilding, is going to hurt like hell at times. There will be mental lapses and there will be growing pains, but, also like rebuilding, you're going to have to endure it. Goff is going to be a hell of a quarterback. His pocket presence and ability to extend/create plays have impressed me, considering he is playing behind a fairly broken offensive line, and it is scary to think of how much better he'll be after getting a season or two of the ‘Bear Raid' under his belt. ...

My final point is simple: support your team. Whether they'll admit it or not, players take it to heart when they run out to an empty stadium. You, as a fan base, are so much more important to this rebuilding project than you realize. No matter how ugly it gets, show up, stand up, and cheer your [...] heart out. Trust me, you'll be glad you did when this rebuilding project finally turns the corner.