Cal lost to Oregon State 49-17, falling to 1-6 on the season. Here are some selected postgame notes, press conference quotes, and game statistics.

The big story developing from last night is the potential QB controversy:

The Beavers were well on their way to a 49-17 victory when Dykes made the call with 8:31 left in the third quarter to lift starting freshman quarterback Jared Goff in favor of redshirt freshman Zach Kline.

Dykes said there likely will be competition in practice this week, but wasn’t prepared to say which quarterback will start next Saturday at Washington.

Here is a sampling of Coach Dykes' comments from the postgame press conference:

We felt like we needed to make a switch. We put Zach (Kline) in, and I thought he did some good things. He gave us a spark of energy. Moving forward, we’ll see. I don’t know what the answer is. We’ll need to talk about it.

"i dont think we played well on defense or offense" ... no new injuries to report today

"They pretty much lined up and kicked our tails," is the quote of the night from Dykes. #CALvsOSU

Dykes says he thinks they came out of the game injury free. There's the one positive for Cal!

Coach Dykes added that Kline provided a spark off the bench - Zach led the Cal offense on two touchdown drives - but stopped short of naming a starter for next week's game against Washington:

"We put Zach in and I thought he did some good things," Dykes said. "He gave us a little spark of energy."

"We will look at the tape and see how they did," he later added. "We are going to go with the guy who gives us the best chance to win. I was proud of Zach, I thought he came in and did a good job."

another QB question: "all spots are open for competition" but no decision to be made until staff reviews the tape, said Zach did well

In slightly less than a full half of play, Kline went 11 of 16, for 71 yards, 2 TDs and 1 INT. At the postgame presser, he remained positive despite the loss:

Kline: "It's been tough losing, that's always tough. When you lose you see the guys who care."

Kline: "There's gonna be guys that show they wanna be here. I committed here for a reason."

"I wanted to go out there and show the energy I play with, show my leadership. I wanted to show that we have to play for something more than ourselves, more than just the game of football..."

Darren Ervin scored his first career touchdown on a seven-yard pass from Kline. It was Kline’s second passing touchdown of the season. Ervin was Cal’s leading rusher on the night with 11 carries for 40 yards, both career highs.

In the fourth quarter, Kline secured his second touchdown pass of the night, third of his career, to Jacob Wark. The touchdown reception was the first TD in Wark’s career. 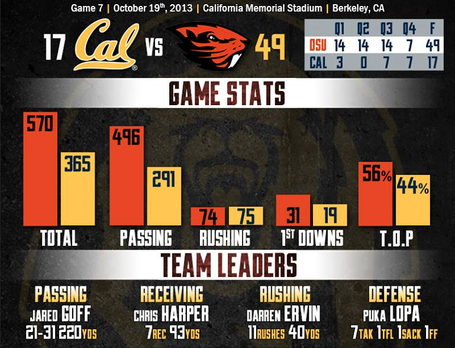 The full stats for the game don't look very promising either. Cal averaged an anemic 2.5 yards per rush, and turned the ball over 4 times. Oregon State QB Sean Mannion was 35-of-45 for 481 yards and 4 TDs, while WR Brandin Cooks logged 13 catches for 232 yards. Per some number-sleuthing by the Chronicle's Hunter Hewitt:

Cal had eight penalties for 100 yards. The Bears entered the game ranked 120th out of 123 FBS teams with 8.57 penalties per game.

And then there's this:

#Cal is on pace to allow the most points in a season in the history of the program... BY THE USC GAME. (HT @veritek)

The recent downward trend is disheartening, but this excerpt from Avi's recap might help ease the pain and keep things in perspective:

When you're trying to build something that's unique and not at all aligned with the way things were, a turnaround can't come instantly. You have to rid yourself of the rot and instill something that will last beyond one season. It might be painful in the short term, but it pays off in huge dividends in the long run.