Mirror, mirror on the wall... why do I see the mad pirate Leach and 22 cougars staring back at me? A look at Washington State using GIFs.

Share All sharing options for: Scouting Washington State 2013- Rest of the Pac Breakdown

To start the season Washington State and Cal could not seem more different. WSU is 3-2 with a 10-7 win against USC in Los Angeles, led by an experienced quarterback and a defense that on average is allowing about 20 points a game. But a look at Wazzu last year reveals a team that hired a high profile coach who installed the Air-Raid, a player who left the team after having trouble adjusting to the new coaching staff, a team that played 17 freshmen on a regular basis, and struggled to a 3-9 record.

When Oski looks into this mirror, does he see the 2012 Cougars or the 2013 Cougars? Saturday's game in Berkeley will go a long way towards answering that question (the November 9th game against USC should answer it definitively). Lets take a look at last weekend's WSU vs Stanfurd game (played in Seattle in a mostly empty stadium) to get a better idea of who the 2013 Cougars are.

Washington State likes to run short plays to the wide receivers from the spread formation including a variety of screens and slants. Here is one example of a slant. Washington State is in the spread with receivers #88 Isaij Myers (junior) and #85 John Thompson (freshman) at the top of the screen and #84 River Cracraft (freshman) at the bottom of the screen with an outside receiver. The quarterback is red-shirt junior Connor Halliday who has a, much improved, accurate arm that works well in the Air-Raid. Stanfurd is in a 3-3 defense with nickel personnel. 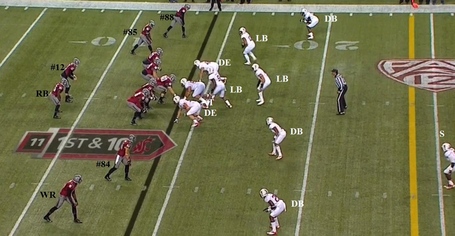 Stanfurd drops into a Cover 2 zone with 2 deep safeties (off the screen) and one blitzing linebacker. Wazzu runs two short slant routes at the top of the screen to flood the zone covered by #17 A.J. Tarpley. Notice that even though by rule #85 must be in the backfield and #88 must be on the line of scrimmage (black line) a hesitation first step by #88 makes it so that both receivers make their break at the same time. 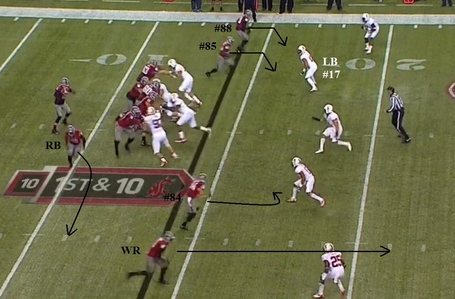 Two receivers, one defender and a quick throw results in a completion to Myers for a 5 yard gain.

The play uses the formation to spread the defenders out across the field and creates a match up that cannot be defended by the defensive coverage. The pass rush is negated by the quick throw. A pass substitutes for a run and is highly effective, as long as the receiver catches the ball. This is why consistency is so key for the Air-Raid offense, the ball has to be on target and the receiver has to catch the ball. Multiple dropped passes were a big reason why Wazzu lost against Auburn in the first game of the year. Expect to see lots of short passes and hope that the Cougers have butterfingers.

The next pair of plays are interesting because of the formation that was used. Washington State lines up in a two back Pro set which is a traditional running formation, except that Halliday is in shotgun instead of under center.

Furd is in a 3-3-5 once again and showing blitz with all linebackers and the nickel back. Those two running backs would sure make good pass protectors... 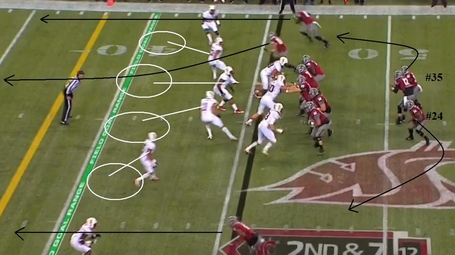 But since when does Mike Leach waste an eligible receiver on something as mundane as blocking. After a run fake (a hand off is just about as unlikely as a blocking assignment) both running backs (#35 Marcus Mason and #24 Theron West) head out into the passing pattern. Stanfurd only rushes 3 and drops 8 defenders into Cover 2 zone. All the underneath defenders should make the short passing routes that Leach favors more difficult to complete but this pattern stretches the 2 deep defenders with 3 deep routes and the two running backs release into the backfield where there are NO DEFENDERS.

A play perfectly designed to beat the defense whether the blitz was on or not.

The next play is another one run from the Pro Set. The WSU formation is identical to the one above (except they are headed the other direction). Stanfurd is in the 3-3-5 and showing blitz with 2 linebackers. 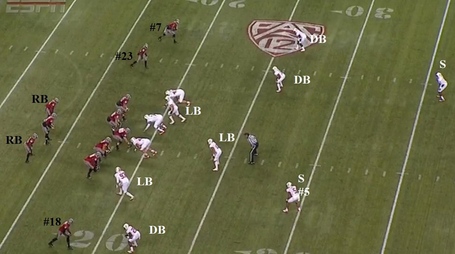 After the snap Cougers receiver #7 runs a deep curl route drawing double coverage (no #7 on the Wazzu depth chart yet the jersey number really looks like a 7), while #23 (listed as a running back? what is up WSU?) runs a pattern into the flat that he turns up when he realizes no one is bothering to cover him. #18 Kristoff Williams runs a Fly route (also called a Go or Streak route). The running backs once again release into the back field. 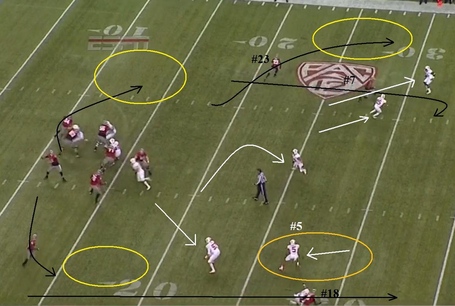 Stanfurd really botches the coverage as every receiver except #7 is wide open. Halliday correctly chooses to throw the to highest reward receiver's route #18. The coverage may be Cover 2 again but for some reason the safety #5 moves up instead of dropping allowing Williams to get free behind the coverage.

Only a slightly under thrown ball keeps this from being a touchdown. Stanfurd just did not look prepared for this formation. Wazzu did not run it very often which may be part of why they only scored 17 points.

Connor Halliday may be good but his efficiency drops precipitously when he is under pressure and he is forced to try to move out of the pocket or when he panics. Here Stanfurd runs a stunt with their linemen and outside linebacker #93 Trent Murphy (who has his hand in the dirt/rubber).

Halliday panics and throws the ball up for grabs. The safety rotates over and easily intercepts the ball for a pick-six.

Worse for Wazzu was that Connor Halliday had to leave the game after being injured by the hit he took from Murphy.

The current information I can find indicates that Halliday will start against Cal. But if he is unable to go his backup is redshirt freshman Austin Apodaca. Against Stanfurd Apodaca showed a live arm and an ability to make some difficult passes, though he is very inconsistent. The biggest difference between Halliday and Apodaca is probably Apodaca's ability to run.

While not on the level of Marcus Mariota or Brett Hundley, Apodaca's mobility is quit a step up from Halliday who can be politely described as immobile.

Here we see a famillar 4-3 defensive front Stanfurd has 3 receivers split out wide and a tight end. #20 senior Deone Bucannon is the most notorious player on Wazzu's defense (for violently illegal hits) and may be their best defender as well. 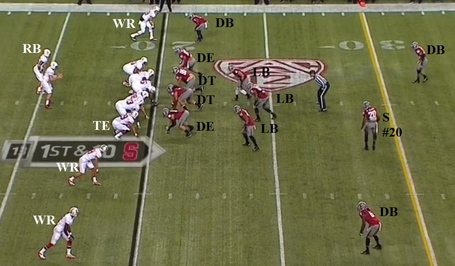 At the snap WSU brings pressure with 2 blitzing linebackers at the right side of Stanfurd's line. Their intention is to make 3 blockers try to stop 4 rushers. On the back side of the play the Cougars are running a stunt. Lots of colors below because there is a lot going on.

This blitz happens to be targeted at the section of the line where Stanfurd intends to run.

The pressure is designed to make confuse the offensive line to try to get them to make a mistake. Stanfurd's line is very good at picking up the blitz above as well as the one below on a passing play. This time WSU is in a 3-3-5 defensive set (3 D-linemen, 3 linebackers and 5 defensive backs) as they don't want to be caught with a small lineup if Stanfurd calls a power run (sorry, no diagram for this one - I forgot to prepare one). The Cougs bring 5 pass rushers and Stanfurd blocks with their 5 linemen and running back #25 Tyler Gaffney.

All the pass rushers are picked up but this play still results in a sack because the coverage down field is good and quarterback Kevin Hogan (#8) has limited time.

Here is another WSU blitz on a Stanfurd passing play. Once again Furd has 3 receivers, 1 tight end and Gaffney in the back field. This time Wazzu is in a 3-4. Linebackers #13 and #42 are going to come on a blitz.

Washington State has 2 pass rushers to Furds lone left Guard. Gaffeny (#25) recognizes the blitz and shifts over to take the extra man. 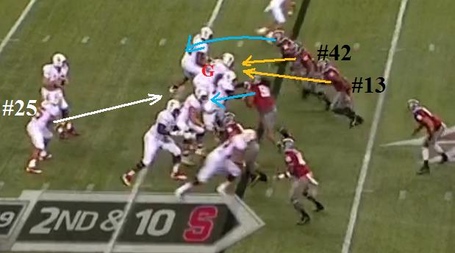 Once again the Cougars have good coverage down the field.

Hogan is sacked a second time (well maybe it is a run for no gain).

Lets take a closer look at that block by Gaffney.

Minor league baseball? Sign that guy up for the WWE.

Washington State's offense is very similar to the one that Cal is running except that WSU doesn't even try to run the ball. They don't have the team speed of Cal but even without the speed the offense would be unstoppable if their receivers did a better job of catching the ball. The offensive line is not very good, both tackles stand out because of their poor play. On defense the Cougars are aggressive and do many things well but nothing outstanding. They did show a weakness covering speedy receivers down the middle of the field.

The final score against Stanfurd was a 55-17 loss which had the Cougar fans in Seattle drowning their sorrows with popcorn.

With concessions at Memorial Stadium running out by halftime, what will Wazzu fans have to resort to in order to drown themselves on Saturday? (You can answer in the comments)

I have no where else to put this: Mike Leach gives dating advice. I think the A&W restaurant and coupon book are references to a time long past. This might be more relevant.

The Golden Bears went through a crucible against Ohio State, then the team was quenched in the flood at Autzen. Will the team emerged tempered because of the experience or more brittle? This game will tell us more about the state of Cal football than the previous 4 games combined.