How is Oregon State scoring 43 points a game? GIFs and photo breakdowns of the Beaver offense.

Share All sharing options for: Scouting Oregon State 2013 - Rest of the Pac Breakdown

Oregon State reminds me of my pre-season dreams of what Cal's season could have been. In a losing to Eastern Washington to open the season the Beavers showed a porous defense, anemic rushing attack and extremely effective passing attack. After one game Sean Mannion was one of the few quarterbacks in the entire nation who threw for more yards than Jared Goff. Oregon State went on to beat cupcakes Hawaii and San Diego State, won an overtime shootout against Utah in Salt Lake City and look the part of the favorite against Colorado and Washington State. Would the Golden Bear defense have time to gel without the injuries and insane schedule? Would Jared Goff have gained confidence and the offense figured out how to function despite a limited rushing attack?

Mike Riley's teams always seem to start slow but finish strong, this year couldn't have much worse of a start but they have improved tremendously and look sure to secure a bowl bid and possible end of the season top 25 ranking. Why couldn't they have visited Berkeley earlier in the season?

Washington State hung in the game against the Beavers last week for three quarters. At the start of the 4th quarter it was 24 all. Then the mistakes started, a botched fake punt and three interceptions all led to short field touchdowns providing the 28 point margin of victory. The Cougars proved the Air Raid can keep pace with OSU, they also provided 60 minutes of practice against our offense for the Beaver defense, which noticeably improved. I hope Dykes and Franklin can conceive a game plan that will fluster the OSU defense for a full four quarters.

I want to take a look at the offense Mike Riley is using to succeed despite paltry rushing numbers on the season. Here is the base play of the offense, it was used last year but has become the staple this year

The Wide Receiver End Around

Oregon state lines up with a fullback (#33 Tyler Anderson) and running back (#28 Terron Ward) in the backfield. Quarterback (#4 Sean Mannion) is under center while the tight end (#10 Caleb Smith) is lined up on the line of scrimmage two yards outside the right tackle. There is a receiver wide right. Before the snap #6 Victor Boldin goes in motion from the bottom of the screen. WSU is in a 4-3 defense. 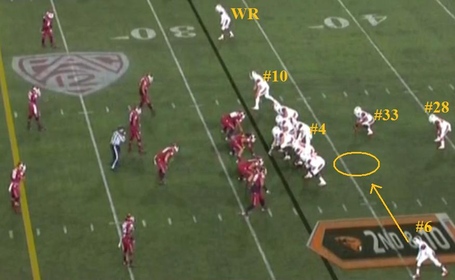 Look at where Boldin ends up at the snap, does this formation remind anyone elso of the Diamond/Bone formation? A major difference is that the receiver is already moving at near full speed.

On the right side the wide receiver and tight end block the defender heads up across from them. The right tackle seals the end of the line of scrimmage while the fullback provides a lead block (in this case on the crashing safety).

The ball is handed off to #6 Boldin while #28 Ward performs an inside run fake.

We can see how difficult this play is to stop. The blurriness is from the standard definition source ESPNU on DishNetwork (happy I was able to view the game, would have been even happier if I didn't spend the entire game wondering if I should get my vision checked).

The End Around sets up several other plays like

Here Oregon State has two receivers stacked (one nearly behind the other) wide left, a tight end lined up next to the right tackle and a fullback and #28 Terron Ward in the back field. Wazzu is once again in the 4-3 defense. 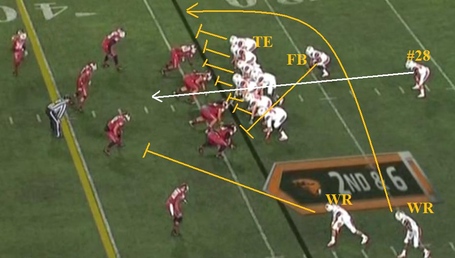 The wide receiver off the line of scrimmage to the left goes in motion pre-snap and once again the ball is snapped when he is in the backfield. This time he is a decoy and the ball is handed off to Ward who has the fullback blocking for him.

The run is good enough for a first down. If you think that every time the receiver goes in motion pre-snap it will be a run, you are being set up for a

Once again OSU has two wide receivers stacked wide left, one of whom will go in motion pre-snap. This time #24 Storm Woods is the running back, #10 tight end Caleb Smith is lined up tight right and instead of a fullback the Beavers have a third wide receiver lined up just to the right and behind Smith. 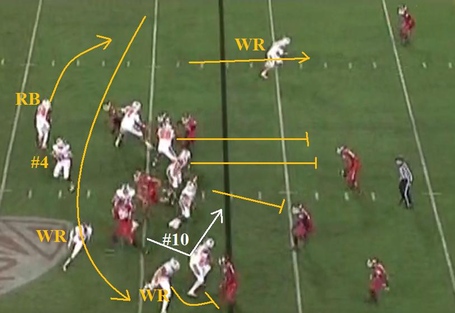 Smith fakes the block and releases inside. The center and both guards momentarilly engage the defensive linemen before looking for second level defenders to block. Woods provides an outlet pass target in case the screen was covered.

No need to worry about an outlet pass, #10 is wide open and would still be running if the offensive line blocked anyone down field.

Oregon State's massive tight ends make a formidable receivers in the down field passing game as well as run blockers and screen targets.

Although there are several options for this pass on the passing tree, against Wazzu Connor Hamlett (who at 6'7'', 263lbs is somehow bigger than Smith) ran this route directly at the Sam linebacker. 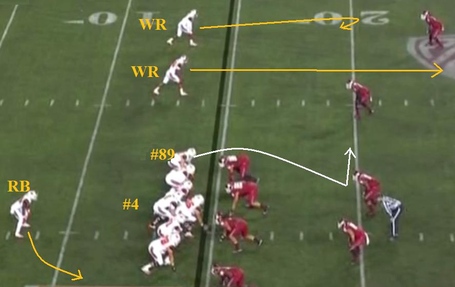 The wide receivers to the left clear out the defensive backs and #89 Hamlett uses his wing span (like a post up basketball player) to get separation from the linebacker.

On this view it is easier to see how the tight end used his body and how Mannion places the ball where only Hamlett can catch it.

The Route of Questionable Legality

Here the Stick Route becomes a Pick Route as the tight end does not even try to disguise the fact that he is plowing into the linebacker #37. If a true pick this would be illegal but it is disguised well.

#37 obligingly covers the tight end who ran into him while linebacker #47 allows #84 senior wide receiver Kevin Cummings free after the receiver clears his zone. Unfortunately for the Cougars, #37 has left the zone in the middle of the field, whether he is supposed to cover the stick route or the middle zone both linebackers cover the stick route and leave Cummings wide open.

Two backers covering the tight end... There is enough open space for Cummings to establish a Homestead.

Wait... I have gone 1111 words (some of those must be HTML) into this post and not mentioned Oregon State's most dangerous play maker?

All those plays we just looked at, they can all be run for Cooks:

The End Around going the other direction at the goal line

My wife said I should post a midterm and let you figure out what is going on in these plays. Don't worry about your scores, I am lazy and giving Stanfurd grades for everyone! You all pass, even if minimally.

Last year Sean Mannion was injured, unable to get any velocity on his throws, and Brandin Cooks was in the shadow of Markus Wheaton. This year Mannion is throwing frozen ropes, on the money, all over the field and Brandin Cooks has 944 yards in just 6 games (Mannion has 25 touchdowns and just 3 interceptions in those games). OSU lost their first track meet of the year but have triumphed in the other five. Can Cal keep up? we may not know until Sunday morning.