Check out our video interview with Cal basketball head coach Mike Montgomery, who opens up on a variety of subjects regarding college hoops and discusses many of his overlying philosophies as a coach.

This interview was conducted before the start of the 2012-2013 season.
"Try to make him laugh," suggests my dad.

I’ve been bouncing ideas off him before my interview. Both of us lifelong basketball players and enthusiasts, my dad and I have watched Mike Montgomery’s teams play for years at Stanford, Golden State, and Cal. After his observation, I realized Montgomery is a coach who does typically appear to be pretty stoic. So I’m not sure that the 34-year coaching veteran will necessarily find my questions funny. Whether or not college players should get paid, as well as the way that certain NCAA rules affect on-court and in-classroom behavior, are probably not the most desirable topics of discussion for many college coaches.

Although I love basketball strategy, for this interview I am more focused on a universal picture of the sport. The intersection of education and basketball has always piqued my interest, and I want to know the educational and athletic philosophies of one of the most respected and successful college coaches in the country. Montgomery has seen many different decades of basketball, and I am curious to see how attuned he is to the educational, economic, and interpersonal sides of athletics.

I can’t imagine that thoughtfully-constructed outlooks on all of these facets of a program are anything less than integral to the kind of coaching longevity Montgomery has achieved. But I’m not sure whether he will remain safely within the bounds of diplomacy in his answers. 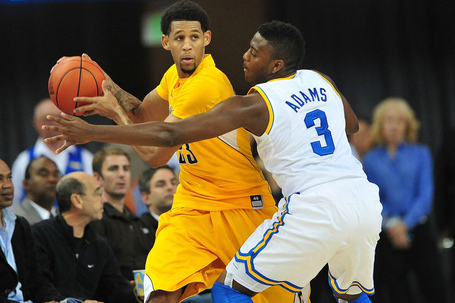 He walks into the gym purposefully, focused, unsmiling, and exclaims in mock astonishment. "You’re all in your Sunday best! They didn’t tell me!"

While it has, in fact, occurred to me that games happen far less frequently than on a daily basis, I am kind of surprised to see him in anything but a formal, black suit and dress shoes.

I have always seen one purpose of an interview as an opportunity to wholly focus on the subject and their most current state of mindfulness. Mike Montgomery shifted this dynamic. He immediately focused on me. He tuned into details about me from the moment he walked in-- how long I'd been waiting for him, the degree of formality in my outfit, what I wanted to talk about, even what would make me laugh-- he kind of stole my game plan! He wanted me to feel comfortable. In coaching, as well as throughout our conversation-- he effuses a raw consideration of others. This comprehensive, immediate understanding of people as well as athletic strategy translates into a very real appreciation and concern for the lives of both his own and other players-- as athletes, but also as sons, brothers, friends, community members.

He laughs for the first time as I ask him about differences between college and professional coaching. And he laughs again after I end the interview by trying to discuss his upcoming recruiting class.

"No!" He feigns admonishment. "It’s illegal!"

For the split second before I realize he is joking, I’m almost scared.

He doesn’t laugh, though, as he discusses the "one-and-done" rule, the NCAA mandate that players must wait one year after high school before they can be eligible as professional prospects. He doesn’t laugh as he talks about the deep-seated value of an education, and the opportunities afforded by exposure to intellectual atmospheres. And he doesn’t laugh as he brings up the reality of the gaping contrast between game revenues and the financial situations of players' parents who can’t afford to come see their kids as they generate millions of dollars for their schools’ "amateur" athletic programs.

The censoring potential of diplomacy is no longer on my mind as I listen to him speak. He is much more concerned with connecting to and understanding the people surrounding him-- whether they're players, interviewers, or coworkers.

Mike Montgomery carefully weighs each question I pose, demonstrating a complex understanding of both sides of each issue, as well as the ability to respond in concise terms comprehensible to listeners who could be unfamiliar with basketball or higher education. He shows a deep consideration of the players, students, families, and institutions that all converge at the focal point of basketball.

He tells me he’s "excited about the possibilities" this season. His holistic, compassionate view of his team will doubtlessly continue to underlie this season’s progress. Here is the interview: 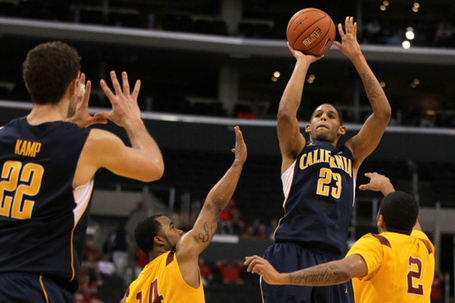 What's been the most challenging part of coaching here thus far?

Like, here at Cal? Well, just the adjustment to the climate in recruiting in college basketball right now has been a little bit tough. It's kind of changed over the years-- the values, what kids may be looking for, what things they want out of their college experience.

What are you most looking forward to about this basketball season?

Well, we've got a lot of work to do before the season starts- I'm trying to get these guys ready to win a game. But I like this team, I think there's some talent here. We've got to keep everybody healthy. We've got some experience coming back. I'm excited about the possibilities if we can put it all together.

What's been the most challenging moment of the season thus far?

Well, it's kind of changed over the years... the values, what kids want out of their college experience... It's a challenge for everybody.

What's the biggest difference between coaching at the professional and college levels?

Well, in college, you're kinda the boss. What you say goes. In the pros, the coach is not the boss, necessarily. He makes some decisions, but there are a lot of other things involved... contracts, agents... Really, in the pros, you have to know how to deal with your best players and keep them motivated... So I likened it to a totem pole a little bit, where in college you're at the top of the totem pole, and then when you go to the pros they kind of take that totem pole and put it in the ground and you're kind of at the bottom. That's probably a little bit of an exaggeration, but there's some truth to that. But the best coaches in the pros... have control over their personnel, and there are some positive things going on.

What do you think of the one-and-done rule?

I think it stinks. If kids genuinely don't want to go to college, and they want to go play in the pros, let them go. They're not really interested in an education, so why hold them to one year? It kind of makes education a sham in a way, because a lot of these kids have one foot out before they even get there. So they're really not doing the work in the classroom. They're trying to stay eligible for the first semester, and at the end of the year, they're going to try to go to the pro's anyway. So I don't think that works. 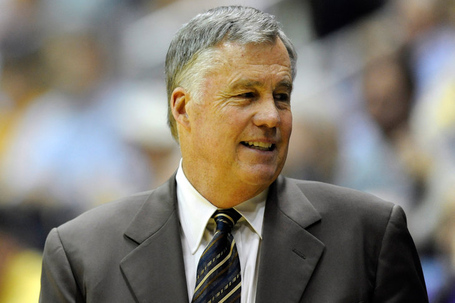 I do think there's a value to education, being in college, attending class with an honest attempt to learn. The degree is the ultimate, and you should try, but it's not an end-all if you don't. But I think the one and done just doesn't work. It would be great if they could go the way baseball has gone, where they could go right out of high school, but if they come to college, they have to stay for certainly more than one year. Three would be great, two would be better.

What do you think about college players getting paid?

Well, I've always been sort of against it, because I've felt like a college scholarship, the opportunity to get an education for free is a heck of a deal, and I still feel that way. However, based on how much money is being made a lot of times as a result of the players and their expertise, I'm not so sure that it's not time to take a serious look at it. The TV packages that people are signing now in these conferences... they're worth a lot of money. And it's being made primarily on the backs of the football and basketball programs. And the cost of education is not always being met for these kids.

There's a lot of these kids in those two sports that come from a little different socioeconomic backgrounds, that don't have the wherewithal to be able to pay for round trip tickets, parents can't see them, and so forth. So I think that maybe there's a pretty clear argument to be made. Now I know we're going to be heading into football playoff games for example. I think it's kind of hard to justify a school making 4, 5, 6 million dollars on a football playoff game, and the athletes not benefiting at all. That having been said, don't misunderstand me, I really think the value of an education is worth its weight in gold. But things have changed, so I think it's time maybe we take a look at that.
Is there a particular game or matchup you're most looking forward to this season?

First round of the NCAA! Provided we can get there. You know, the thing about it is, there's been such a heavy emphasis put on the NCAA tournament, a lot of people have lost sight of the day to day activity, the games that we play. We're five months out here, working hard every day, so every game has significance. Obviously everybody looks at the rivalry games, but I think every game has its value, and I think you should cherish that as a student athlete.