Like Friday night's game against Utah, it was aesthetically ugly. But the result is beautiful: The Bears have swept the toughest road trip of the season.

Honestly, I was bracing myself for a loss today. The Bears faced an unusually tough turnaround. Consider that they finished up in Utah at 7:00 pm on Friday. That meant that they were back out on the court 40 hours later, 526 miles away, and as Colorado is fond of reminding you, 5,345 feet in the air: 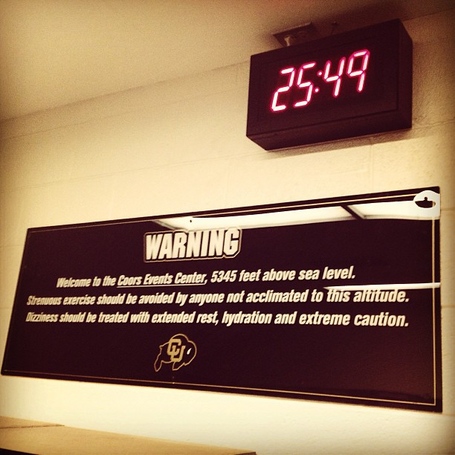 And that doesn't even get into how good Colorado is. I was really impressed with the defensive game plan Colorado brought into today's game, and the physicality with which they executed it. They took away so many things that Cal typically relies on - Layshia mid-range game, 2nd chance points, easy post entries . . . the Bears were forced outside of their offensive comfort zone and it showed.

So how did Cal still win? Constant stifling defense, and a little bit of their bread-and-butter: unstoppable rebounding.

In the game preview I mentioned that Colorado is a team that (especially at home) might actually out-rebound the Bears. Gottlieb and company would probably be offended at that suggestion, but it's true. And for most of the game, it was more or less even. But down the stretch the Bears took over the glass, pulling down a stunning 4 offensive rebounds on missed free throws that collectively allowed Cal to both burn the clock and scratch out just enough points from the line to hold off a very persistent Colorado.

Granted, simply making more of those free throws would have eliminated the need for offensive rebounding heroics. But it's a nice trick to have in your back pocket when the freebies aren't falling. Which, as we all know, will continue to be the case all year.

It's tempting as a fan to bemoan the errors that kept this game close - the empty offensive possessions, the missed free throws, the unnecessary fouls. Still - I'd argue that this game is the 4th toughest on Cal's Pac-12 schedule (after @ Stanford, vs. Stanford and @ UCLA) and the Bears won despite obviously trying circumstances.

-Eliza Pierre made a number of big plays, including hitting a couple of jumpers in the first half when Cal didn't really have anything going on offense.

-EP and Brittany Boyd tend to receive most of the defensive praise because the defensive plays they make are always very obvious. So I'll admit that I've been remiss in noticing and crediting Layshia Clarendon for her much more subtle defense. I was clued in that she might be Cal's best perimeter defender when she drew the Sugar Rodgers assignment against Georgetown. It was further confirmed when she took on Chucky Jeffery and held her to 13 points and a negative turnover/assist ratio. Jeffery really only controlled the game briefly when the 2nd half began when she ran off three straight baskets followed by an assist. The rest of the game she was held fairly well in check.

-Everything Layshia did on defense was absolutely critical, because she had her toughest offensive game in quite some time. Combining field goals and free throws, Layshia went just 4-17. That's weird. Lots of credit to Colorado for obviously disrupting her rhythm, but I doubt that happens again this year.

-If all else fails, you can count on Brittany Boyd to get past her defender and sacrifice her body in the lane, which will result in either:

I feel like these results happen in roughly equal proportion to each other, which makes it a pretty good strategy most of the time. It also might result in a very painful looking knee-knock, but it takes more than that to stop Boyd.

In my mind, this is a win to savor . . . for about 24 hours, because Stanford is coming to town for the biggest home game of the year and the continuation of the defining stretch of the regular season. Damned schedule-makers. I'll have more on Stanford on Monday, but suffice to say that they present an always formidable challenge.