Cal Football 2012: What did you see from the Offensive Line?

We've talked about and around this unit in the previous positional round-tables, but now their time has come. So what did you see from the Offensive Line in 2012?

Share All sharing options for: Cal Football 2012: What did you see from the Offensive Line?

I thought nothing could be worse than a Marshall-coached Oline. And yet, last year may very well have proven me wrong. On the plus side, Schwenke did an admirable job filling in at center. Despite inexperience and a hand injury, the snapping was generally improved. Yes, there were still plenty of hiccups. But, the bar was pretty low in the first place. Quite honestly, it's mildly ridiculous that we even have to talk about something so fundamentally basic as a non-disastrous shotgun snap. And yet, here we are.

I also thought that walk-on Bill Tyndall acquitted himself well as our fill-in tackle. My inexpert opinion would have started over Tyler Rigsbee, in fact. But, I know little to nothing about Oline play.

All I know is that this unit had a rough year. The film room had to be a nightmarish replay of blown assignments and technique breakdowns. Guys all across the line took turns missing blocks. If I've going to bend over backwards trying to be fair, the line play did seem to improve towards the end of the year. And, there is a bit of a chicken and egg scenario where poor pocket presence from our QB as well as an inept passing game contributed to protection issues and the lack of push in the run game.

Even so, there were far too many instances where pass rushers ended up with a free run at the QB. Usually, this was from the edges. But there were also plenty of times where the A or B gaps might as well have been turnstiles.

I'm not sure whether this is a recruiting issue where we simply didn't have the horses or coaching issue where we didn't effectively develop players. And, of course, it could also be a playbook issue where our guys never settled in because of all the switching between pro-style, spread, and hybrid schemes. It's probably all of the above.

I wish I could be hopeful looking forward to next year. But it looks like we're going to be very young at both tackles and at center. That's usually not a recipe for success. 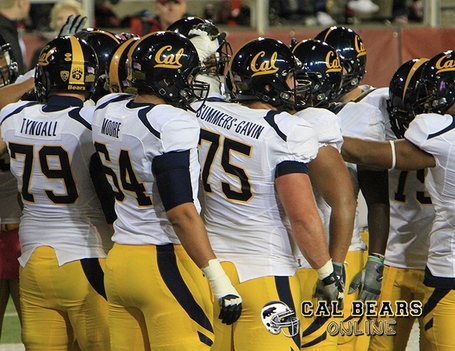 JahvidKnowsBest: The source of this year's issues started with the offensive line. I think this was perhaps the worst line of Tedford's career, and that is why we are where we are today. Offensively, we were riddled with injuries upfront; the unit had the potential to actually be one of the better line's in the PAC-12 if it wasn't for this. As a result, our lines run blocking was okay, (there were games when we ran the ball very well) but our pass blocking was always abysmal. When ever we got into third and long situations, the opposing DC knew that all he had to do was bring pressure. The line was never able to pick up blitzers, let alone handle an adequate 4 man front. To make matters worse, Maynard may have been the worst pressure-handling quarterback of the Tedford era. Also, this year was somewhat unusual in the amount of high caliber defensive linemen in the PAC-12. Star from Utah, Jordan from Oregon, Sutton from ASU, I know Arizona also had a few guys, as well as UCLA and USC. Looking at this combination of factors, it really is no surprise that 2012 was the season that it was. If you look at the games we were able to win: Washington State, Southern Utah, and UCLA, they were all games when Maynard was able to get the ball out continuously and the protection was able to hold up for the most part (the run game was also clicking during these games, which also helped a lot).

Ohio Bear: I am not sure what I can add to what has already been said. To say that the 2012 Cal offensive line play was a disappointment would be an understatement. Not only was the line unable to impose its will physically against the opposition on a consistent basis, it also suffered from mental and physical mistakes that translated into penalties. Cal had the penalty bugaboo this season and offensive line was a major culprit that contributed to that. By my rough count, approximately one-fourth of Cal's penalties this season (25 of 99) were committed by the offensive line. And that doesn't even include the ones that the opposition declined.

The offensive line's play was shocking to me. I don't believe I am alone in thinking that Coach Michalczik's return to the staff a couple of years ago would solve our offensive line problems. Unfortunately, however, the problems continued in 2011 and 2012. And the 2012 offensive line play may have been the worst we saw during Jeff Tedford's run as Cal coach.

I am far from a Zach Maynard apologist, but the kid didn't have a puncher's chance with this offensive line. 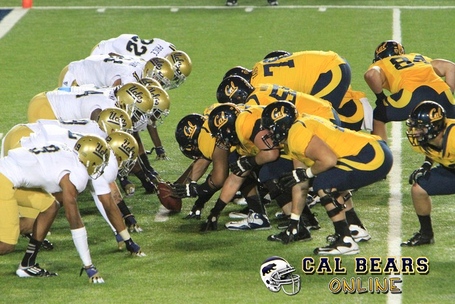 BlueandGold15: It is no secret that Cal had one of the worst offensive lines in the country last season - the unit gave up an astounding 40 sacks, 7th most in all of college football, and to be quite frank, it was a miracle that Maynard wasn't hurt sooner playing behind them.

The line was regularly pushed around and physically dominated by opposing defenses all year, particularly against Stanford, USC, Arizona State, and Ohio State. It was not uncommon to see them losing one on one battles up front - Tyler Rigsbee, I'm looking at you - and the group had difficulty picking up twists in general, playing decently in only a handful of games. Oddly enough, this may even be why Sofele and Anderson had to play so much - with the line situation as bad as it was, Bigelow's still-developing pass protection abilities made him a liability in that department.
Some of this should have been expected, with two starters - Galas and Summers-Gavin - essentially down or limited the entire season. It is true that part of the line's struggles can also be attributed to the strong group of Pac-12 linemen mentioned earlier - many of whom will not be around in 2013, thankfully - but part of it must also be pinned on mediocre strength and conditioning, as well.

Getting stronger and rebuilding the talent level of the line will be key for next season - and to his credit, Coach Dykes has noted the need for that.

The good news is that there's nowhere to go but up.

Unclesam22: Obvious joke is obvious here, but the offensive line this season was OFFENSIVE. Seriously, as we've covered in the other roundtables about some of the other positions, and as others have stated above, if you can't block the front four, you have no chance at all of being successful.

So when you add in the drive killing penalties and the bad snaps, it's a wonder that Maynard and our RB's did as well as they did. And all of these things were surprising to me since I really thought at the beginning of the season that this unit would be one of the best on the team. Clearly I know nothing about football, but I thought given a full offseason under Coach M and some seasoning for some of the younger players would result in a better OLine. Injuries didn't help anything either, so this ended up being emblematic of the team's failures as a whole.