It's a webstream of Cal Women's Gymnastics. Bears have already surpassed preseason expectation to be ranked 17th in the country. Can they keep it going in tonight's meet in Seattle? GO BEARS!

Cal Women's Gymnastics at Washington's Quad Meet (vs. Washington, UC Davis, and U. of Illinois-Chicago)

The problem with college gymnastics, particularly the women, is that for the most part the gymnasts are already past their prime comes college age. All the top girls who have competed in the Olympics have already cashed in on their Olympics experience and are no longer eligible to compete in college. Nevertheless, these collegiate gymnasts are still quite good (as long as you don't expect completely what you see in the Olympics) and some of them do represent our alma mater, California.

Thanks to the new Pac-12 Networks, one Cal meet was apparently on TV (although via Tape Delay) already. More of the meets are now available online via "Pac-12 Digital" until the conference championship is back on TV.

Cal Women's Gymnastics have been doing quite well so far this year. From the CalBears.com article:

Cal holds a team scoring average of 195.000 and has matched their win total from last season through only two meets of the 2013 campaign.

New head coach Justin Howell's squad will look to keep on rolling (and tumbling tonight). The Bears are lead by junior Alicia Asturias. So far, two meets into this season, the Bears have don particularly well on the vault and on the floor. Bears have already defeated UC Davis in their second meet of the season.

So check out this stream of the Cal Women's Gymnastics tonight and go support them in person when they get back to Berkeley. 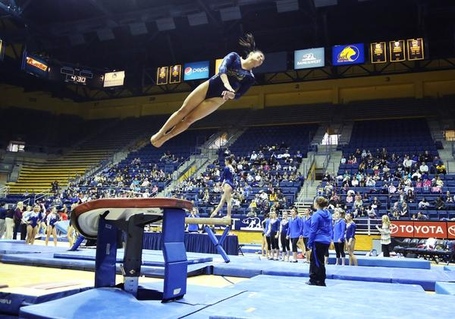