Mythbusting: Is Sonny Dykes Predisposed to Having Poor Defense?

Louisiana Tech defensive coordinator Tommy Spangler has been with the Bulldogs since 2007. Did his defense take a nosedive after Sonny Dykes' arrival in 2010?

Share All sharing options for: Mythbusting: Is Sonny Dykes Predisposed to Having Poor Defense?

When Sonny Dykes was announced as the Cal head coach, many of us foresaw a smorgasbord of glorious touchdowns--both on offense (yay!) and defense (boo!). But are we unfairly conflating Sonny Dykes' teams with other all-offense, no-defense teams such as Houston and Texas Tech?

Fortunately we are in an excellent position answer such a question because Louisiana Tech's defensive coordinator Tommy Spangler has been with the Bulldogs since the 2007 season. He had three full seasons before Dykes arrived and three seasons during the Dykes administration. He hasn't had tremendous coaching turnover during his stint at LA Tech: defensive line coach Stan Eggen has been there since 2008, although linebackers coach Jeff Koonz has only been with the Bulldogs since 2010. If Dykes' teams are predisposed to have poor defenses, we should see a pronounced difference between the two eras.

Now let's compare some defensive statistics before and during Dykes' tenure.

First we'll look at the number of points surrendered per game. In each of the following graphs the red line represents the transition between the Derek Dooley era and the Sonny Dykes era.

The same pattern holds here: Dykes' tenure saw the best defense and the two worst defenses of of the Spangler era. Other than 2012, run defense was usually respectable for Louisiana Tech. In terms of national rankings, their pass defense was often worse than their run defense.

Once again we see the same pattern. Note that in several of these categories the LA Tech defense is much more volatile under Sonny Dykes. It was generally consistent prior to his arrival.

This one looks a little different. Despite clearly being Spangler's best defense, the 2011 unit was only 3rd in total yardage. The 2012 defense gave up over 500 yards per game and was last in the nation under that metric.

Back to our familiar pattern...

3rd-down conversions show the same pattern we have seen over and over. Red zone defense became progressively worse under Dykes. This is rather surprising given that the 2011 defense was strong in most other categories (however, they were 7th in the nation in keeping the opponent out of the red zone). By 2012 they were giving up touchdowns on 72.55% of opponents' red zone trips. That is awful. Fortunately for the Bulldogs, they were only in the middle of the pack in terms of allowing opponents to reach the red zone.

If we combine the rankings of everything we have seen up to this point, we see that same, familiar pattern.

In case you want to take a look at the numbers in chart form, I have provided them below. 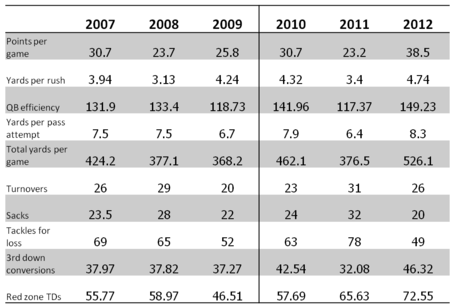 Is this a meaningful difference?

Do we have enough evidence to conclude that the defense was demonstrably worse under Dykes? The interocular percussion test does not seem to provide any strong conclusions in either direction. Two seasons under Dykes were clearly worse than than the defenses prior to Dykes, but the 2011 season featured Spangler's best defense. We'll have to take a closer look at the data to reach a valid conclusion.

The average ranking pre-Dykes was 62.13 while the Dykes-era average defensive ranking was 72.10. The difference between the two is not statistically significant, however. The difference is not large enough for us to deny that this happened simply by chance.

Here are the year-by-year numbers.

What about All-WAC players on defense? We should be worried if Sonny Dykes had a wealth of them and still had a lousy defense.

LA Tech had 5 first-teamers prior to and during Dykes' tenure. They had 3 second-teamers prior to Dykes and 6 during the Dykes era. In terms of personnel, Dykes appeared to have better players (perhaps a result of his solid recruiting). Does this shed further light on our myth?

If we adjust for number of players on All-WAC first-team and second-team defenses, things don't look so sunny. Now we have a significant difference between the pre-Dykes Dykes-era defenses: Dykes' defenses (again, controlling for number All-WAC players) had worse defensive rankings by 17 spots. If we control for starters and All-WAC players, his teams' defensive rankings drop by 39. That's bad. That's the difference between a top-25 defense and a middle-of-the-pack defense or a middle-of-the-pack defense and an abysmal defense.

Based on our initial analysis, it looks like defense suffers under Sonny Dykes. Despite having better personnel and roughly the same number of returning starters, LA Tech's defense was clearly worse under Sonny Dykes when we account for returning starters and all-conference players. Without diving into gametape, it's tough to figure out why Spangler's defenses were worse under Dykes than they were under Derek Dooley. LA Tech's defense had generally been on the field 31-33 minutes each of the years, but this didn't change substantially under Dykes. The Bulldogs only turned the ball over three more times under Dykes than they did the previous three years, so that doesn't account for the defense's struggles. Special teams didn't give up shorter fields under Dykes than it did under Dooley.

Overall, it's not immediately obvious why defense has been worse under Sonny Dykes. Do any of you have any theories to explain it?