It was no secret. The Bears needed a capable big in the 2013 recruiting class.

After missing out on several top targets, attention turned to the best center available out West: Kameron Rooks (Mission Hills HS, CA). Rooks finally pulled the trigger after several weeks of deliberation and, to the relief of Cal fans everywhere, chose the Golden Bears. 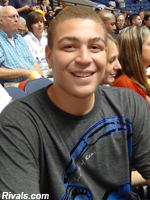 This YouTube highlight reel isn't the prettiest in the world. However, this more recent reel will make you feel a lot more confident in Kameron's ability and is indicative of the progress he continues to make.

One obvious characteristic of Rooks that jumps out is his size. Kameron (7'0" and growing to go along with about 270 lbs.) is absolutely massive. As the cliche goes, size can't be taught. Whereas in previous recruiting classes, the Bears have usually added big men who needed to bulk up, Rooks needs to slim down a bit to fulfill his whole potential, but he currently uses his bulk well down low.

The Mission Hills big man is currently averaging 21 PPG, 12 RPG and 3 BPG for his 12-1 high school squad. Rooks possesses a combination of soft hands, a high basketball IQ and impressive passing ability not often seen in players his size. Given these qualities, most of the value of Rooks can be found in his immense upside, as detailed by Anthony Bolton, an assistant coach at Mission Hills:

“His ceiling is high,” Bolton said. “His best basketball is by far in the years to come...”

Rooks has good hands and feet and can shoot with either hand, Bolton said.

“I really think they’re getting a special player,” Bolton said. “It’s a no-brainer to me that coaches should have been all over him.”

Though he is rapidly improving, Rooks is fairly raw at the moment. First, he must work on his conditioning. To be effective at the next level, he must be able to run the court well and display improved athleticism. In the highlight videos, it also appears as though quicker players give him a lot of trouble, a glaring weakness that can be fixed by slimming down. Next, Kameron must continue to practice the fundamentals of footwork. To take full advantage of his massive frame, Rooks will need to improve his footwork in the low-post. Scoring against over-matched high school players is one thing, but to score consistently down low at the next level, refined fundamentals are necessary. As he has already improved in this area as of late, it seems as though Kameron has been working on this aspect of his game significantly.

Kameron, the son of Sean Rooks (former Arizona Wildcat standout and NBA player), is by all reports an extremely bright and coach-able player and there are few coaches who can bring out untapped potential in big men quite like Mike Montgomery. Sean had good things to say about his son's future as a Golden Bear:

"He hasn't really tapped into understanding exactly what kind of player he is," said Sean, who played 11 NBA seasons. "Right now, he has a really big body, a good mindset for the game, great hands. He sees the floor well and he's a very unselfish player."

Sean Rooks said his son may need to drop a few of his 280 pounds, but provides the Bears with a throwback big man.

"I think he's rare. There's tall people, but there's not a lot of big bodies," Sean Rooks said. "Big guys are late bloomers. Once he starts understanding how strong he is and starts to develop, he's going to be an excellent player."

Kameron might not be extremely highly rated by scouting services at the current moment but, when all is said and done, this addition might prove to be a significant one for the California program, as, if he harnesses his potential, Rooks could be the dominant big that has been so elusive for the Bears.

The Cal coaching staff must have been quite relieved when they received news of Rooks's commitment. Kameron provides the Golden Bears with a much-needed big body, something that would have been lacking entirely after the graduation of senior Robert Thurman.

The fact that the Mission Hills center was pursued by programs such as Arizona and Connecticut is a testament to Kameron's immense upside. Rooks chose the Bears largely because of an opportunity to earn immediate playing time, a luxury that probably would not have been granted by his father's alma mater. Though he is a bit raw, Rooks will certainly play meaningful minutes for the Bears throughout the 2013-2014 season, as the Bears are painfully thin in their front-court.

Rooks also chose the Bears because of the coaching he will receive from Coach Montgomery, who his father is quite familiar with:

"I have the utmost respect for coach Montgomery," said Rooks, who averaged 11.6 points at Arizona from 1989 through '92, when Montgomery was coaching at Stanford clubs. "They were our No. 1 rival. He always had classy, well-coached teams.

"I had a good father in coach Olson, but he was like the father across the street," Rooks said of Montgomery. "My son can't be playing for any better coach. He's going to get the University of California education and Cal is one of my secret favorite places."

Where do the Bears turn next? Well, to be honest, there is no clear answer. With three guards committed in the 2013 class, the backcourt seems loaded in Berkeley. Help might still be needed upfront, however. After missing the final lists of both Aaron Gordon (Mitty) and Gavin Schilling (Findlay Prep), the Bears find themselves looking at a pretty barren lot of available big men out West. I asked West Coast recruiting guru Josh Gershon about Cal's next move, and he seemed equally baffled:

Perhaps the Bears hope a late blooming sleeper emerges in the Spring. Perhaps they do look overseas. Perhaps they decide that they have enough talent on the roster with Kaileb Rodriguez and Geoffrey Frid eligible next season and, as a result, save the scholarship. Right now, it might be anyone's guess. But one thing is for certain: the commitment of Kameron Rooks was absolutely crucial.