Happy New Year! There are six bowl games today to ring in 2013, including one that makes us Cal fans die just a little bit inside.

Happy New Year! In the grand new year's tradition, it's college football bowlapalooza. Granted, it's not as paloozatastic as it can be. Traditional New Year's Day games like the Sugar, Fiesta, and Cotton Bowls have moved to other days as the Bowl Championship Series and other bowl executive suits have chosen to bastardize college football tradition spread out the bowls. But in the place of those venerable traditional bowls, you have substitutes like the TaxSlayer.com Gator Bowl (and let's face it: it's probably only a matter of time before that becomes simply the TaxSlayer.com Bowl!) and the Heart of Dallas Bowl to take their place.

Let's go through your New Year's Day bowl schedule, shall we?

Here is the aforementioned TaxSlayer.com Gator Bowl. Slay your taxes like a gator as you watch this one on ESPN2! This is one of those Big Ten/SEC matchups that usually doesn't go that well for the Big Ten. Will this one be any different? If Northwestern can pull this off, it will be the program's first bowl win in 63 years, since Northwestern won the 1949 Rose Bowl against...wait for it...Cal! But as CalBear81 taught us, Northwestern shouldn't have won that game either.

And that was how Woody Hayes ended his illustrious career at Ohio State. As an aside, this video clip shows how times changed in television coverage: without a decent camera angle to view the replay, Keith Jackson and Ara Parseghian, doing the broadcast for ABC, didn't really talk about "the punch" because they apparently didn't see it.

While the Gator is going on on ESPN2, the Heart of Dallas Bowl is on ESPNU. Unless you have a rooting interest for Purdue or OK State, I can't think of a single reason to watch this game. Here's the Worldwide Leader's preview in case you're inclined to read up on this contest and have your mind changed about that.

Another SEC/Big Ten tilt is next on the menu in the steakhouse bowl on ESPN. No rules, just right. If you want a preview of this one, see here for Garnet and Black Attack's take on the game. I'm just going to show you a picture of Michigan's special uniforms they're breaking out for this game. 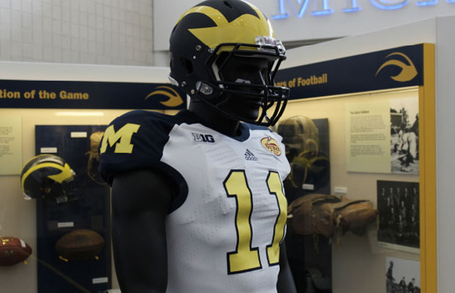 More Big Ten/SEC on ABC with the Capital One Bowl. Is anyone else expecting this one to be ugly? The last time we saw Nebraska, five-loss Wisconsin was hanging 70 points on them in the Big Ten Championship Game. Now the Huskers are in the Capital One Bowl (nee the Florida Citrus Bowl) against an 11-2 Georgia team that fell five yards short of being in the BCS National Championship Game instead of Alabama.

And here it is. The Rose Bowl. I thought about having a dedicated open thread for this one, but I couldn't do it. Why do that to ourselves? Admit it: the appearance of the robber baron junior university in the Rose Bowl is killing you. Dull the pain by rooting for the Wisconsin Badgers. Or do what I'm doing: don't watch it at all.

That's all I have to say about this game. If you want to read more hype on this one, they probably have what you're looking for at Rule of Tree or Bucky's5thQuarter, the SB Nation blogs for the Rose Bowl combatants. If you go to Bucky's 5th Quarter, stop by and let them know what they can expect with Andy Ludwig as their offensive coordinator next year! I am sure most of you have kind words in that regard.

This is certainly a lose lose game for FSU. If Florida State wins big people will just admonish NIU but if it's a close game or FSU people will knock FSU and note a weak ACC resulting in an Orange Bowl bid. Florida State must take Northern Illinois seriously as the Huskies probably represent the third toughest team on FSU's schedule behind Florida and Clemson.

Both staffs are in the midst of coaching changes with FSU losing Mark Stoops, DJ Elliot and Eddie Gran leaving FSU with Sal Sunseri making his debut as a FSU coach. NIU lost Dave Doeren to North Carolina State but the rest of the staff is staying on to coach the bowl game with Rod Carey taking over the head coaching duties. It's doubtful that either team will see any side effect from the coaching changes but it is certainly possible.

This is your one stop open thread for all of today's games. Enjoy the action and comment here on any and all of it until your heart's content.