The Band Still Plays Palms of Victory for This, Right? Cal Survives Itself and Southern Utah, 50-31

Share All sharing options for: The Band Still Plays Palms of Victory for This, Right? Cal Survives Itself and Southern Utah, 50-31

The California Golden Bears needed a win in the worst way today after last week's disappointing season-opening loss to Nevada. The conventional wisdom was that the Southern Utah Thunderbirds were rolling into Memorial Stadium at the perfect time: with the T-Birds an average to above-average FCS team (not an FCS powerhouse), Cal was expected to have little to no trouble racking up the first win of the 2012 season and perhaps building a little bit of confidence going into next week's game at Ohio State.

For awhile, it looked like just the opposite. Though the Bears dominated the game statistically (outgaining Southern Utah 518-371 for the game, a whopping 353-83 in the first half), turnovers, penalties, and mental mistakes kept Southern Utah in the game far longer than the Bears wanted. Southern Utah took advantage of Cal's generosity and trailed the Bears by only three points after three quarters. Staring the possibility of an embarrassing defeat right in the face, the Bears exploded for 30 points in the fourth quarter to survive the Thunderbirds' challenge and come away with a 50-31 win.

To say the least, Cal (1-1) was its own worst enemy in this one. The Bears committed 12 penalties for 106 yards (10 of them for 96 yards in the first half alone), fumbled the ball three times (losing one), and committed two turnovers on consecutive offensive plays in the first quarter. The multitude of Cal mistakes enabled Southern Utah (0-2) to keep the game competitive into the fourth quarter.

For a good bit of the game, it looked like the Thunderbirds would be more than competitive --- despite being on the short end of the statistical battle, the confident Thunderbirds looked like they might have a chance to win this game. Taking advantage of a Chris Harper fumble in Cal territory, Southern Utah parlayed the miscue into a field goal and a 3-0 lead. And when Cal settled for an 18-yard Vincenzo D'Amato field goal on a 4th-and-goal at the SUU 1-yard line to tie the game at 3 in the second quarter, the Thunderbirds had to be feeling pretty good about themselves. The inner Thunderbird was thinking: "A Pac-12 team doesn't want to go for it on 4th and short against us?!? At home? We are tuff enuff!"

The decision to go for the field goal brought about a chorus of boos at Memorial Stadium (and a similar sentiment on the CGB open thread). But that decision was all but forgotten later in the second quarter when Cal appeared to seize control of the game. After forcing a Thunderbird punt, Cal powered its way to a 93-yard scoring drive that featured runs by Isi Sofele and C.J. Anderson through gaping holes opened by the offensive line. Anderson scored on a six-yard touchdown run to make it 10-3 Cal. Sofele increased the margin to 17-3 when he capped the Bears' next drive with a 12-yard scoring run. A D'Amato field goal with 27 seconds left in the first half made it 20-3 and it looked like Cal had finally worked its way through the first-half blahs and would go to halftime riding a wave of momentum.

But the Thunderbirds would not go down quietly. A bugaboo for Cal all day was poor kickoff coverage, and one of those episodes came after the D'Amato field goal. A 36-yard kickoff return by Josh Smith and an additional five-yards for a Cal offsides penalty (one of two offsides penalties the Bears committed on kickoffs during the game) put the Thunderbirds near midfield. Two plays later, a Steve Williams pass interference penalty on what should have been the last play of the half gave Southern Utah an untimed down from the Cal 37-yard line. And the Thunderbirds took advantage in a way that made every Cal fan who saw it cringe: SUU quarterback Brad Sorensen threw a 37-yard Hail Mary that Cameron Morgan caught off a deflection in the back of the end zone and, all of a sudden, Cal's lead was only 20-10 at the half. For all the domination the Bears had done statistically in the first half, it was not much of a cushion. 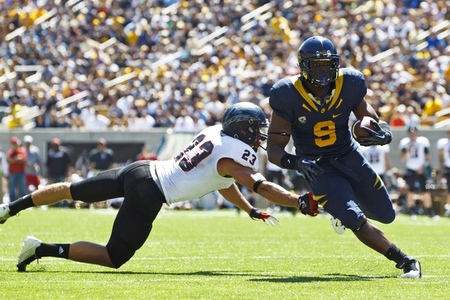 It got worse before it got better. Southern Utah took the opening kickoff of the second half and marched 75 yards in 12 plays, eating 6:33 off the 3rd quarter clock. Sorensen capped the drive with a 5-yard touchdown pass to Henna Brown and the Bears --- who had not possessed the ball for nearly an hour of real time at this point --- found themselves ahead by only 20-17.

But just as it did in the second quarter, Cal once again seized control in the fourth quarter. And this time, the Bears did it for good. Cal quarterback Zach Maynard (17 of 23, 229 yards, 1 TD, 1 INT) connected with brother Keenan Allen on a 19-yard touchdown pass off a good play-action fake on the first play of the fourth quarter to give Cal some breathing room. Then, three minutes later, the Cal defense made Sorensen pay for his first mistake of the game. With Southern Utah on the move and looking to cut into the Bears' lead again, Sorensen threw a bad ball that Cal cornerback Marc Anthony jumped on. Anthony intercepted the pass, returned it 61 yards for a touchdown, and Cal was suddenly in total control of the game, leading 34-17 with 10:47 left to play.

The rest of the game featured "ooohs," "aaahhs," and "d'ohs." The oohs: Allen electrified the Memorial Stadium crowd that remained with a 69-yard punt return for a touchdown, accomplished only after he had muffed the punt and got a fortuitous bounce to recover the ball. The aahs: with Cal's second-team offense in the game, Daniel Lasco took one the distance for a 77-yard touchdown. And the "d'ohs": D'Amato missed the extra point after the Lasco touchdown and the Cal defense looked lacking in intensity for the last two offensive drives by Southern Utah, both of which ended in touchdowns to allow the Thunderbirds to finish with 31 points. Though the last score in particular was in true garbage time against Cal's second string defensive unit, it surely does not sit well with the Bears to have given up 31 points to an FCS team that managed only three points last week against Utah State.

Despite all the warts in this one, a win is a win: wrap it up, I'll take it. Winning is, after all, better than losing. But Cal will need to get a whole lot better if it wants to be competitive next week when it travels to Ohio State. The Buckeyes won't be as forgiving of mistakes as the Thunderbirds were.