Q & A on the Southern Utah Thunderbirds with Carter Williams, Sports Director at SUU News

Share All sharing options for: Q & A on the Southern Utah Thunderbirds with Carter Williams, Sports Director at SUU News

Welcome back to another edition in our season-long Q & A Series! Last week, we talked Nevada. This week, Cal looks to win its first game in Memorial since October 2010. To find out about this weeks opponent, we talked to Carter Williams, Sports Director at SUU News, Southern Utah's online student news journal . As we really didn't know anything about the Southern Utah Thunderbirds, Carter was kind enough to educate us on his team - send him your thanks!

Answers after the jump. As always, Go Bears! 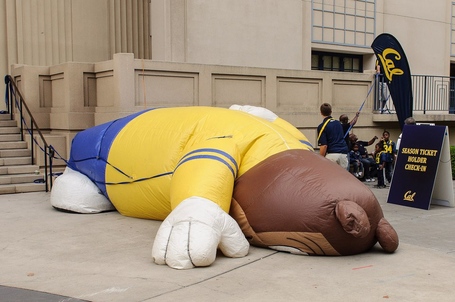 A symbol of Cal's luck against Nevada. The Bears look to turn it around and nab their first victory of the season tomorrow.

1. Who is the player on offense that Cal fans should know about?

Despite a bad start to the season, quarterback Brad Sorensen is definitely still the most important figure. SUU's offense runs efficiently when he's connecting on his passes and, well, last week showed everyone what happens to SUU's offense when he's struggling.

Sorensen is a 6'5 pocket passer with a laser arm. He's a transfer from BYU and has come off back-to-back 3,000-yard seasons, as well as 65+ completion percentage. No other quarterback in T-Bird history has put up numbers like it.

He's also gotten a ton of press leading up to this season as one of the best FCS quarterbacks in the country, and was named Big Sky Preseason Offensive MVP. In addition, he was the only non-FBS QB on the Johnny Unitas Golden Arm Award watchlist. There's been a lot of talk about him being a next-level QB and there were actually six NFL scouts at the SUU-Utah State game focused primarily on Sorensen.

2. Who is the player on defense that Cal fans should know about?

Defensive tackle Cody Larsen is definitely a presence for SUU's defense. The T-Birds have a stacked offensive and defensive line this year and Larsen is the most prized figure of the D-line. Like Sorensen, he's gotten a lot of preseason love and even been discussed a possible next-level guy.

Larsen is 6'4, 300 pounds and is the T-Birds' leading returner in sacks from last season at 6.5 sacks last season. He picked up half a sack in last week's loss. He'll be a contributing factor if SUU can plug the line of scrimmage.

3. Besides the money, does SUU see any upside to playing this game?

Cal is definitely the best team on the T-Birds' schedule this year, so it'll give SUU some experience against talent better than what SUU will see heading into its first Big Sky season. Cal will likely find ways to exploit the T-Birds' defense and offense in a way that SUU will be able to learn to correct those mistakes by Sept. 22, when the T-Birds start Big Sky play at Portland State.

Sure the money is great for a small school like SUU, but the experience should be beneficial for this year's team. 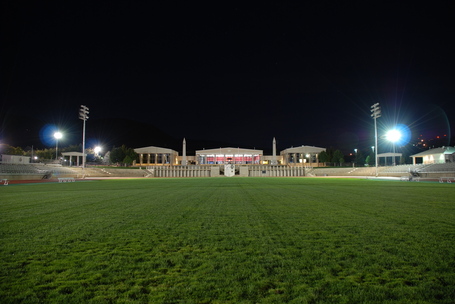 Eccles Coliseum in Cedar City, UT on the campus of Southern Utah University. By Jekyllman (Own work) [CC-BY-SA-3.0or GFDL], via Wikimedia Commons

4. How strong is the fan interest in this game and will a lot of people be traveling to the Bay Area?

SUU is only a fraction of Cal's student body size, or even many of the Big Sky schools out there. I'm sure you'll see splotches of red and black here and there at Memorial Stadium, but nothing crazy unbelievable. Everyone's excited about the game, but with classes underway and a giant drive to Berkeley, you won't be seeing many students there. Alumni now living in California might be out there, there will be SUU administration officials out there, but that's about it.

Just on a side note for those about to Wikipedia the size of Southern Utah, we max out at about 8,000-10,000 fans at our home games. There's roughly 8,000 students enrolled at the moment.

5. What does Southern Utah need to do to win this game?

There's a lot of things, but it starts with the offense. The defense got off to a rocky start last week, but settled against a really underrated and talented offense in Utah State, and it was the defense that propelled last year's somewhat surprising 41-16 victory over UNLV.

However, SUU's running game was completely non-existent and the passing game was uncharacteristically bad last week in Logan. You won't get much done when you average just over two yards per carry, and it basically just left everyone knowing Sorensen was going to drop back to pass because the running game wasn't there. Brad also has to get back to the numbers he's used to at SUU. Special teams has to be perfect.

There's little to no room for error if SUU is going to win Saturday.

Honestly, it wasn't what USU did but more of what Sorensen did. The Aggies' only sacks happened after a play went on forever, but they almost never applied direct pressure during the game. However, Brad kept overthrowing targets and appeared to struggle with the handle of the ball throughout the game. His only interception came with about 10 seconds left in the game when SUU was trying to force a touchdown in a meaningless drive.

He didn't say anything afterward about fundamental struggles, but Head Coach Ed Lamb said Brad struggled throughout the game with how slick the football was during the game. It was fairly obvious something was wrong during the game because he kept on missing targets he typically hits.

Keenan Allen scored on a brilliantly executed reverse against Nevada. Can he do it again against Southern Utah?

7. SUU got into a quick 21-0 1st quarter hole at Utah State, but was outscored only 13-3 the rest of the game. Why the slow start? Was SUU genuinely more competitive in the last 3 quarters?

I think there were a lot of just season-opening jitters. Brad didn't complete a single pass in the first quarter, so that's where the 0 comes from. As for SUU's defense, the secondary was extremely shaky in the first quarter and Chuckie Keeton took full advantage. He threw a pair of perfect strikes. One of them actually happened on a quick snap and it caught the T-Bird defense totally off guard.

If I were running Cal's offense, I'd do completely the same thing Utah State did and test out the secondary immediately. There's always a huge step up in competition and players from the FBS and FCS, but it's extremely noticeable in receivers and defensive backs. SUU lost a pair of great defensive backs from last season, including Dion Turner who was just recently cut by the Packers. That said, a big reason for last year's beatdown of UNLV came from three defensive touchdowns - not that I'd have the balls to compare UNLV to Cal.

If I were running Cal's defense, I'd spend more time focusing on when SUU is going to pass. If SUU's running game is as dormant as it was last week, you don't even have to worry about it. Sorensen, despite those Tebowesque numbers last week, can burn you quickly. If you can get pressure on him, that's a positive too. It's always a positive for any defense to get the opposing quarterback uncomfortable.

9. Has SUU ever invited The Fabulous Thunderbirds to perform at the school?

Believe it or not, I'm pretty sure this is the first documented case of any association between The Fabulous Thunderbirds and SUU ever. That deserves an award or something for commemoration.

We had the Goo Goo Dolls over once and we usually just play AC/DC's "Thunderstruck" before ballgames - regardless of the sport. It's gotten so repetitive that I'm positive that 90 percent of our student body believes that's actually our school fight song.

10. Who would you like to punch in the face?

I don't really know how to answer this, but I compiled a top five list regardless:

5. Every single politician
4. All replacement NFL Referees
3. Every Weber State fan from the beginning of time
2. Any IRS agent out there
1. A-Rod. Definitely A-Rod.

Apparently I have anger issues.