Here's another great breakdown sent to me by Liffeytroll.

After all the great feedback and encouragement I received from my last breakdown, I wanted to write another one. After watching the game I didn't know whether I wanted to do a breakdown of any of the game, thinking it would be too depressing for me and that no one would want to read it. Like everyone else I left Memorial stadium upset and angry, not because of the talent level of our players nor because they did not play hard but because they were so obviously unprepared for the game. Even discounting the Bridgeford fiasco, there were too many substitution and formation penalties and the contrast in special teams between Nevada and Cal was vast (and could someone please get Keenan Allen the correct size cleats?). Then I watched a replay of the game and decided there was something worth writing about.

I decided to focus on areas where the team performed well and where they could improve. Let me start with my favorite play of the game (5:52 3rd quarter). Cal is going to run a reverse. Not an end around but a true reverse where Zach Maynard will hand off to Isi Sofele and Sofele will pitch it back to Allen who is running the reverse direction. The offensive line sells the reverse misdirection by double teaming at the point of attack (right side of the line) and blocking at the second level (linebackers) on the left side of the line leaving the defensive linemen the unblocked. Sounds like disaster for the Bears on this play since Allen will be running toward unblocked players... 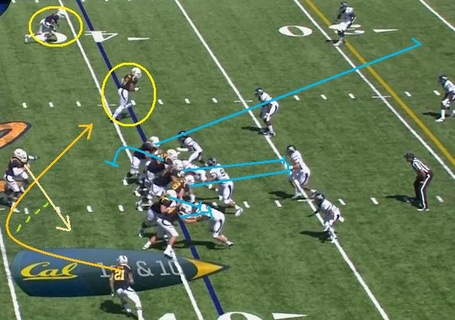 But Cal is going to use skill players, led by Maynard, to get key blocks to spring a big play. The Nevada linebackers and defensive backs are frozen by the misdirection and won't know what hit them. 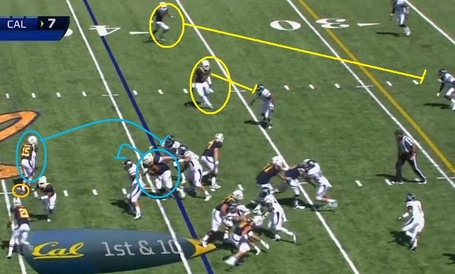 Maynard springs Allen and Richard Rodgers and Bryce Treggs flatten a couple of Nevada players to give Allen the chance to do what he does best, run with the football.

This was a great job by the coaching staff to get the ball into Keenan Allen's hands and the result was a touchdown when we needed it most. What excites me about the play is the willingness of the skill players to block and the ferocity with which they delivered those blocks.

This frame looks more like the WWE than the Pac-12. 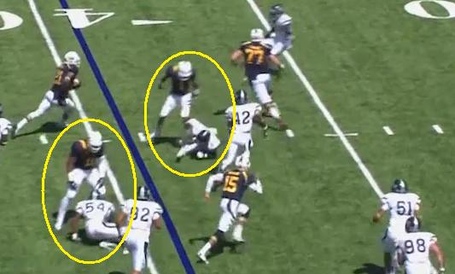 If that was a strong point for the offense where is an area where we can improve?

With 4:51 left in the 4th quarter we have tied the game and our defense has forced a punt, we are pinned inside the 15 yard line but we have a chance to take control of this game. Unfortunately, Matt Summers-Gavin has just left the game with an injury and Nevada is going to try to exploit our new weakness by blitzing Maynard's blind side.

Nevada is showing 5 rushers, they are lined up with two on the right, two on the left and one over the center. The circled linebacker is lined up outside Cal's tight end, it will be a tough block for the new right tackle to make but not an impossible one. There is no audible or change in protection because there is a Cal lineman for each Nevada rusher. 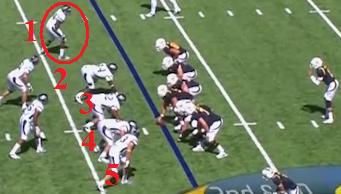 On the snap, however, Nevada drops the defensive end (#5 above) into coverage and blitzes their inside backer on the right side of Cal's formation. Cal's tight end releases into coverage and there is no running back in the backfield. 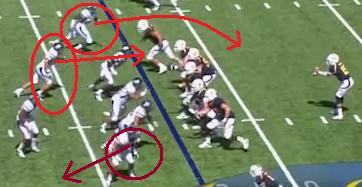 The right tackle is left with two men to block. The standard instruction is for all linemen to block the inside rusher because the outside rusher has farther to go which gives the quarterback a little more time to throw. 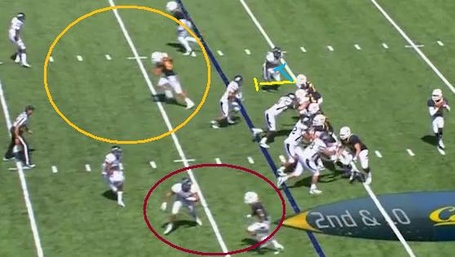 Blitzing two linebackers from the same side of the field has overloaded the right side of the Cal line but it has opened up a huge hole in the pass coverage. Quarterbacks are taught to look to this area because that is where the open receiver will be. Maynard, however is looking the wrong way and does not see the free blitzer nor the wide open receiver coming out of his break at the perfect time. 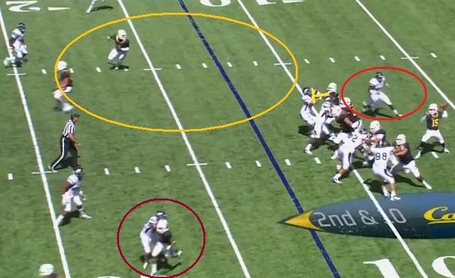 Not seeing the open receiver Maynard pulls the ball down and takes a crushing sack. 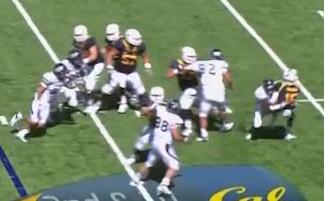 While Zach Maynard did a good job of not forcing a throw and protecting the ball preventing a turnover deep in our own territory, this play was the turning point of the game. With the loss of yardage we have to punt giving Nevada a short field and the opportunity to run time off the clock and score.

Blitz recognition is an area of the game where Cal needs to improve. Being in the shotgun means that the quarterback is square to the line of scrimmage and should have a chance to see blitzers before deciding where to throw the ball. There should be no "blind-side" or the period of having a blind spot should be reduced. With no running back in the backfield the protection was going to be compromised and the play was designed to have a quick throw.

The coaching staff also has to know the limitations of its players. If Maynard cannot make the correct first read yet, then a different play has to be called. An NFL offensive line that has been playing together for a while might be able to handle this pass rush (most likely be "passing off" rushers to other linemen in order to free someone up to get the edge blitzer) but a collegiate line playing together for the first time cannot. Should the tight end have stayed to block? Should a back have been left in the backfield? Should a roll out play have been called? All of these things will have to be considered going forward.