In part 1,we looked at all the pre-game pomp and circumstance. Then, in part 2, we looked at the game (speaking of which AVERT YOUR GAZE!). Now, we get to look at a wall! Yay! Well, not just any wall. The wall at the stadium. After the game, my friends and I decided to head over to the west side of the stadium and check out the new concourse. Even though I've been going to games since the 90s, I have barely spent ANY time in that side of the stadium.

But you didn't have to spend a lot of time there to know that it was a dark, dank hellscape where random puddles of what you hoped was water seemed everywhere. Light could barely penetrate into its beating heart of darkness. And a lot of it seemed to just be piles of dirt. I somewhat exaggerate, but sadly, not THAT much.

Now, it is totally different. It has a ton of light with amazing views of Berkeley and the SF skyline. Plus, it has this cheery blue wall everywhere. I thought it might be cooler to have gold accent squares somewhere, but I am also not an interior designer. 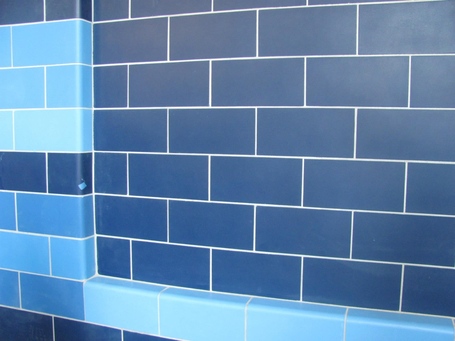 After the jump, more photos and videos (from valued reader CalBear81) of the stadium. If you loved the east side of the stadium, you will LOVE the west side. GO BEARS!

Look at how amazing this is. Maybe to other fanbases, it seems like, well, a corridor or a concourse. When I look at this, I go "BEAUTIFUL! IT'S SO BEAUTIFUL! I HAVE NEVER SEEN ANYTHING THIS GORGEOUS IN MY LIFE!" 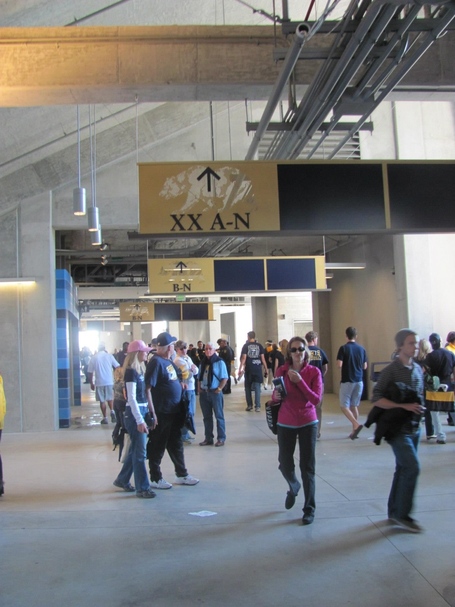 While the east side had some food options specific to the area (like House Of Chicken and Waffles and Top Dog), the west side options appeared to be more general. Not necessarily bad, but I what I saw just seemed like a stadium food place. Except (as you'll see in the videos) with more high end food. 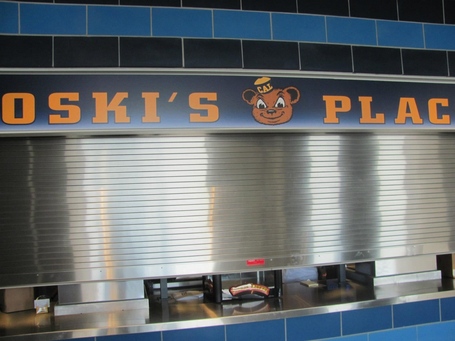 Look at the views here from the concourse. Look at the gorgeous plaza. 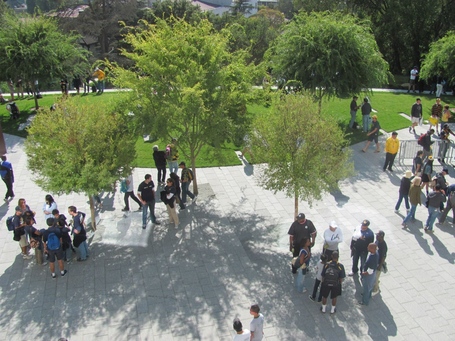 Here is the SF skyline in the distance. 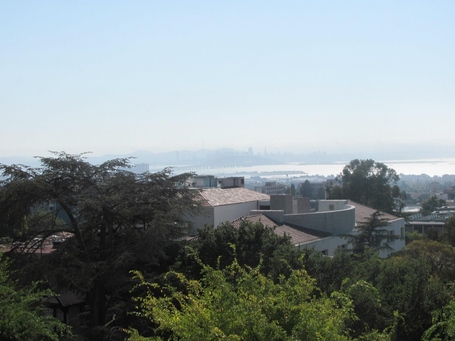 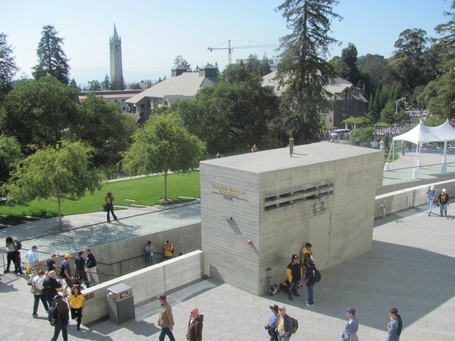 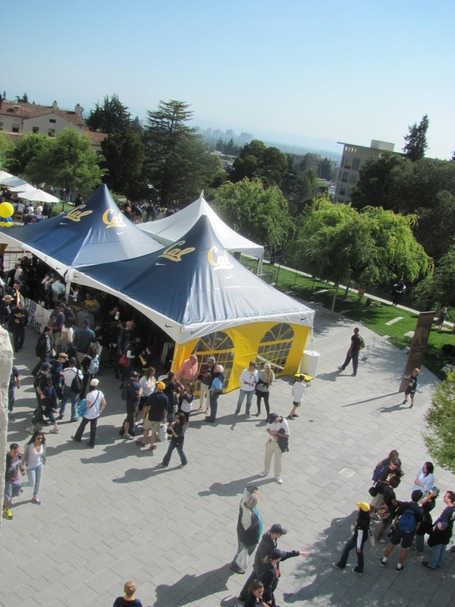 We tried to head up to the 1%er suites. We got on the elevator and headed up. Fingers crossed! But our lack of wristbands did us in. The security guards at the top wouldn't let us in. I tried to get in by saying that we were so sad after the game and seeing all the suites would bring us great happiness. It did not work. I failed us all!

We headed down to the Hall Of Fame Room, which had a bunch of posters illustrating great moment in Cal sports history. 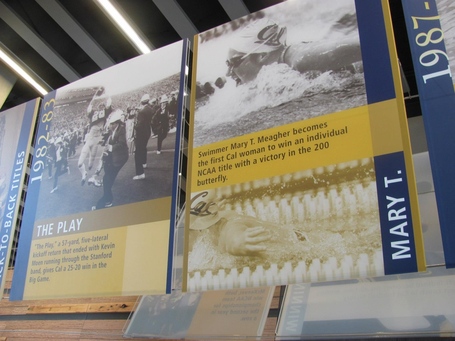 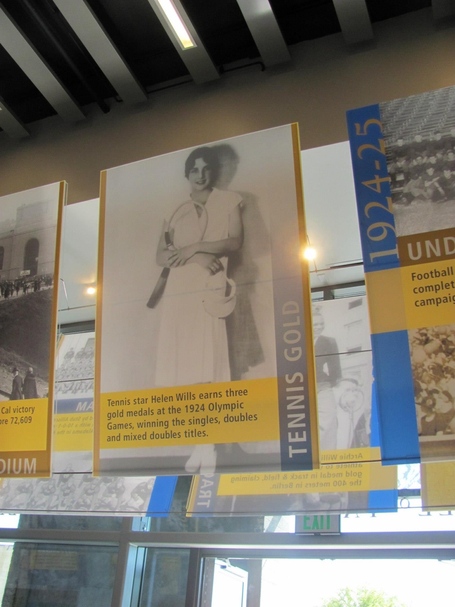 And out to the plaza itself. This whole section used to be a lot of nothing and a parking lot. Look at the outside of Memorial Stadium. I do not know what they did, but it is so clean looking now. It just sparkles. Did they give the stadium wall its first bath in nearly 90 years?? 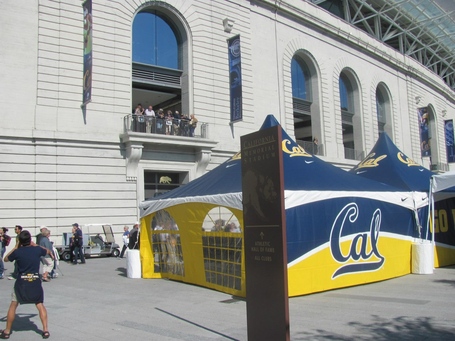 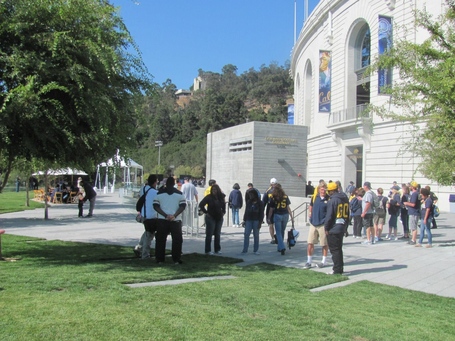 Look at the gorgeous lawns. There were people just lounging in the sun. Yes, the loss stung, but the stadium's grounds make up for it. This must be EXACTLY what people were thinking about when they designed it. 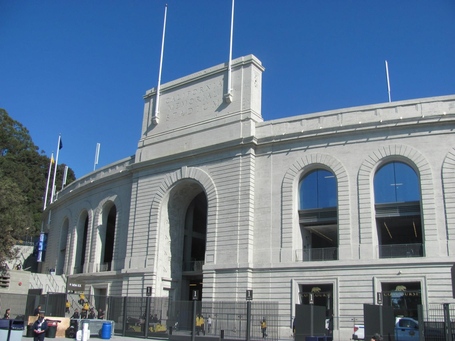 Here is the Andy Smith bench. This used to be in the stadium itself on the Cal sideline. However, they moved it out here. I think they also added on to it, because I do not feel like it was this long previously. I could be wrong. 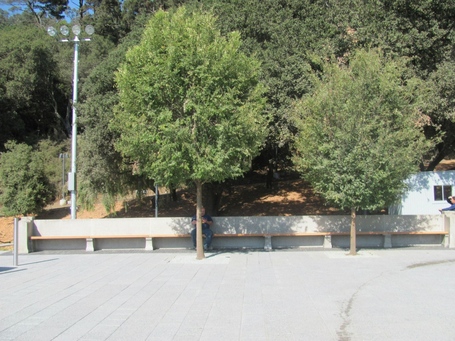 Here is the inscription, which is in the middle of the bench. Note that the seating wood appears to be brand new. 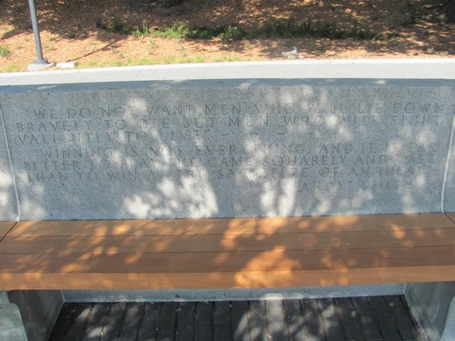 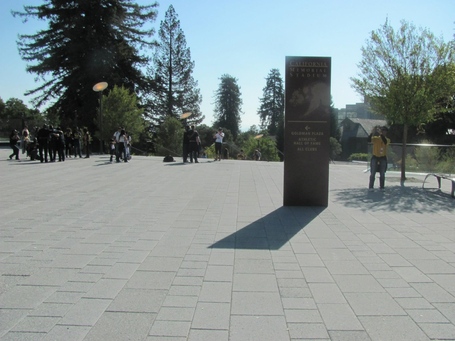 On the way out, I noticed this gentleman holding this sign. It says "$500 mill con job we warned you." 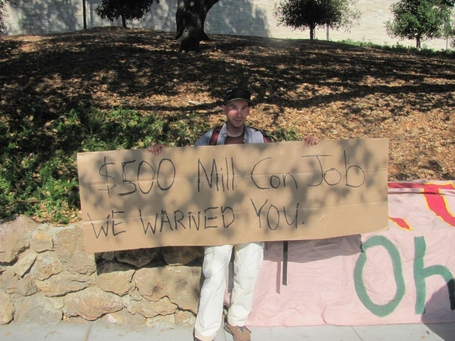 This sign says "Native Burial Ground Ohlone Nation" and then it says something in apparently the Ohlone language. I spoke with the man in the above photo and he said that he didn't know what it said, but he suspected it said People's Park. He also said that others were supposed to show up, but failed to do so. He was the only one there. How apropos. 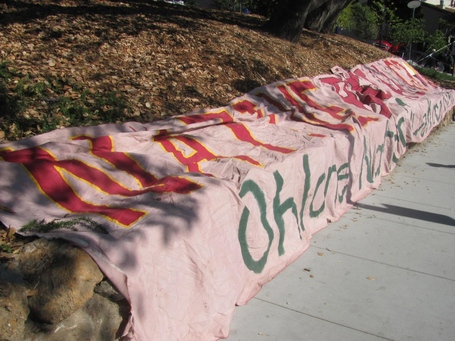 And there we go! A bunch of photos. That you saw. Hope you had fun! GO BEARS!