Well, the game sucked, so let's look at it some more!

Share All sharing options for: Cal v. ASU Photo Essay I: First Half 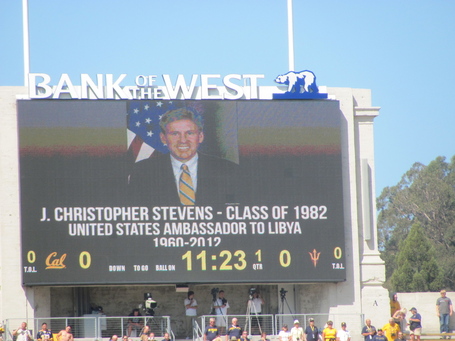 Before the game started they had a moment of silence for the Libyan Ambassador who was a Berkeley alum. A touching tribute to a genuine American hero. Perhaps that was the high point of the day as Cal sadly lost to ASU in what was hoped to be a far easier victory.

Coach Tedford has had a lot of success against ASU in his career. After a rocky loss to USC, I hoped that we could right the ship at home on a gorgeous Berkeley saturday. Sadly, it was not the case. A penalty-loving Cal team couldn't overcome its own mistakes to take down the Sun Devils. I've really sold you on seeing photos of this, haven't I???? Remember, to see the photos in a larger format, just click on them. 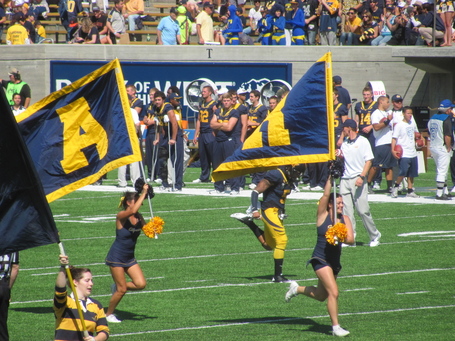 Here comes the team running out onto the field! 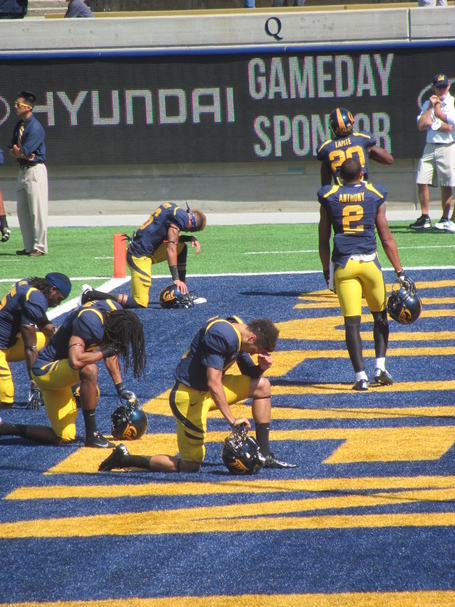 The ASU QB Taylor Kelly looked really good out there. That is the extent of my analysis. I'm no The HydroTech. I'm not even *A* HydroTech! When I'm writing this stuff, I'm just trying to provide some text in between the photos. Don't think too deeply into it. 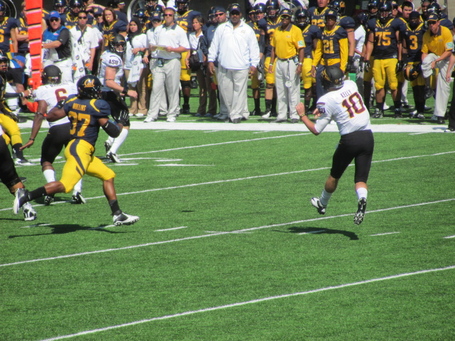 It was National Championship week, so they had a lot of the great Cal athletes out to take a bow. Here is Glen Ishino, a national championship pommel horse winning gymnast. GO BEARS! 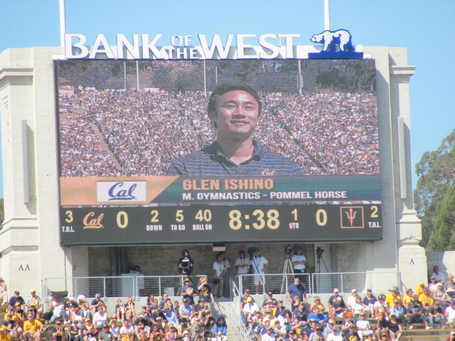 Plus, they gave out free fedoras! HECK YUP! I actually failed to get one. I eventually managed to convince a friend of mine to give me theirs. I, then, wasted an afternoon of begging by giving it away to another friend who failed to get one. What an odd combination of selfishness and selflessness.

The fedoras were actually mini-fedoras (so popular a few years back) and had a ribbon around it that said "bear backer" on it. Kinda cool! 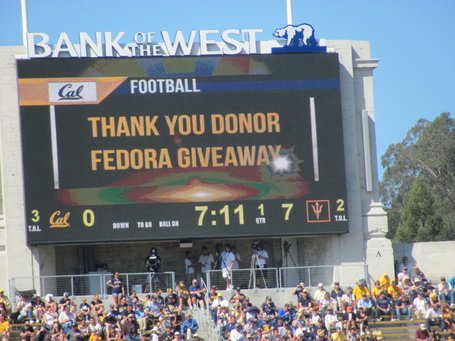 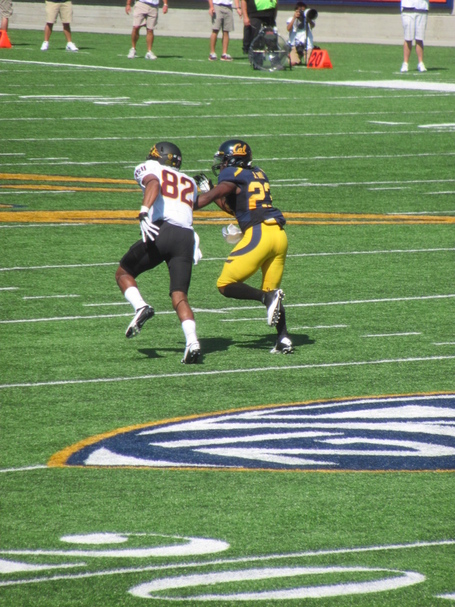 They had a video about Thomas DeCoud and his success so far in the pros. 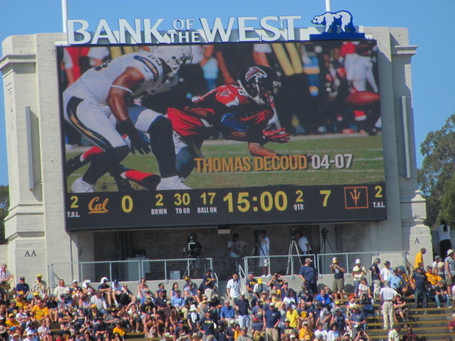 If you missed it, DeCoud got some press this week because he played the Meow game (from 2001 movie Super Troopers) in an interview on SportsCenter. Read this link for more info. Of course, Cal fans love him more for this great block several years back:

Another great championship winning Cal athlete! There were many more, but I didn't get photos of them all. They had the information on them or clips of them waiving to the crowd at most of the breaks. 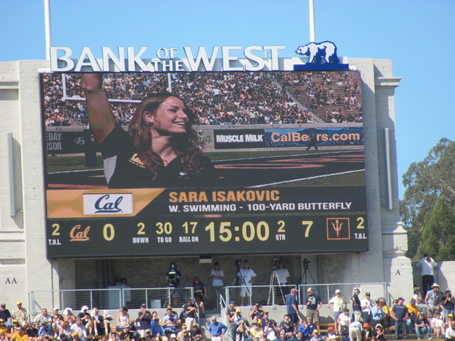 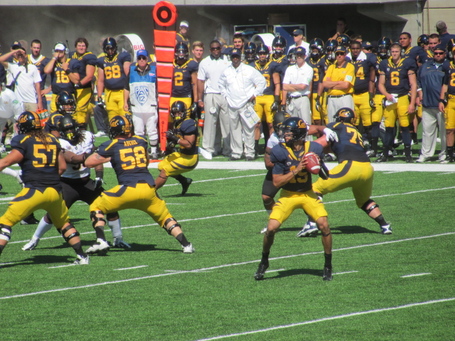 I've been going to games since the late 90s and this was the first time I've ever sat on the west side. It was so weird. I sat the entire time. What? It wasn't brutally hot. WHAT?!??! I could see the partially filled (SADS) student section. I could even see the Cannon, literally a first for me. The west side is OK. I could see how people like it. 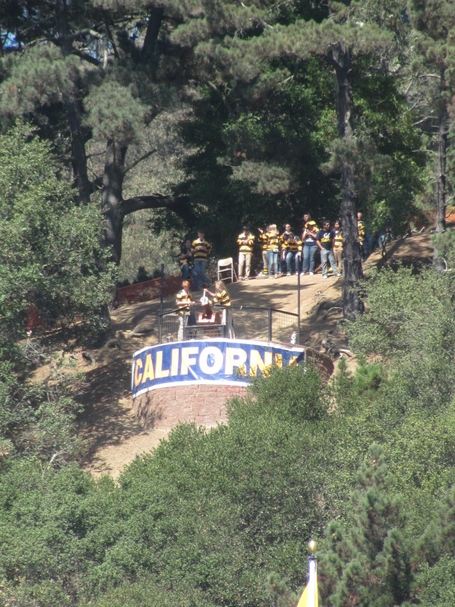 This was one of the sideline reporters. While the massive press box has provided additional shade for those 1%ers on the west side, not everybody over there was cool. This guy seemed hot and wore a towel over his head for shade. 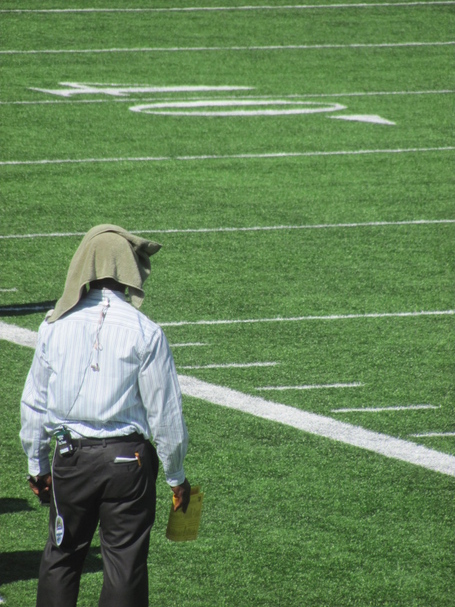 This was a highlight of the game. ASU punted and then an ASU player inadvertently touched the ball. The refs initially did not call it, so the play continues. The ball rolled several more yards, but then the refs noted the the first touch and brought it back to the initial point of contact! Yes. This was a highlight for the game. 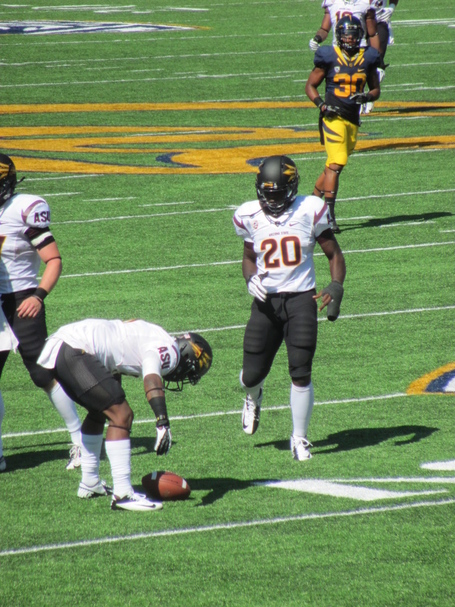 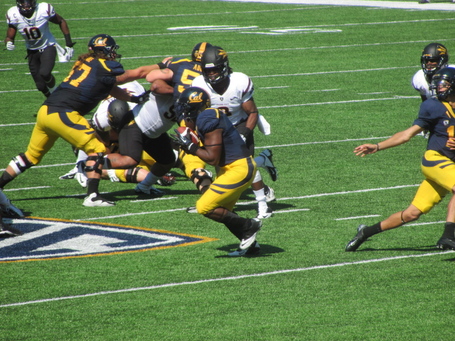 Bryce Treggs, who is #1 here on the left, seemed to play great. I am not sure if the numbers reflect it, because sometimes he was open, but the ball wasn't quite sent his way. I think he has a bright future at Cal. 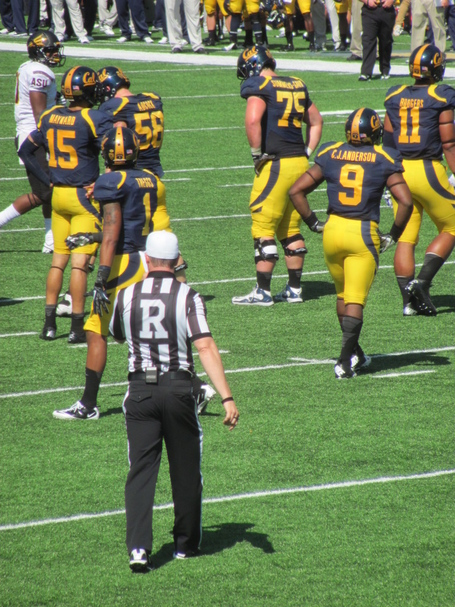 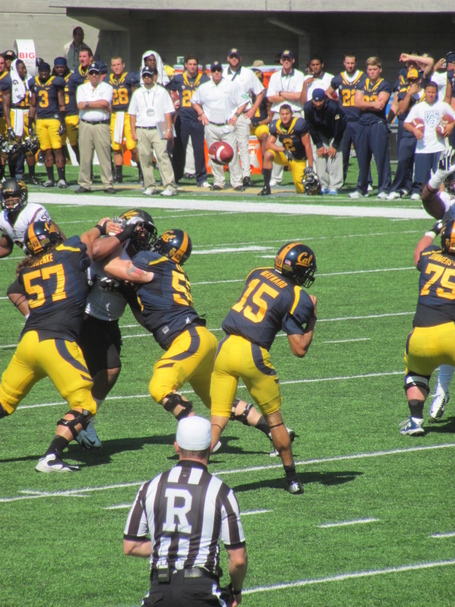 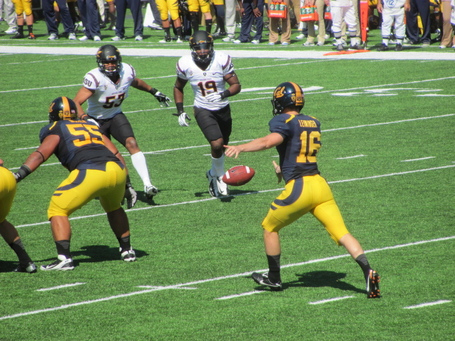 Weird to be so close to the moving camera man. What an odd job that has to be. 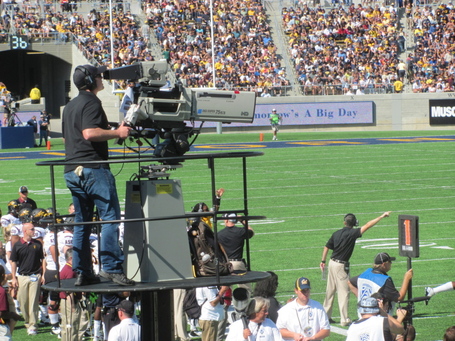 This was a cool stop here where Cal held a charging ASU offense to *only* a field goal. They attacked the QB, stopped a run, and forced an incompletion! 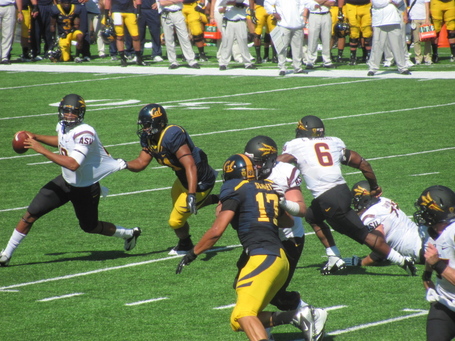 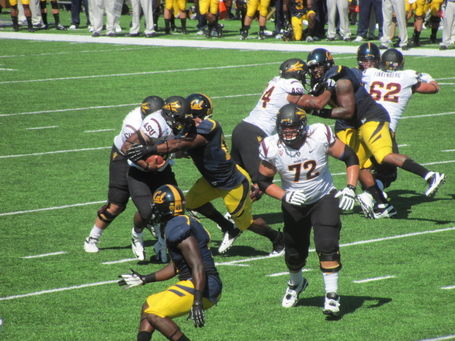 The camera man had a sheet of paper with what appeared to be key players to keep an eye on. I couldn't quite tell what it said 100%, though. 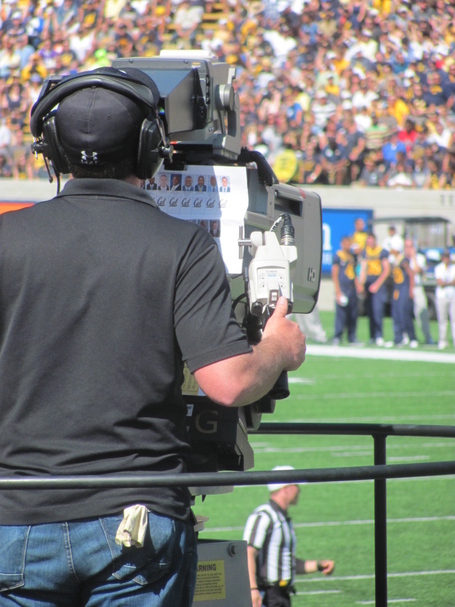 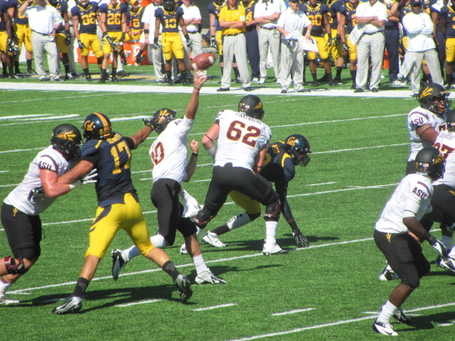 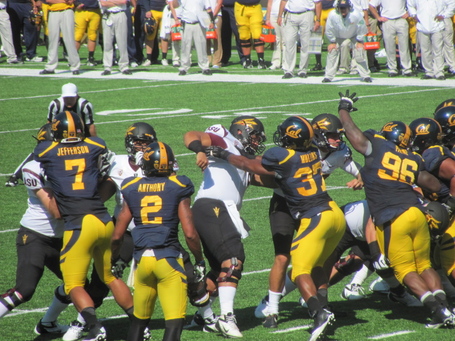 Zach Maynard seemed to run a lot. I couldn't tell if they were designed runs or a lot of scrambling because of poor pass protection. 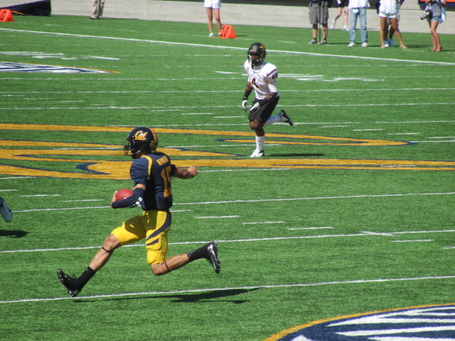 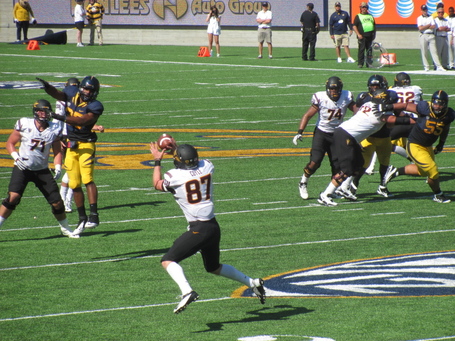 It was 17-7 going into the half with Cal showing few signs of life. Definitely one of the more depressing first halves I have experienced at Memorial Stadium. There was hope for the second half, though. Would Cal pull it out? Spoiler Alert: No.