In part 1, we looked at lot of the pre-game excitement. People were pumped and the place was PACKED! It was not a 100% sell out, but damn near close. Look at the sea of humanity. 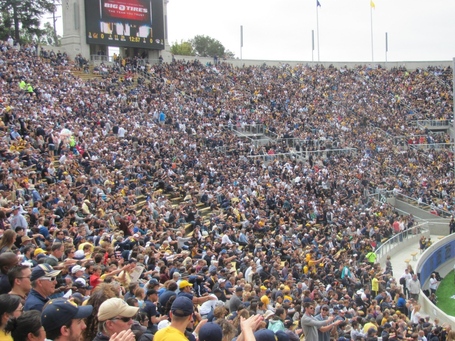 After the jump, more game action to whet your whistle with (if your whistle is currently unwhet, of course). Remember, you can make any photo bigger by clicking on it. GO BEARS!

Here are some videos of the crowd, thanks to valued reader CalBear81:

Here is kick off:

And the first play from scrimmage:

They still had the videos of the players talking. However, there were two problems. The sound was a bit tough to hear and no subtitles. So, I don't really know exactly what they were saying. I think the subtitles were really helpful and hope that Cal Athletics considers bringing them back. 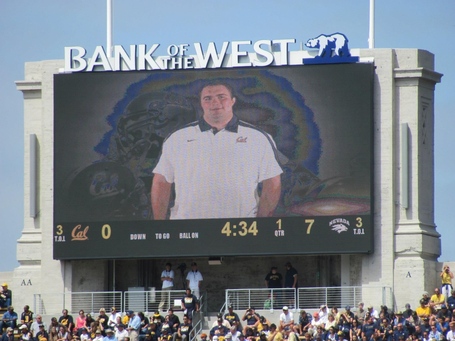 So, let's game some game shots in. Bridgford was in for most of the first quarter, but the team never quite made it down towards me, so I have no real good shots (if you are to think that any of my shots are even that good) of the action. 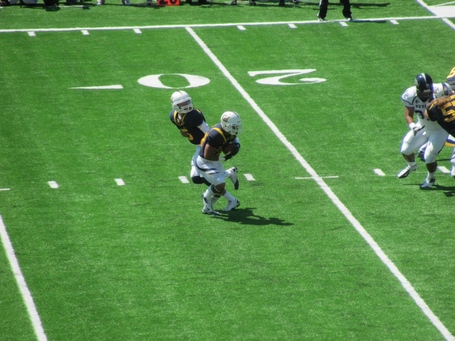 They were celebrating the Steel Bridge team, which is apparently something that exists! According to googles:

The Student Steel Bridge Competition is an annual contest that challenges engineering students to design and fabricate the most structurally efficient, economic, stiff, and light bridge. This important competition offers future civil/structural engineers the opportunity to show their skills in steel design, steel fabrication, and teamwork.

In the fall semester, the Cal Steel Bridge Team works on the design of the bridge. All members participate in design teams to determine the best design that follows the rules for the year. By the end of the design segment, every individual is proficient in AutoCAD and SAP2000. After determining our design, the SolidWorks team produces drawings that will be used by the shops for fabrication. In the spring semester, the Cal Steel Bridge Team heads over to one of two shops: Davis or Etcheverry. In the shops, students fabricate every single member and connection on the bridge. After fabrication, we put our construction team to work on putting our bridge together quickly and efficiently. Overall, it's a lengthy but rewarding process!

Based on this photo below, I believe they were national champions! I couldn't quite hear what they were saying, but that sounds good to me. GO BEARS! 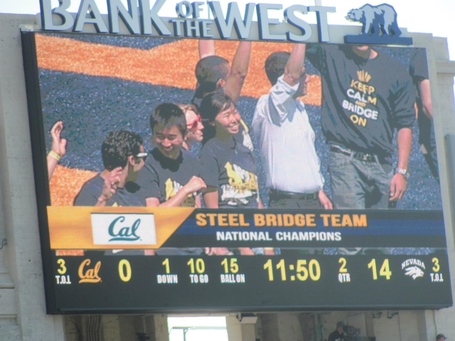 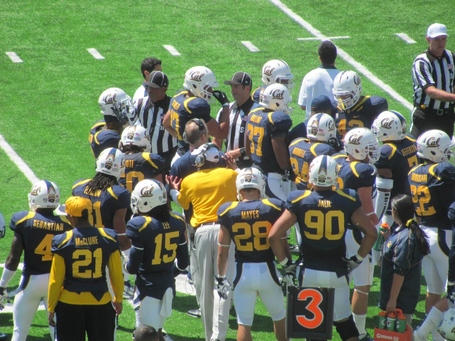 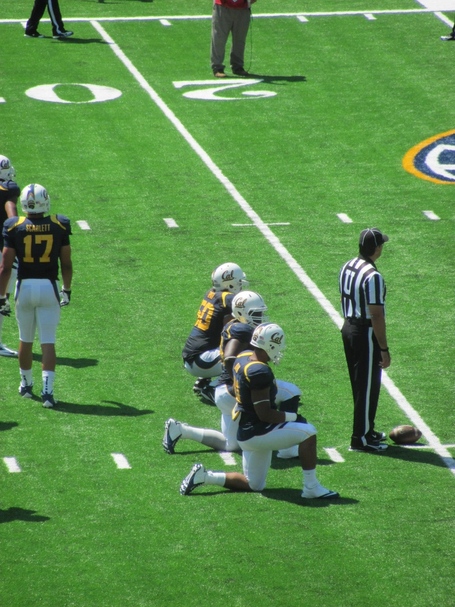 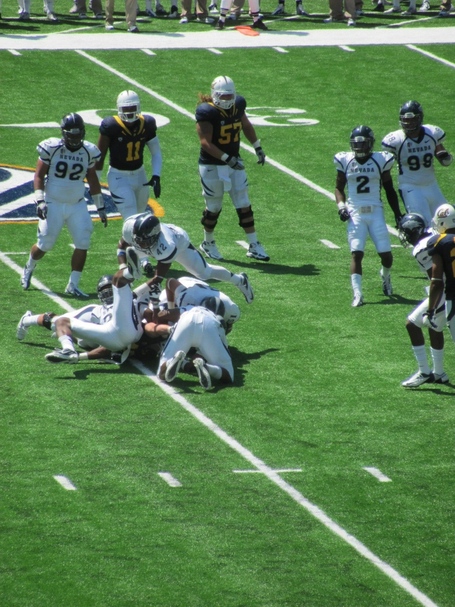 Soon, it was halftime. That means MARCHING BAND! It was the Calchella show, which you can see here: 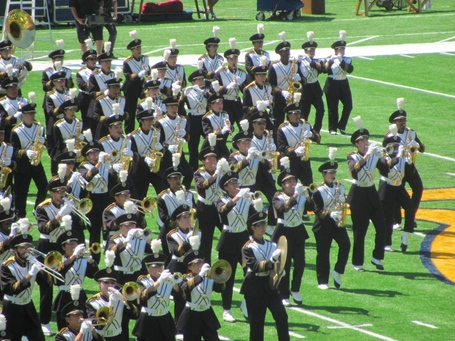 The students did their card stuns and then continue the grand tradition of throwing the cards EVERYWHERE. It is raining color! 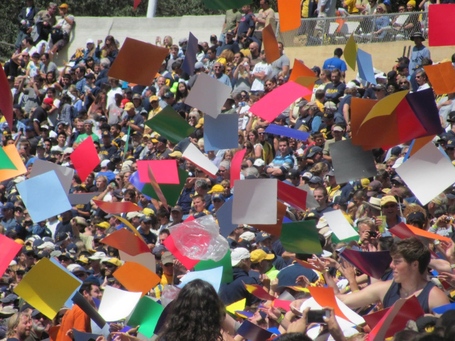 Here is a prime example of that pistol offense, which seemed to confuse Cal all day long. I'm confused right now! Who has the ball??? 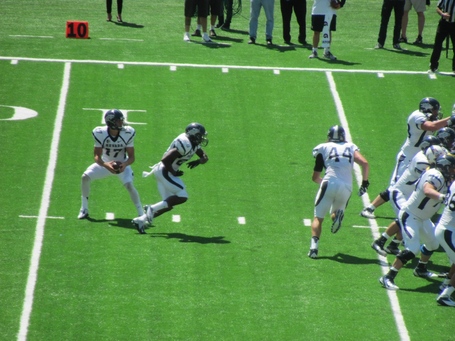 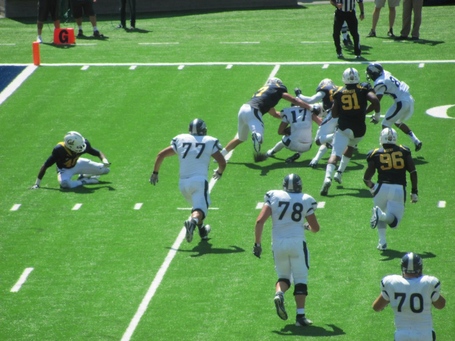 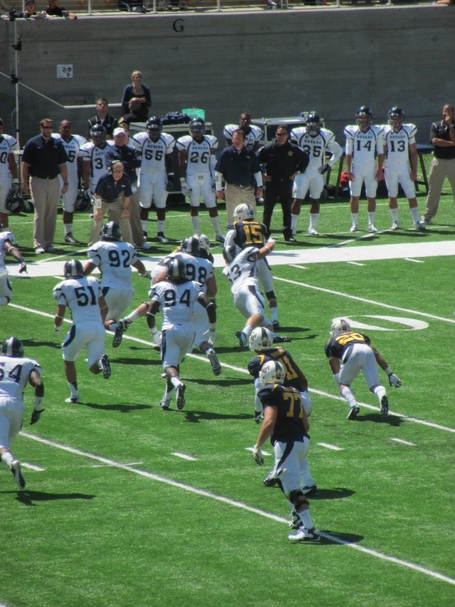 I believe Cal got this fumble here. 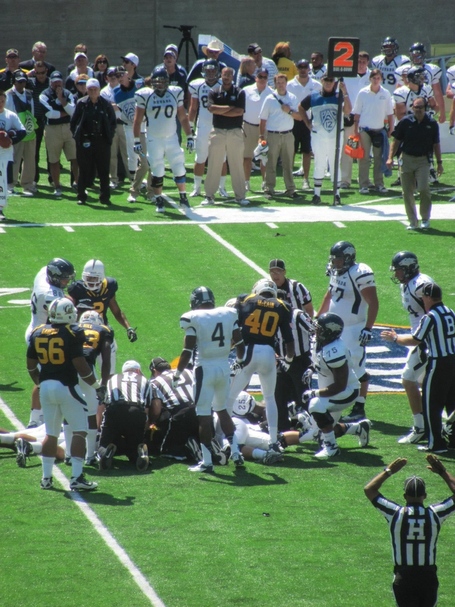 And quickly turned it into a TD thanks to a Keenan Allen scamper! 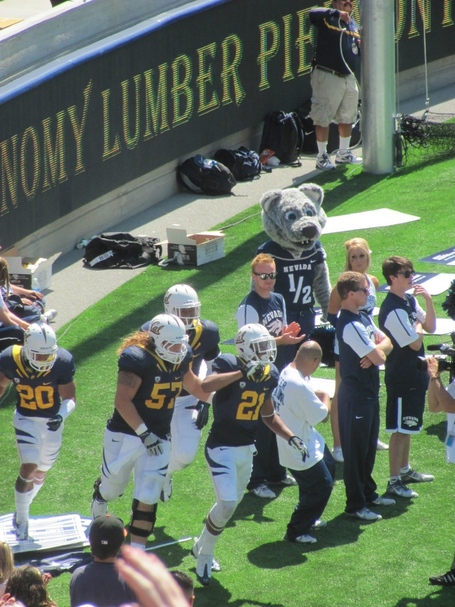 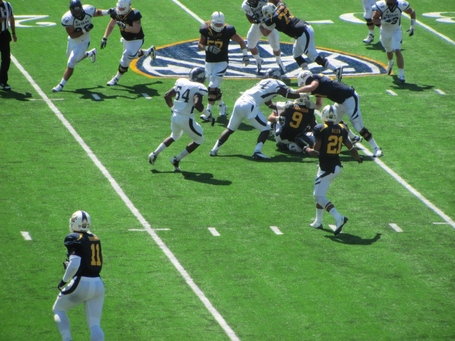 Here is C.J. Anderson talking about who his favorite NFL player is. Since the sound was muffled and there were no subtitles, I do not know who it was. 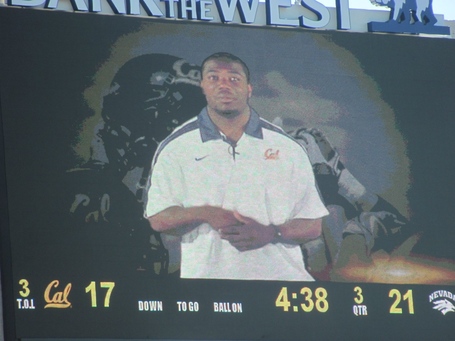 The Nevada QB (seen here slinging it out) definitely had a good day. Sads. 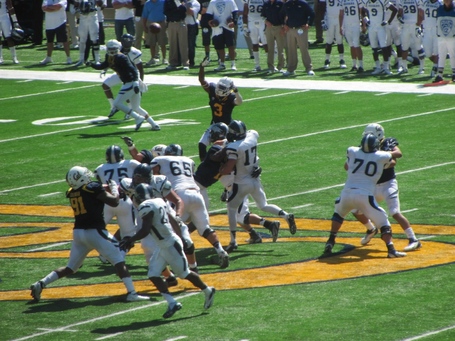 They showed some clips from their #BackInBerkeley series, which was a great series. Cal marketing has definitely taken steps in the right direction and I am hopeful that it will continue to improve. 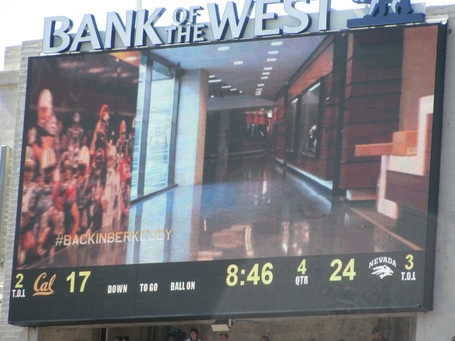 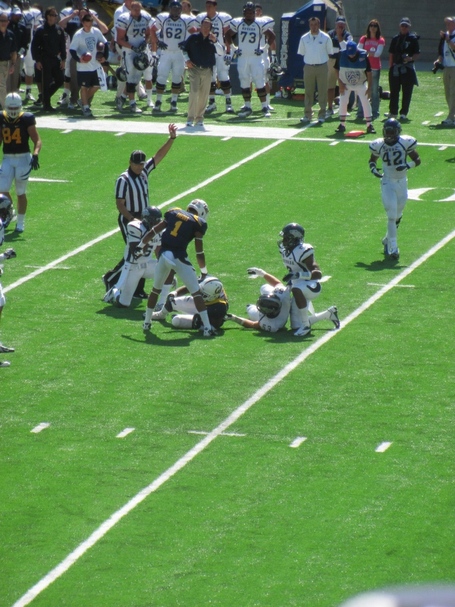 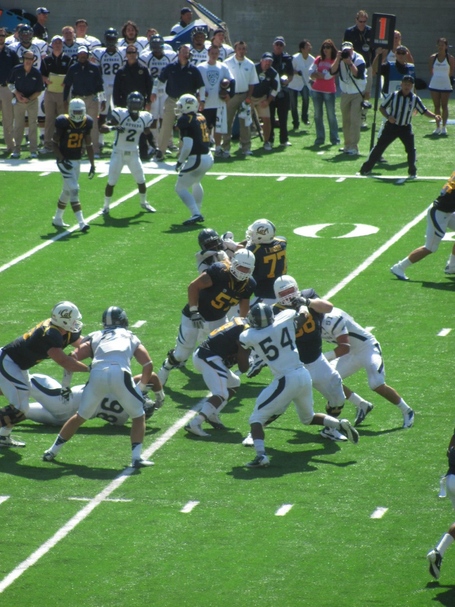 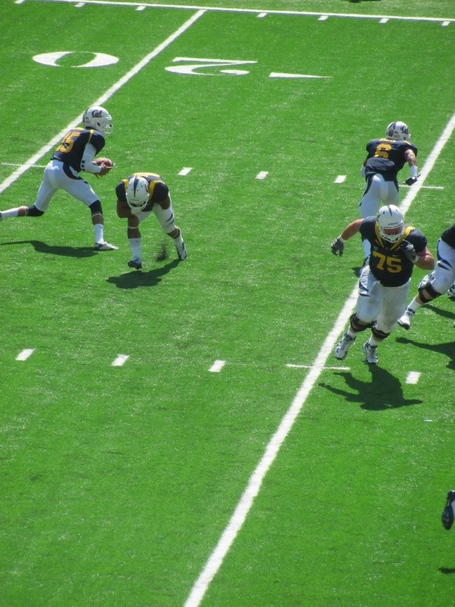 And a TD! This tied the game up (IIRC) and the place was going bonkers! 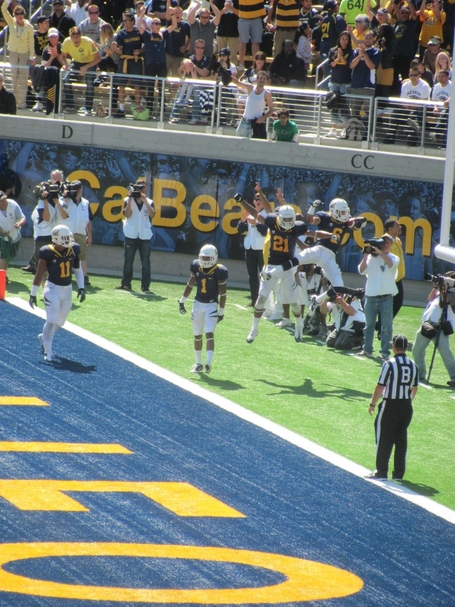 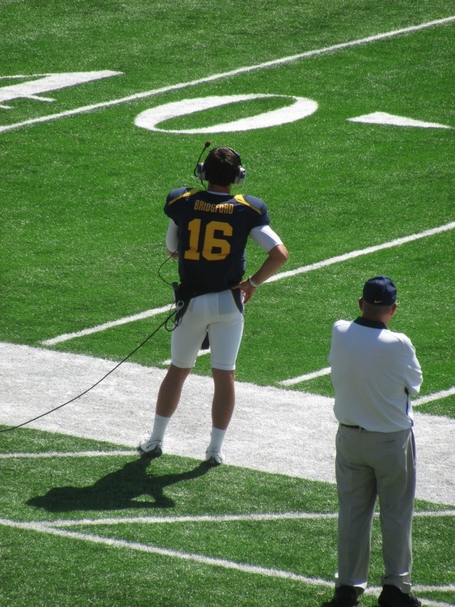 At this point, Cal had only 1 time out remaining. This sign was wrong. 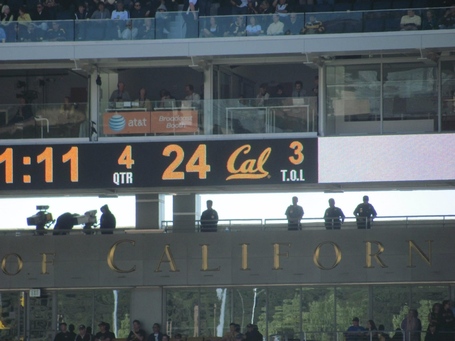 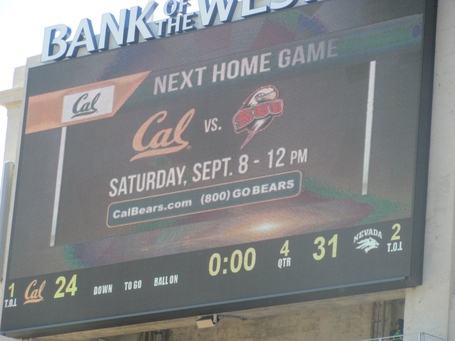 Up next, post-game action. Mostly me just walking around taking photos of New Memorial and how AWESOME it is. Also, we tried to sneak into the 1%er seats. Did we make it in? CLIFFHANGER!!!!!!!!!!!!!!!